It has been way too long since my last Reader Home Tour, and I am positively delighted to take you inside Sharon from Novara Way‘s home today! If you do not already know Sharon, she is one of the kindest and most thoughtful bloggers in blogland… and she happens to have exceptional taste!

Sharon describes her style as “French, Asian, coastal, ranch,” and while this description gets a lot of “funny looks” from new friends, she says once they know her, they understand she is constantly moving things around.  Sharon is also a fellow bargain hunter, always looking for one of a kind vintage treasures. And she certainly has amassed an incredible collection! 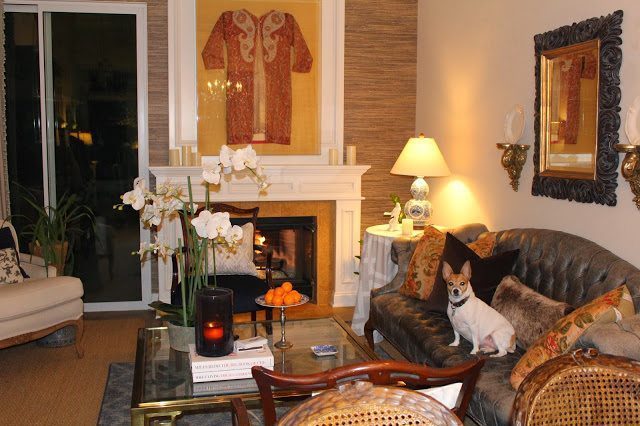 Sharon lives in Southern California with her Jack Russell, named Chubby. “I have always found animals in the shelter,” she said. “Without this turning into an Oprah show, let’s just say that hosting animals has taught me so much about myself. I will never have a home without one living in it.” 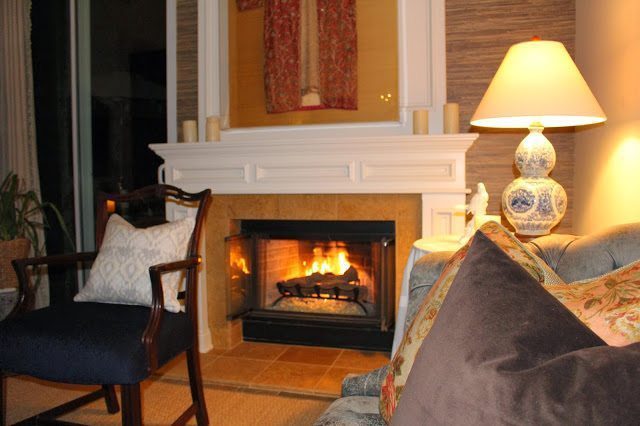 “This Asian beaded number is from a local garage/tag sale,” said Sharon. “It was off to the side, caked with dirt and dust. I asked the homeowner what she was asking and she told me it wasn’t for sale. We started talking, and she took my number. She wanted to make sure her kids didn’t want it! ( I think the dirt build up was a good indication) She called me up and it was mine. $400. Not the deal of the day, but sometimes…” 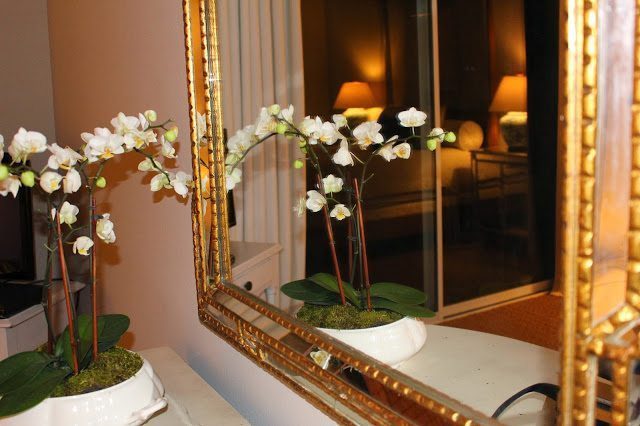 “My fun surprise was this mirror,” said Sharon. “I saw it at an antique mart and kept thinking about it. I went back to purchased it. $450. The very next day a friend and I were online and an antique store in New York was brought up in conversation. So we Googled it, and took a peek. To my surprise the mirror, a smaller size, was there and priced at $4,500. Venetion mirror with Portuguese trim. I was thrilled, but then again, I bought what I liked!” 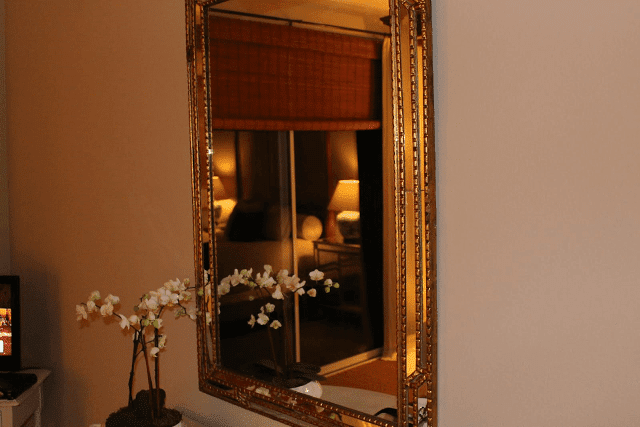 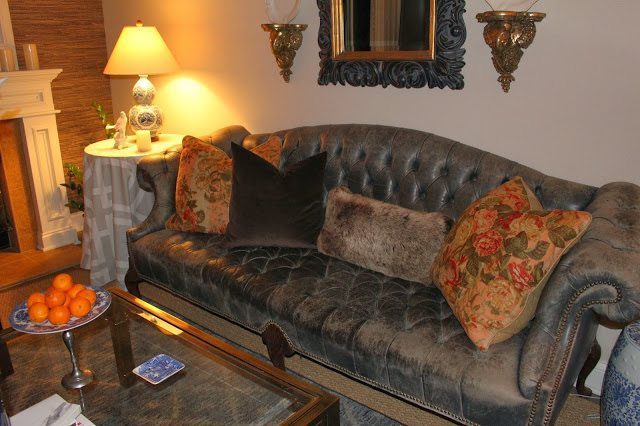 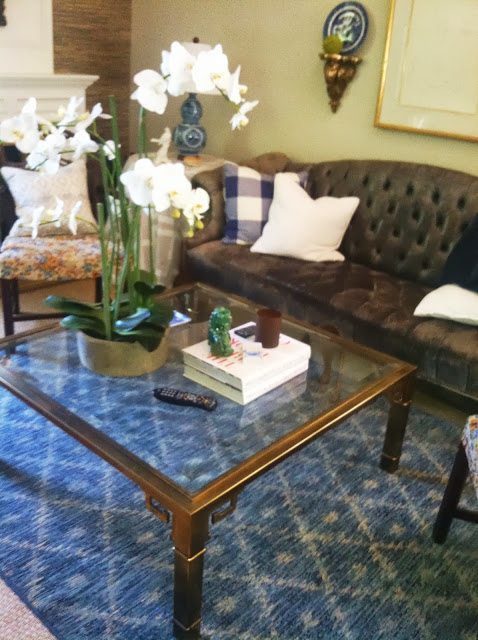 The brass Greek key coffee table was a gifted from a neighbor who no longer wanted it. Sharon recently found an identical one on sale for $1,100! 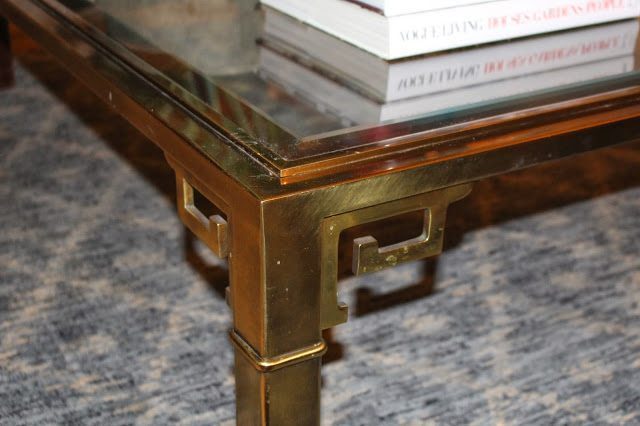 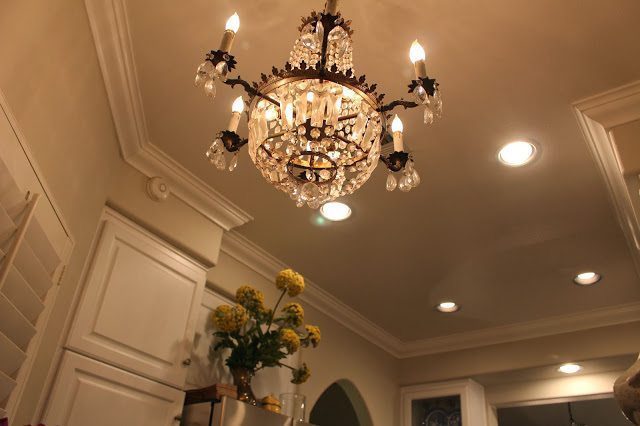 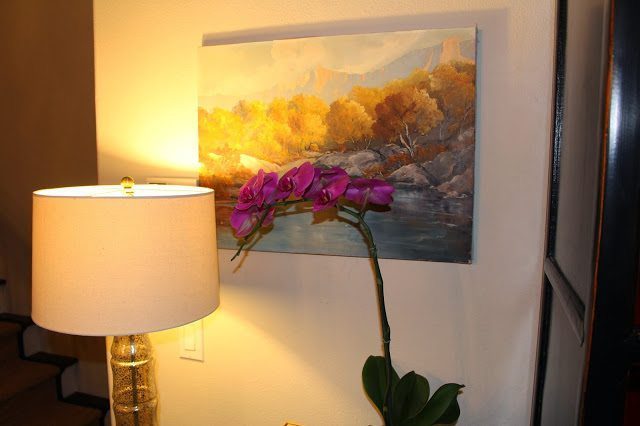 Sharon found this painting of California (one of a set of three) for $5 each. She purchased them from a girl who’s grandmother painted them. 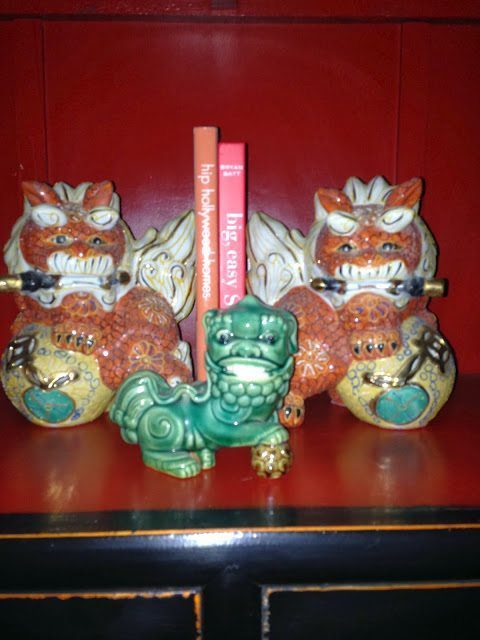 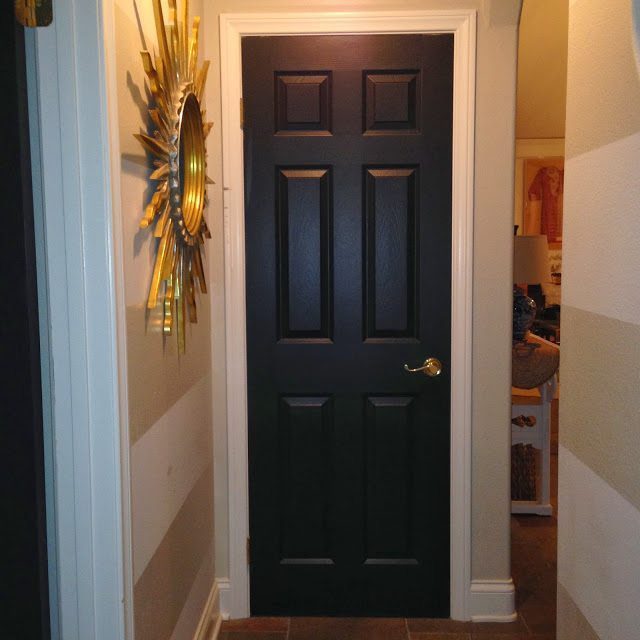 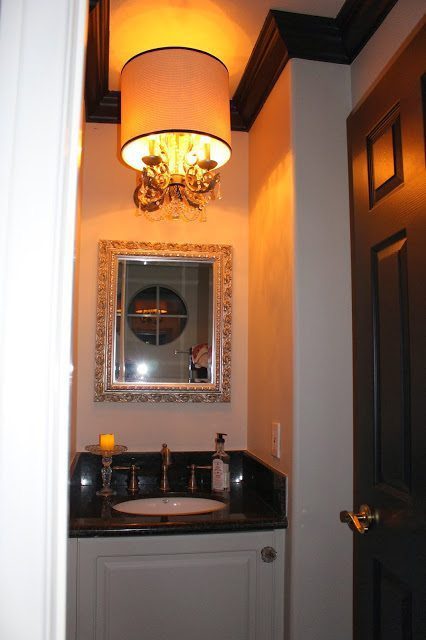 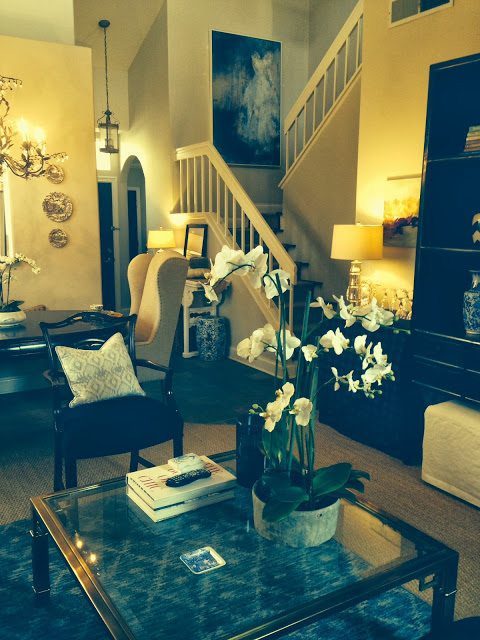 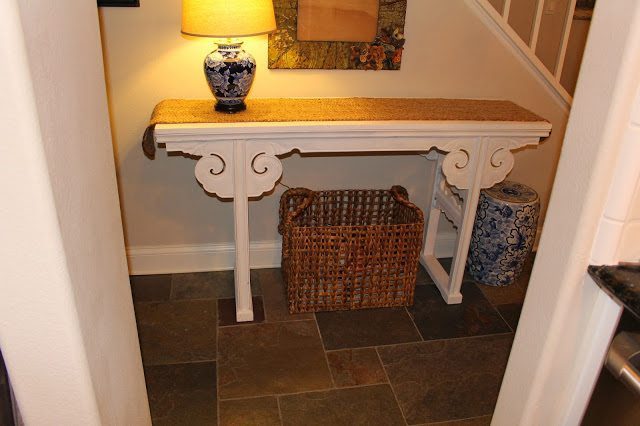 The pagoda console is a Pier One find Sharon painted white. Gorgeous! 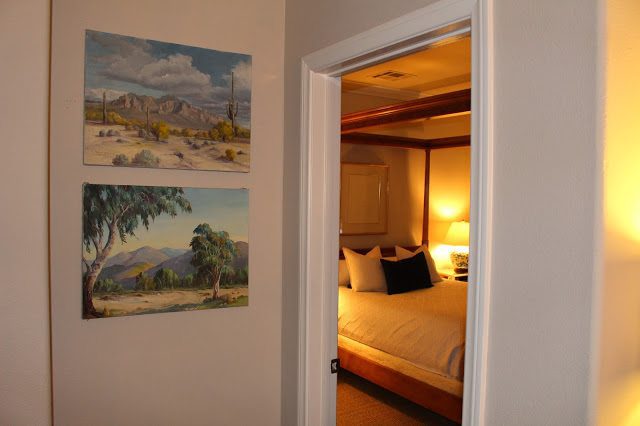 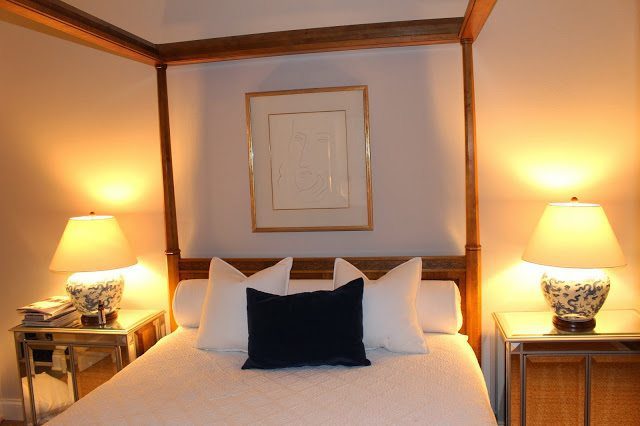 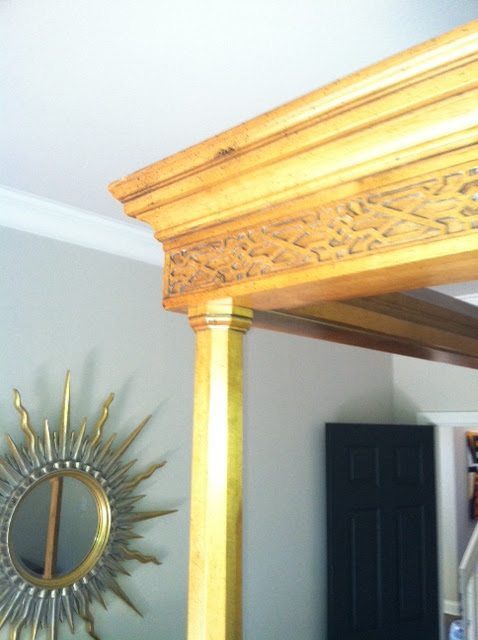 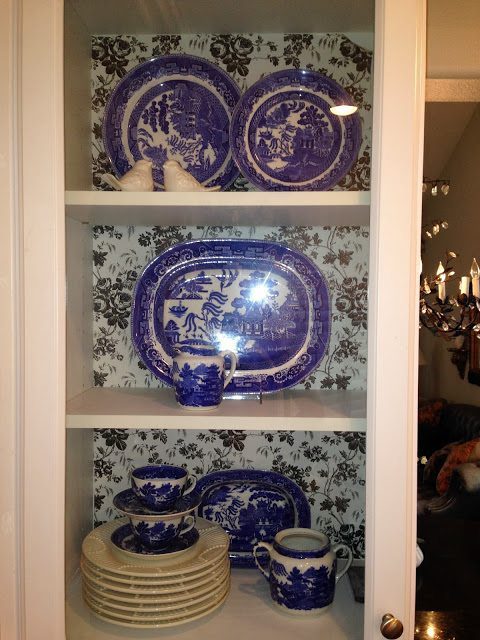 When asked about her blue and white collection, Sharon responded, “I didn’t realize that I collected Blue and White! In my mind I’m looking for Foo dogs, in pairs. If one is single I let him in to join the pack. I fell in love with the Blue Willow because of the story behind the scene, and the Greek key. Now that you mention it, I did purchase some very old Blue Willow on CL that I don’t use. Just look at….  I have a soft spot for dishes. Blogging has really opened my eyes, that I’m not alone. It’s strange what calls to us. I like really old transferware/ironstone. Three sets at Novara Way. So that’s how it started, Blue Willow.” 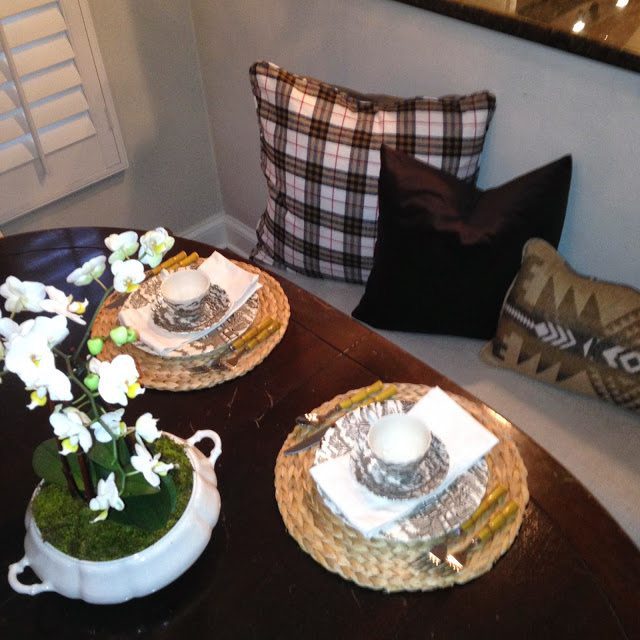 Sharon scored this set of brown transferware from Craigslist for $40. It is part of a service of 11 with eight dinner plates.

Raised in the San Fernando Valley, Sharon has moved extensively over the last 20 years due to her job as a designer for a production home builder. She has lived in Lake Tahoe, Dallas, Florence, Kentucky, Salt Lake City, and now back home via San Diego. “I have family here in Southern California, and it’s my home,” she said. “I left a job after 20 years and started an entirely new career. I moved to Oak Park to be closer to family.” In her spare time, she enjoys renovating and flipping homes. “It’s magical for me. Homes, and changing them, is what I like to do,” she said.

I think you’ll agree that Sharon is a pretty special lady, and an incredibly talented decorator! To learn more about Sharon and to follow her adventures, please head over to her blog Novara Way.

« Celebrating One Year of Blogging!
Decor to Reflect your Personal Style, by The Famous Home » 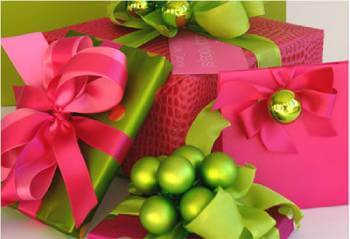