I adore the work of Miami-based artist Renato Armijo, particularly his “Glamadolls” series featuring the fun world of stylish girls and high fashion as seen through the eyes of an artist.   I was introduced to his work several years ago when he was featured in DailyCandy, and I have been a fan ever since.

Renato recently created a series of illustrations called “The Summer Girls” to celebrate the summers of the glamorous 1950s. While it may technically be fall, it is always summertime here in South Florida, and I love the retro glam vibe of this series! The Summer Girls journey back in time to iconic summer destinations, donning their cat eye sunglasses, fabulous hats, brightly colored swimsuits, and chic swim caps. Let’s soak up some summer sun with them! Images and captions are courtesy of Renato Armijo. 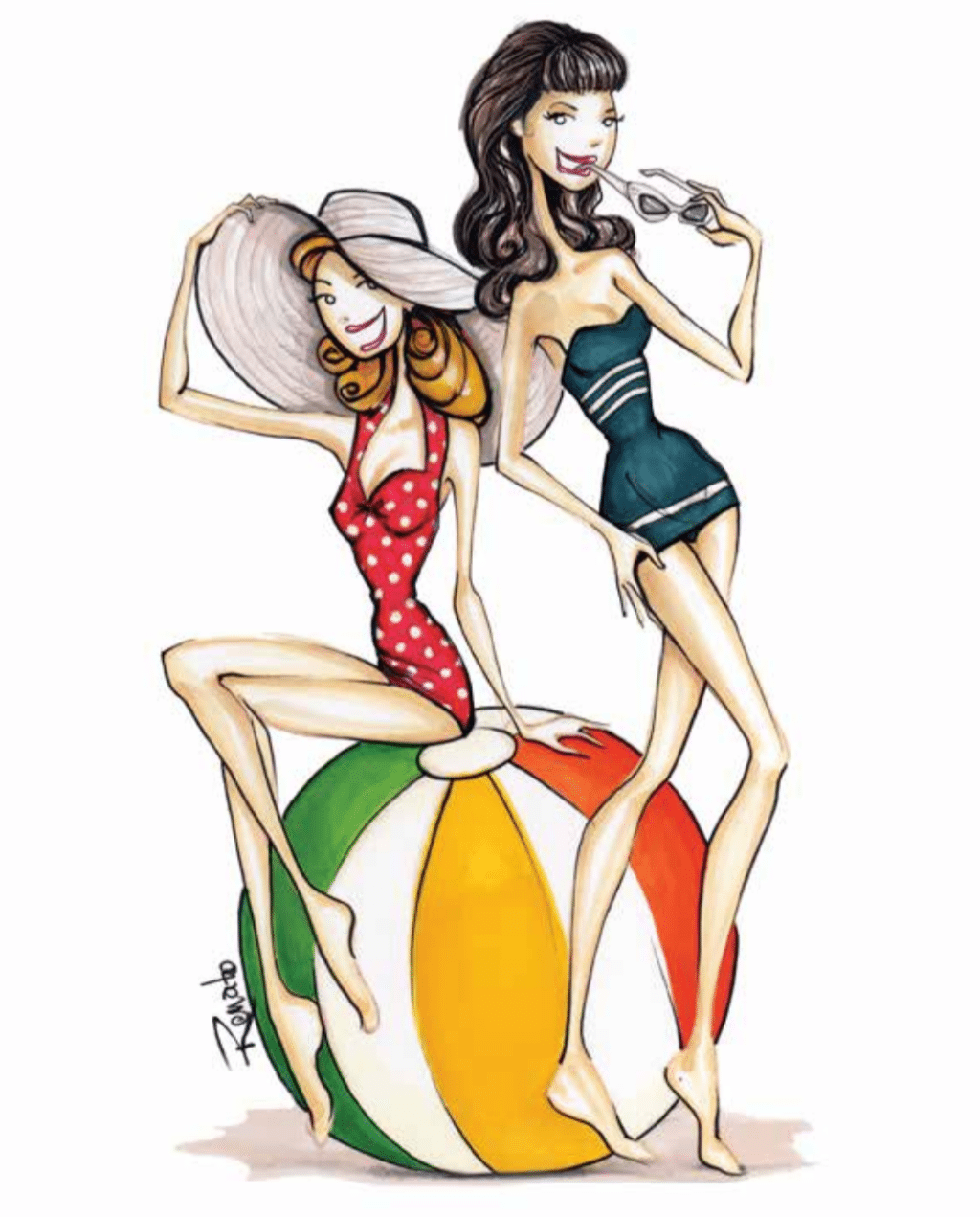 Magic City
A little magic in the sand… The sun is out. It’s Miami Beach 1959 and the first of our summer girls have arrived. Polka dots, cateyes, and a suitemat the Fontainebleau, everything needed for the quintessential summer holiday in the Magic City. 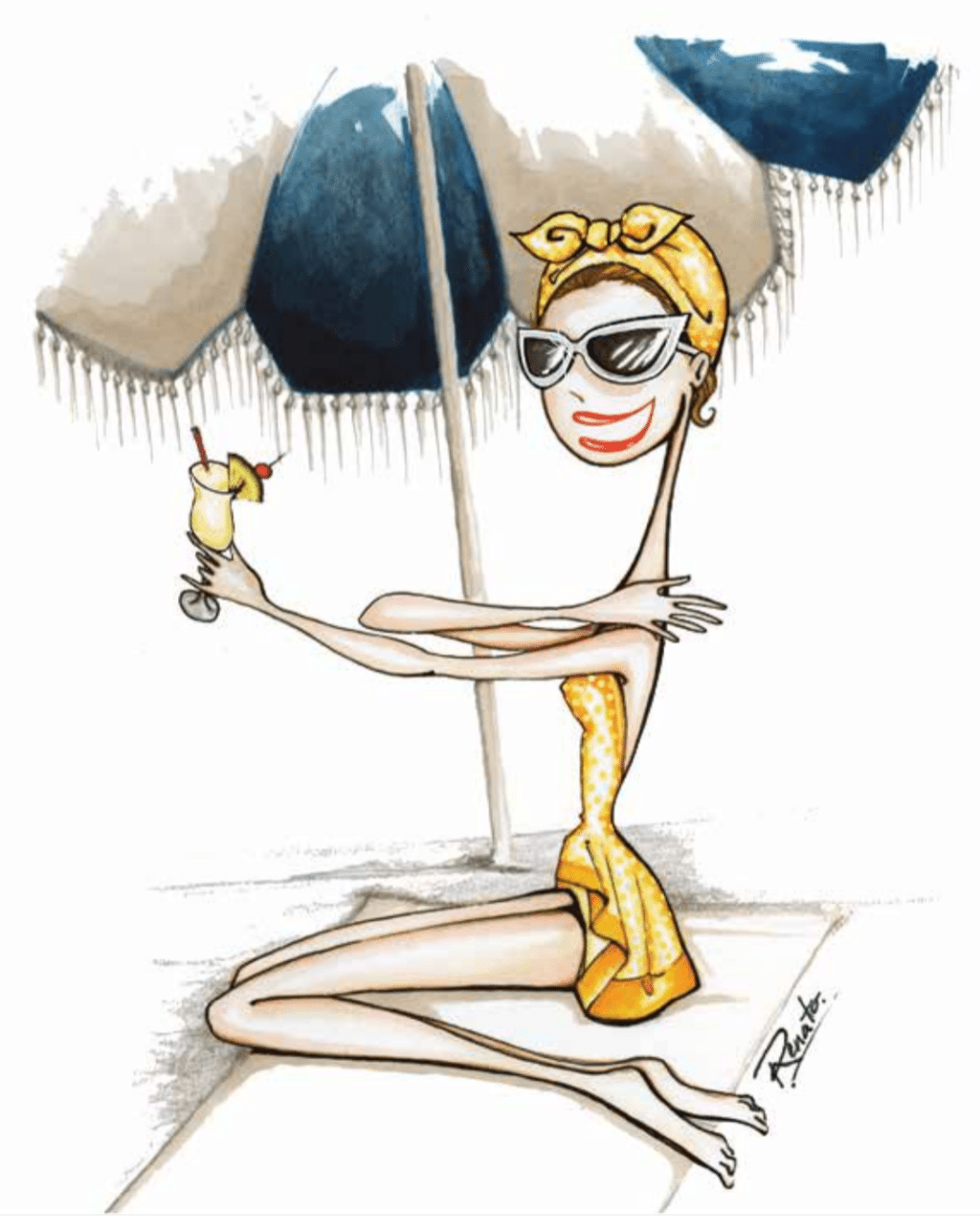 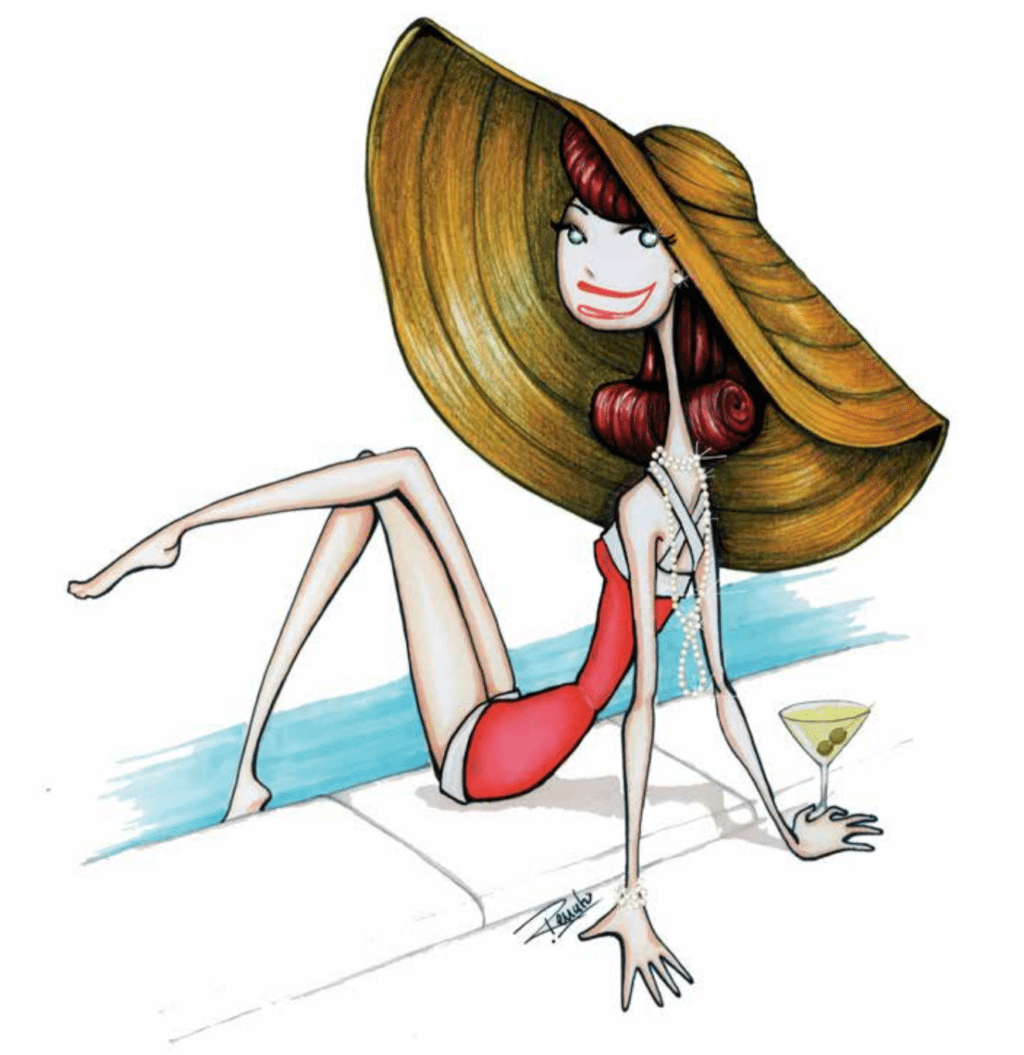 Beverly Hills
Summer with the stars… The sun is out. It’s Beverly Hills 1957 and the summer girls have checked IN at the IN spot. And you never knew, the girl under the giant, fabulous hat next to you could have been Sophia, Marilyn, or Liz. In other words, the IN crowd… All the girls wanted to dip toes and rub elbows at the Beverly Hills Hotel. To be IN. And have summer with the stars. 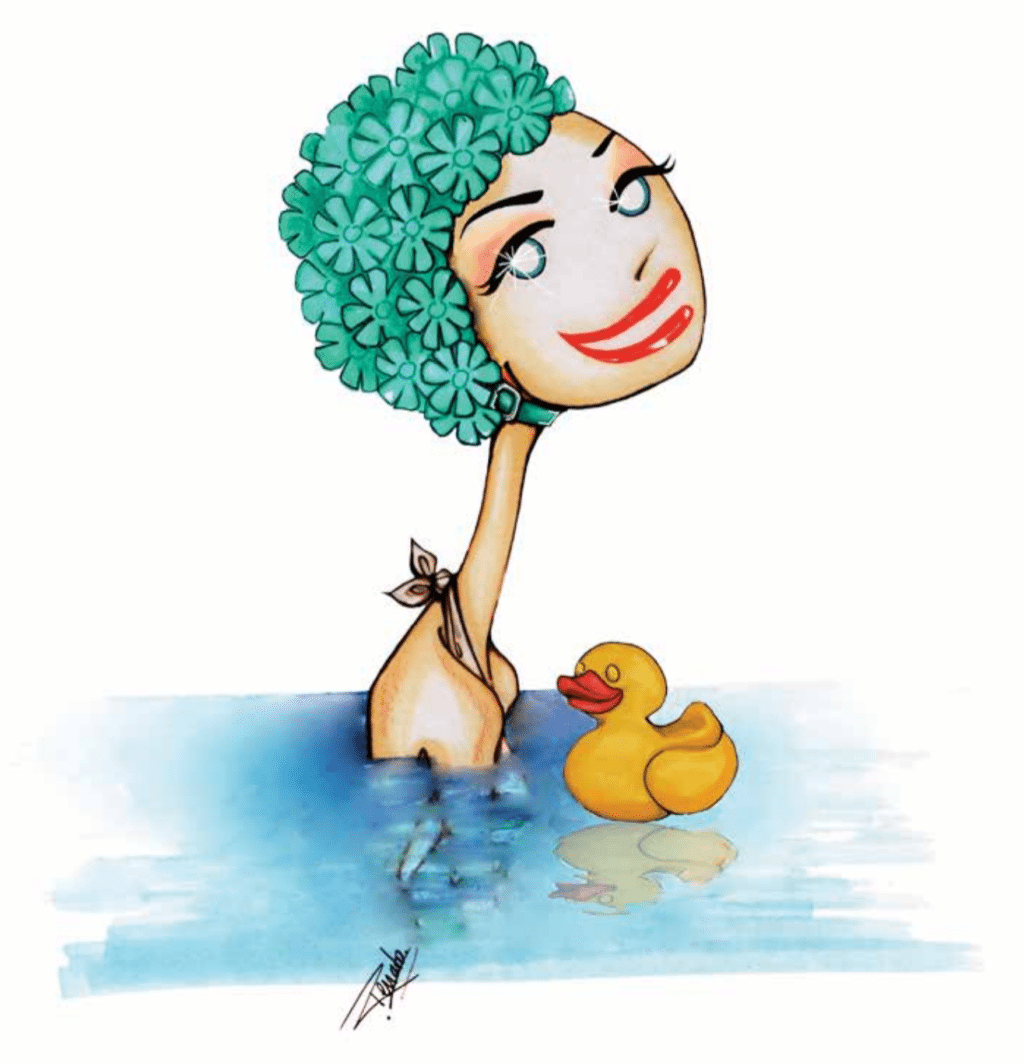 The Adirondacks
The fashionable place for summer… The sun is out. We’re high in the Adirondacks 1954 and the summer girls have arrived for the season. The city was hot and a cool summer camp in the mountains was the place to take in the breeze, wade in the water, and lounge by the lake… But of course the stylish girls all stopped off at Bergdorf’s for new sun dresses, swim hats, and bathing suits. Because even at the lake the other girls would be watching… After all, it was the fashionable place for summer. 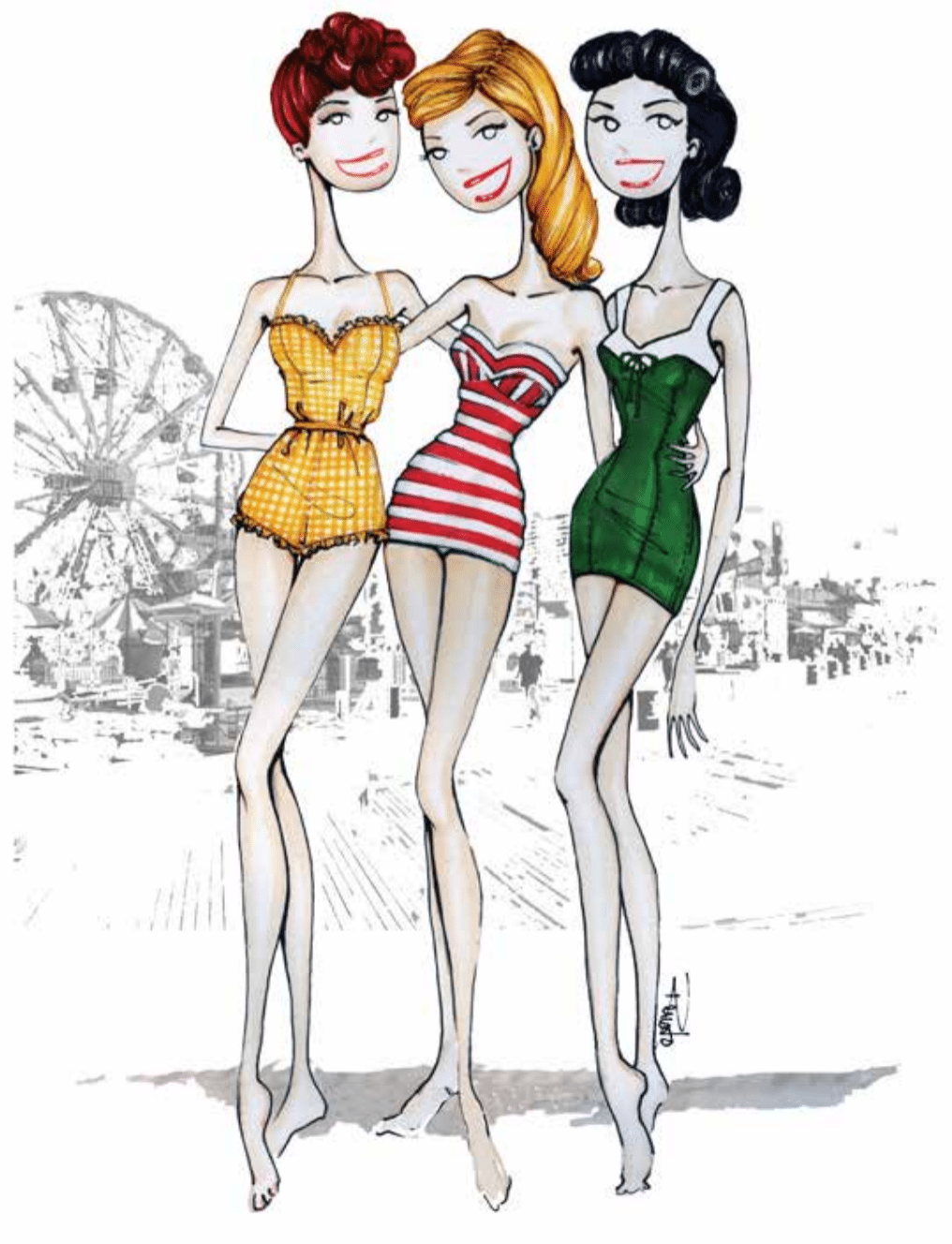 Coney Island
The ORIGINAL summer place… The sun is out. It’s Coney Island 1952 and the summer girls are here to enjoy the fun. No, it isn’t the Magic City nor yet the south of France. And you probably wouldn’t be sharing an umbrella with Veronica, Lana, or Jane… Still, there was the boardwalk and the Ferris wheel, hotdogs and cotton candy. And photo booths to take SELFIES! What else could you have wanted? It was a place for everyone where ANY girl could have a
little bit of the glamour of summer… So. Famous, iconic, classic – whatever you want to call it. It
was the ORIGINAL summer place.

Do you love Renato’s work as much as I do? His style reminds me of Ruben Toledo. You can see more through the Glamadoll Instagram, Facebook, Twitter, and Tumblr accounts. Email [email protected] to inquire about your very own custom Glamadoll! You can see the custom illustration he created for me on the “About Me” page of my blog.