Built in the 1890s, The Pillars was one of approximately a dozen grand homes built as the popularity of Hot Springs, Virginia peaked.  Guests such as Thomas Jefferson flocked to the Homestead Resort, which dates back to 1766. The Pillars, a three-story Greek Revival, was built on a hill overlooking the Homestead for the resort’s then-manager.


Over the years, The Pillars hosted notables such including Thomas Edison and President Grover Cleveland. But by the time the current owners – Bill and Susanne Pritchard of Houston – bought the house, it was in serious disarray. Mindful of the home’s rich history, they hired two professionals experienced in historic residences: interior designer Amelia Handegan of Charleston, South Carolina, and New York-based architect Allan Greenberg.


Photography by Max Kim-Bee and captions from Veranda magazine. 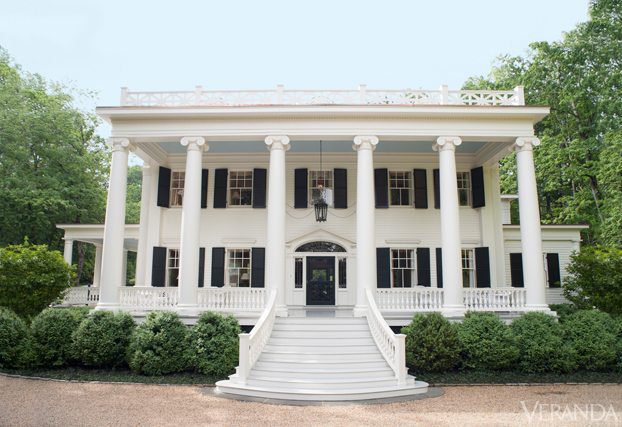 The two-year renovation was so extensive that the famous pillars had to be taken down, and the house was propped up by trees until they were replaced. A sweeping staircase was added, and the ceilings of the portico and side porch were painted sky blue, a 19th century detail. 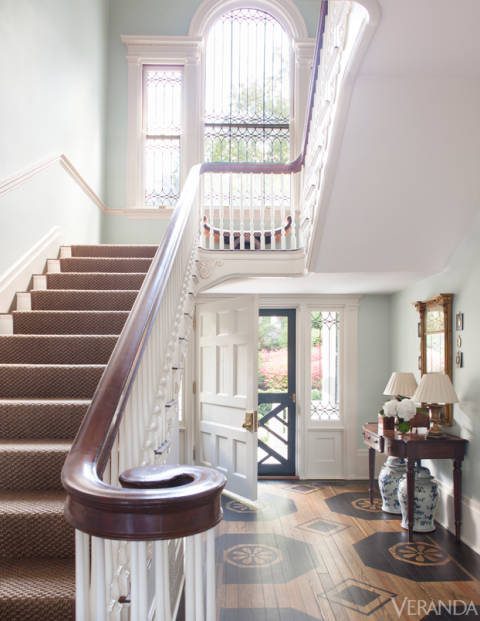 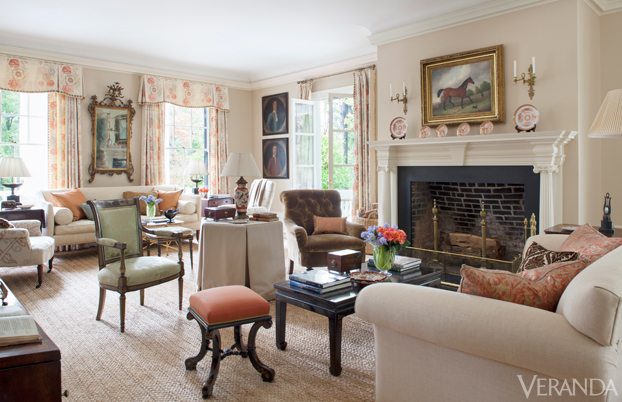 The faded coral of the Robert Kime linen curtains inspired the palette for the room. Custom sofas in Calvin Fabrics linen. Pillows in Fortuny cotton. Skirted table in Hodsoll McKenzie wool-sateen. Stool in Savel silk. Curtain trim, Lee Jofa. Abaca rug, Stark. Pair of portraits, Joseph Lovell.
Inside, mantels were refined and moldings given richer detailing. Handegan then created the thoughtfully elegant Southern rooms for which she is famous. “The end result was a layered look with no specific period in mind,” she says, noting the English, French, Swedish, and Dutch antiques she found to fill the spacious, 10-foot-high rooms. The Pritchards didn’t want the interiors to look overdone, so Handegan used light colors and little pattern, steering clear of heavy damasks in favor of cottons and linens. “If a house has strong, beautiful architectural details, I allow the palette and furnishings to take second place,” Handegan says. 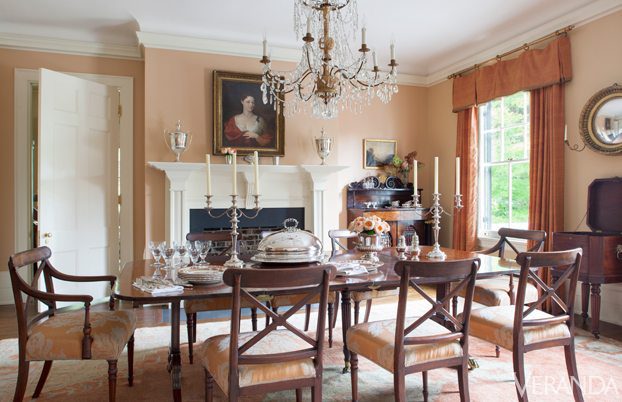 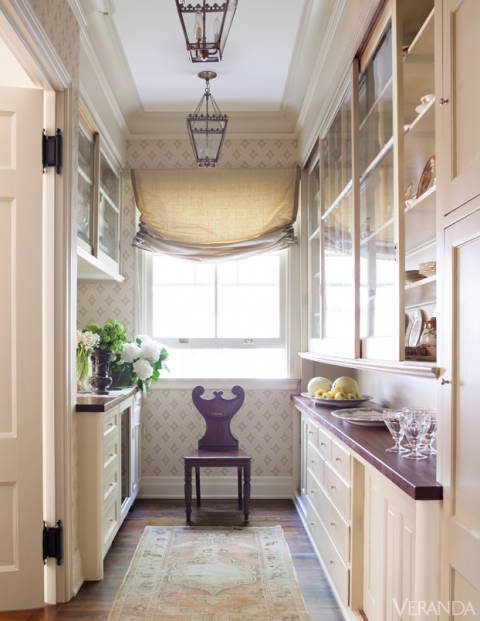 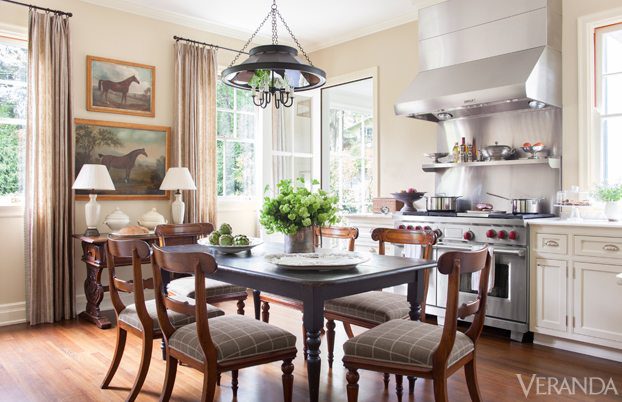 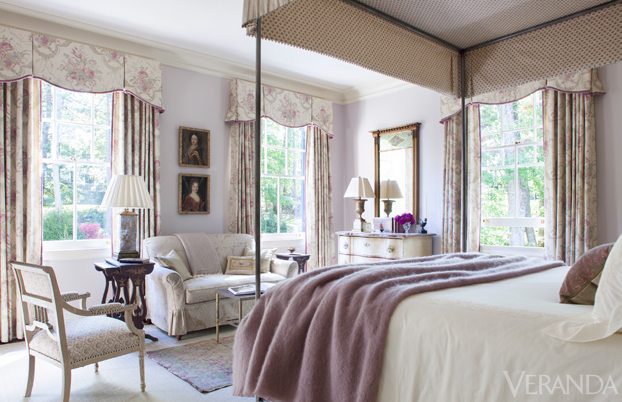 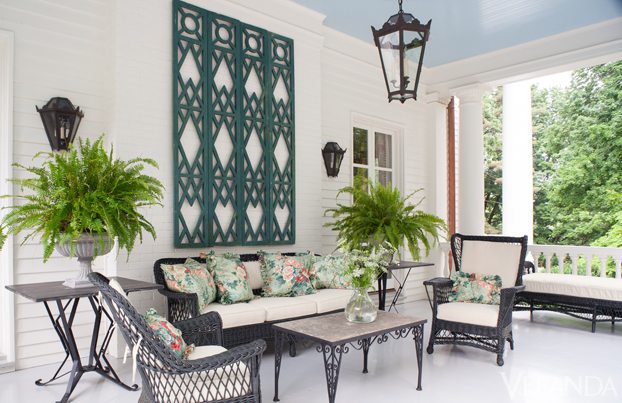 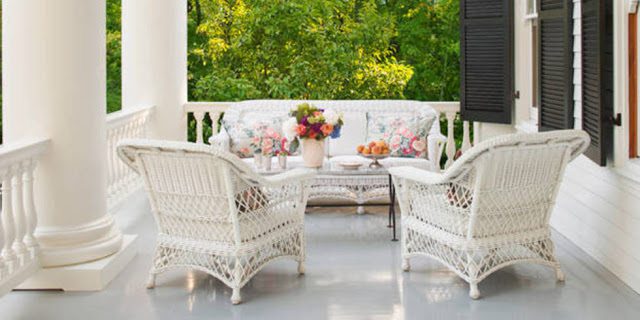 “Mrs. David Dunlop has arrived at The Pillars for the Summer and Fall… and is planning several garden parties and dances,” notes a 1910 New York Times society column, penned from Hot Springs, Virginia. The tobacco widow was among the Guggenheims and Van Rensselaers who came annually to this fashionable spa town to “take the cure” in the mineral springs. 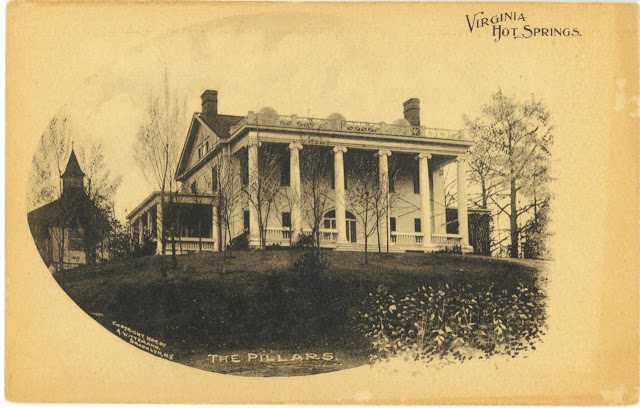 “The house was pretty beaten up,” says Greenberg. “It had not been maintained for a long time.” As can often be the case with old homes, one project dominoed into another: 100-year-old plumbing and wiring had to be ripped out and replaced, and the discovery of what had been a third-floor fire necessitated a new roof.

To read more, please visit Veranda magazine. And to see more of Amelia Handegan’s spectacular work, you will want to purchase a copy of her new book, Amelia Handegan Rooms.