Manhattan-based designer Alex Papachristidis never ceases to amaze me with his exquisite designs, and the classic shingled residence he shares with his extended family in Bridgehampton, New York is no exception. While it may appear imposing, it is actually quite the opposite says Papachristidis. “We live in more formal surroundings than most people do in the country. But really, we are superinformal people. We are always in our pajamas here. In New York we’re out so much. So for us to come here and not go out is a dream. Everyone comes to our place instead. We play tennis, we swim, we play cards all day.”  This article originally appeared in the November 2012 issue of Architectural Digest with photography by William Waldron and captions by David Colman. 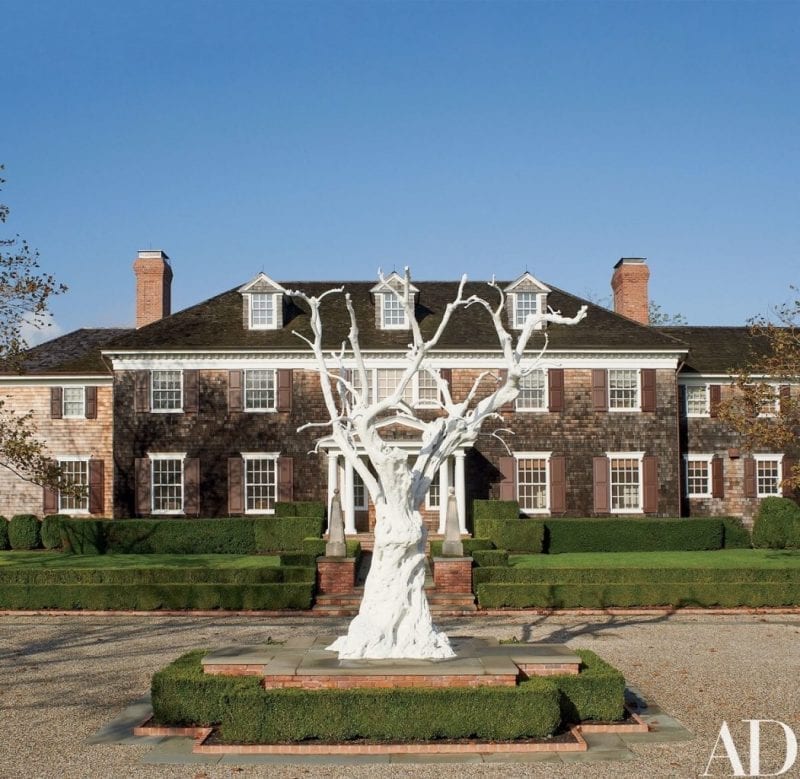 The formality of the house—with its traditional cedar shingles and Marvin windows—is offset by an Ugo Rondinone tree sculpture that dominates the front drive; Edmund Hollander designed the landscaping. 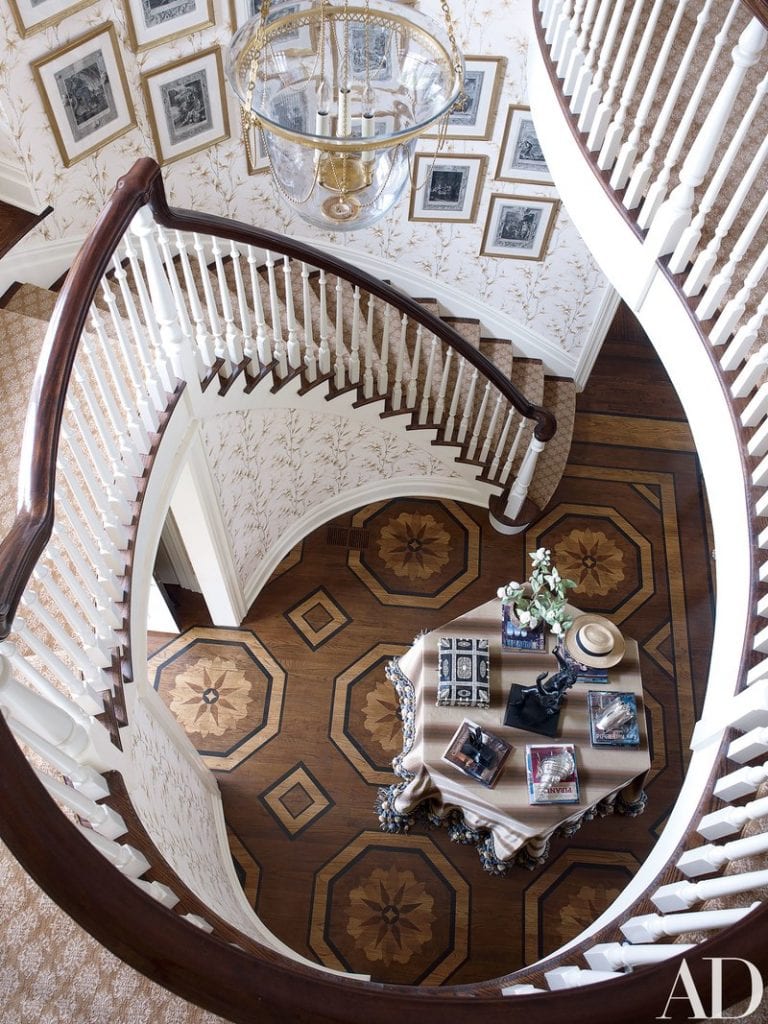 The entrance hall features a gilt lantern from Marvin Alexander and hand-stenciled flooring by Optical Grays; the walls are lined with Rose Tarlow Melrose House wallpaper. 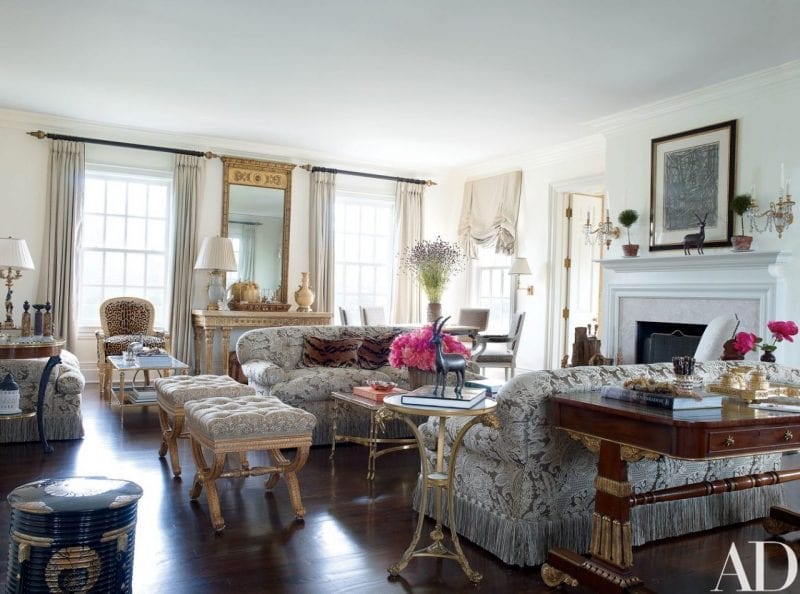 In the living room, painted in Benjamin Moore’s Linen White, 19th-century gilded stools are placed next to sofas upholstered in a Clarence House fabric, with pillows of a silk velvet from Le Décor Français; a Charles Arnoldi ink drawing surmounts the fireplace, and the curtains are of a Larsen fabric from Cowtan & Tout. 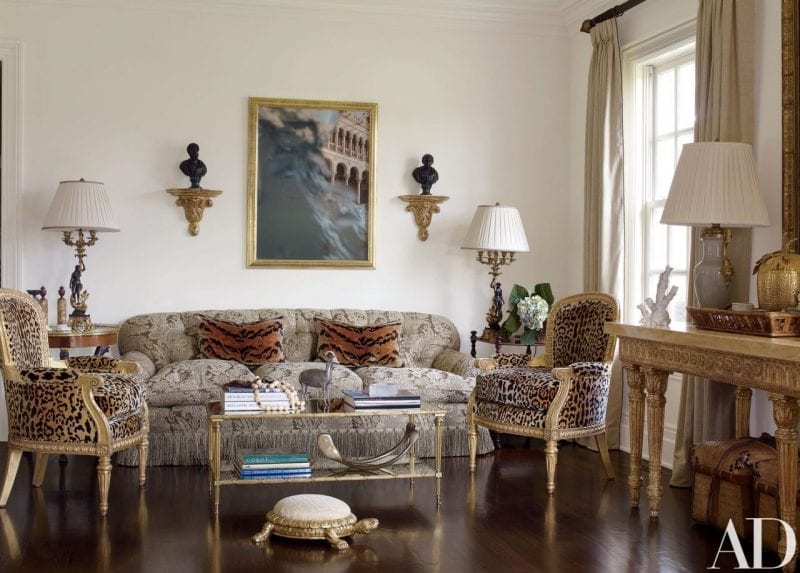 A living room wall displays two Roman bronze busts from Kentshire and a Mona Kuhn photograph of Venice; the leopard-print silk velvet on the armchairs is by Brunschwig & Fils. 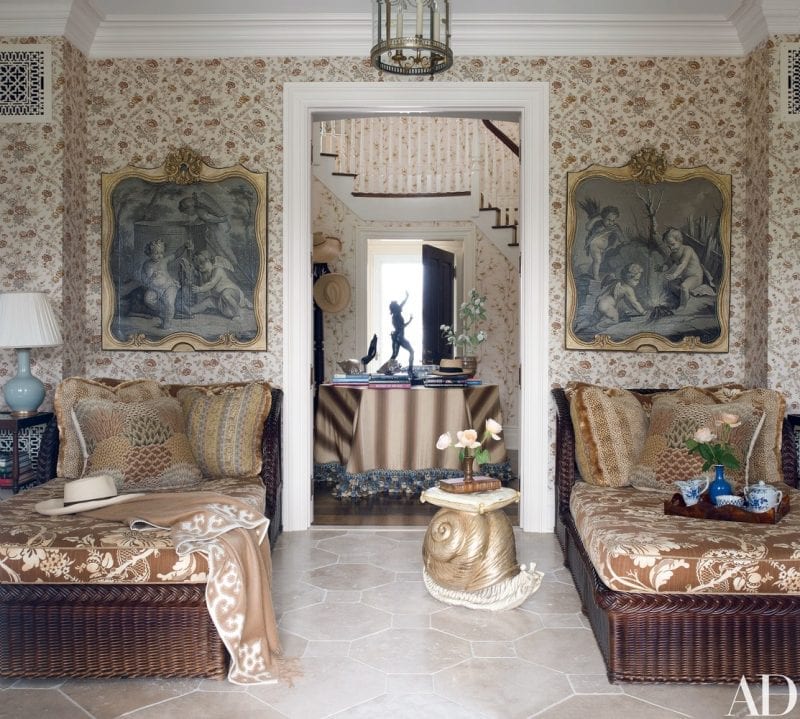 The loggia’s Cowtan & Tout wall covering serves as a backdrop for two 18th-century grisaille paintings, each hanging above a Bielecky Brothers wicker daybed with cushions of a Clarence House fabric. 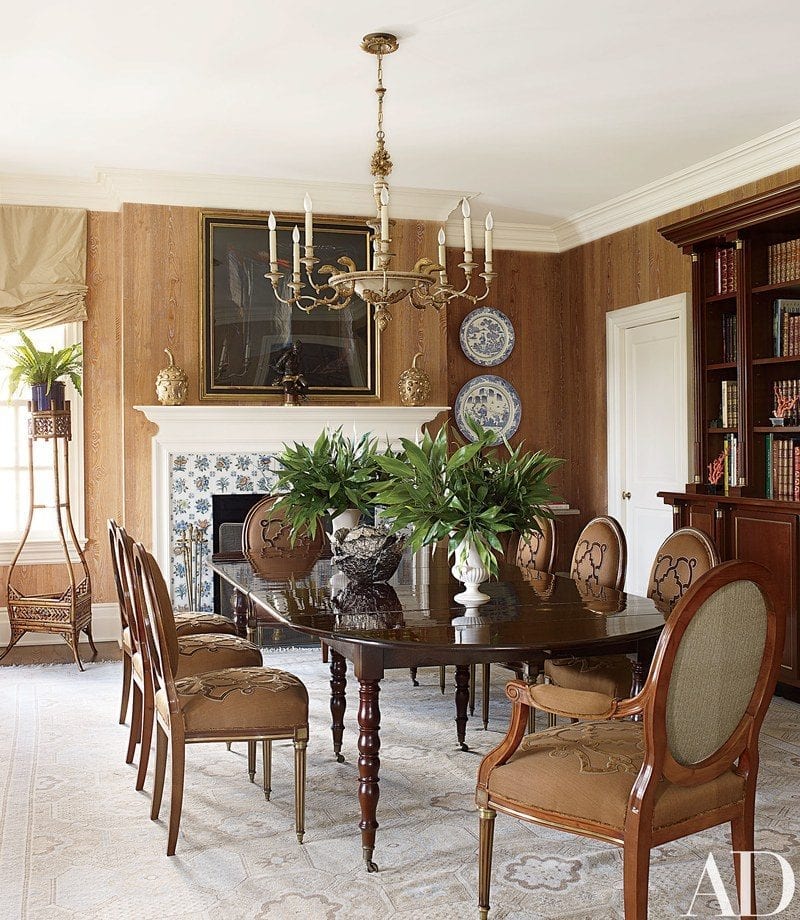 A Prussian chandelier is suspended above the dining room’s 19th-century French table from R. Louis Bofferding; the chairs are from Philippe Farley Antiques, the walls are sheathed in a Nobilis faux-bois paper, and the rug is by Stark. 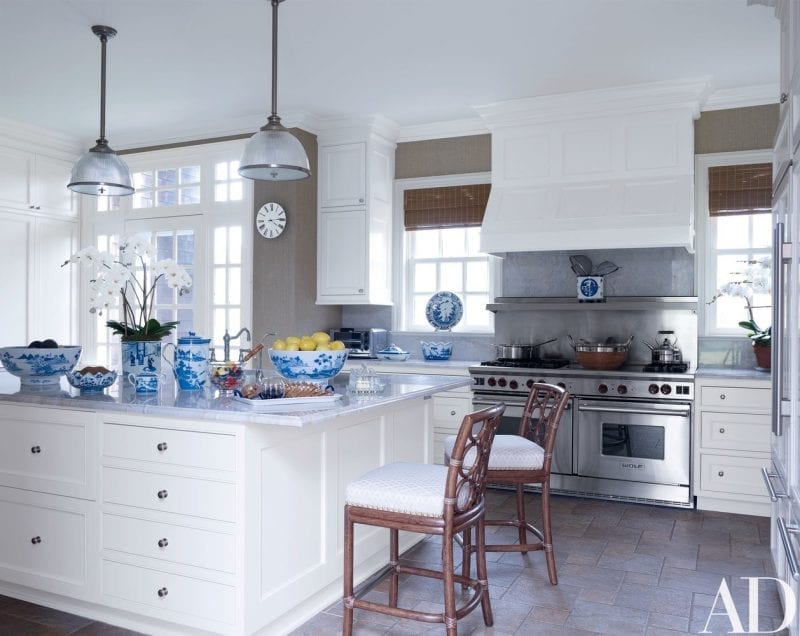 The kitchen stools are by Laura Kirar for McGuire, and the blue-and-white china is by Mottahedeh; the range is by Wolf. 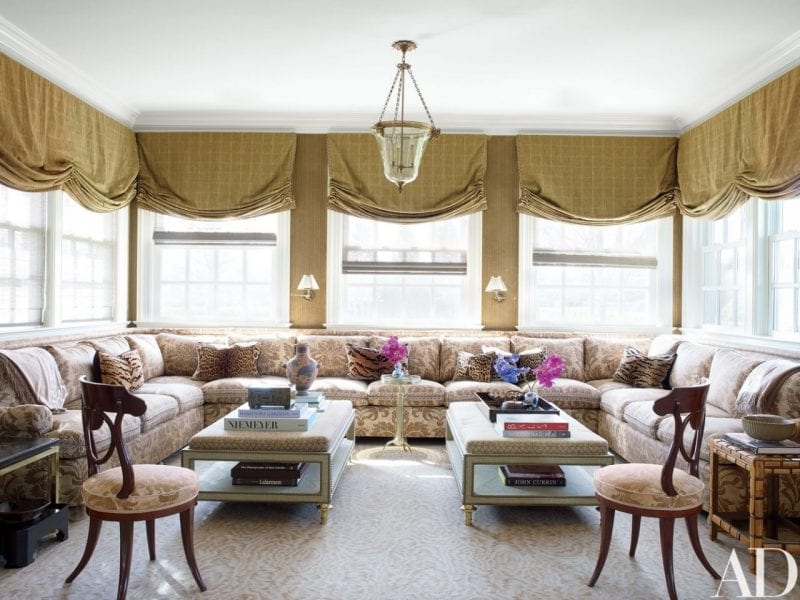 In the family room, the sectional sofa, clad in a Fortuny fabric, frames a pair of Papachristidis-designed tables; a Colefax and Fowler fabric from Cowtan & Tout was used for the window shades, and the rug is from Beauvais Carpets. 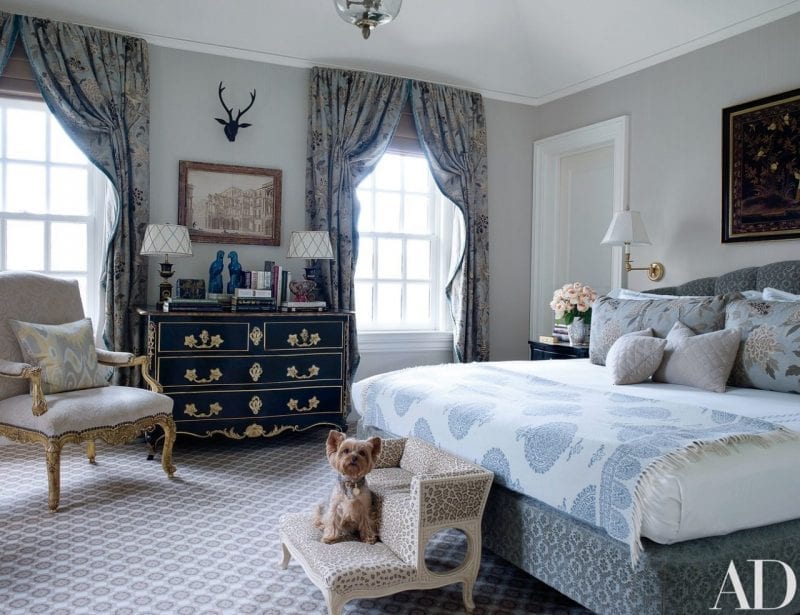 Teddy, a Yorkshire terrier, perches on leopard-spot bed steps in Papachristidis’s room; the commode is 18th-century French, the throw is by Anichini, and the carpeting is by David Easton for Beauvais. 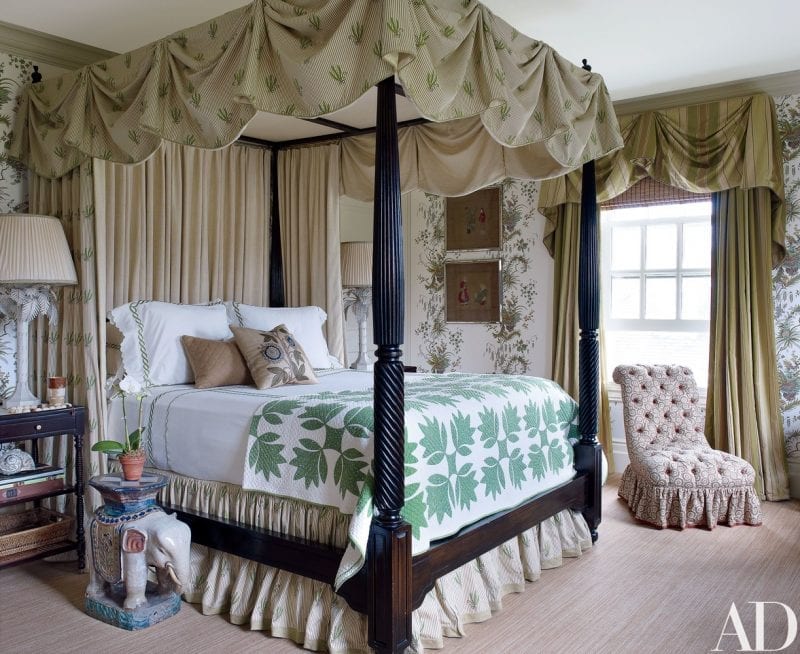 In a guest room, the antique quilt and Clarence House–fabric canopy on the British Khaki Collection bed by Robert Lighton share a leafy motif; the carpeting is from Beauvais. 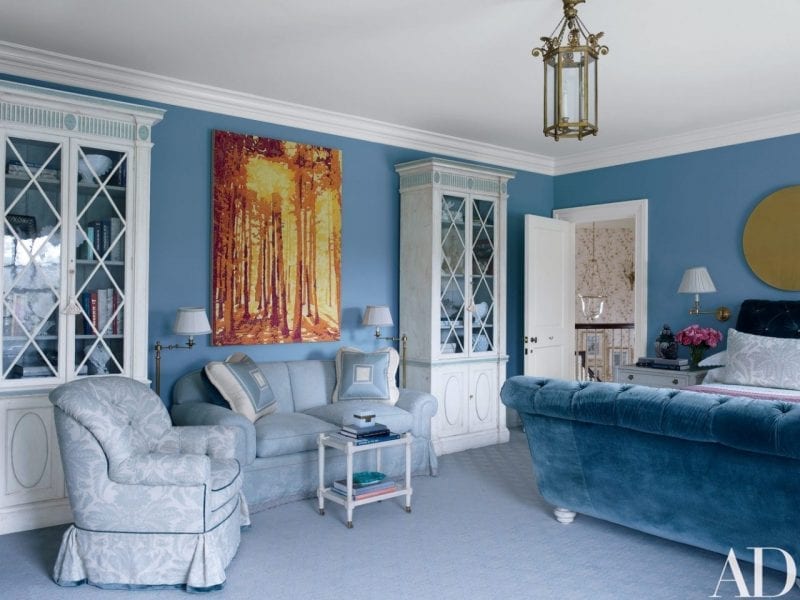 Walls painted in Benjamin Moore’s Pleasant Valley contrast with an Adam Ball canvas in the master bedroom; the cabinets are 18th century, and the bed is upholstered in a Brunschwig & Fils silk velvet. 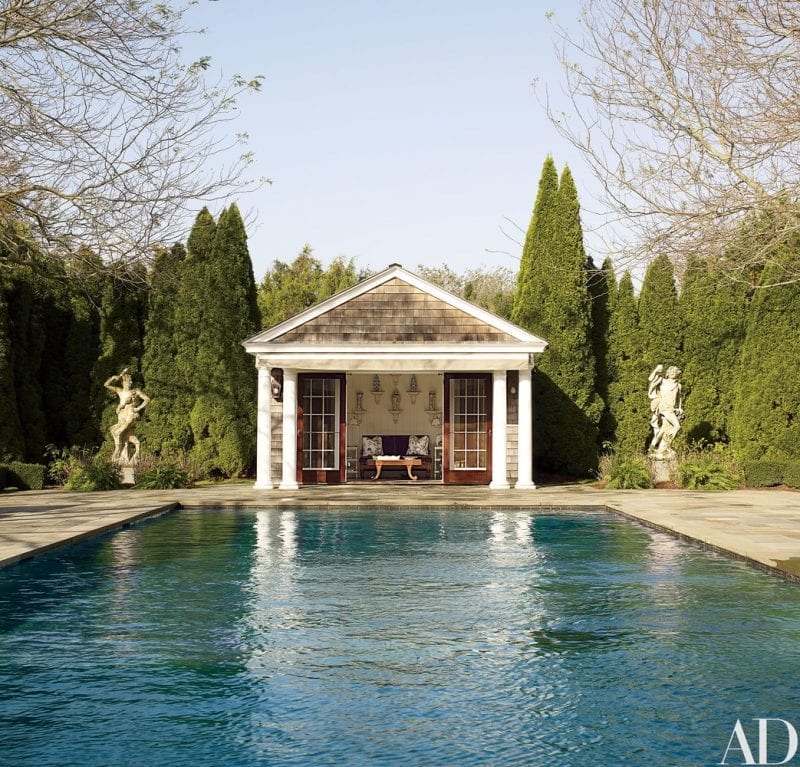 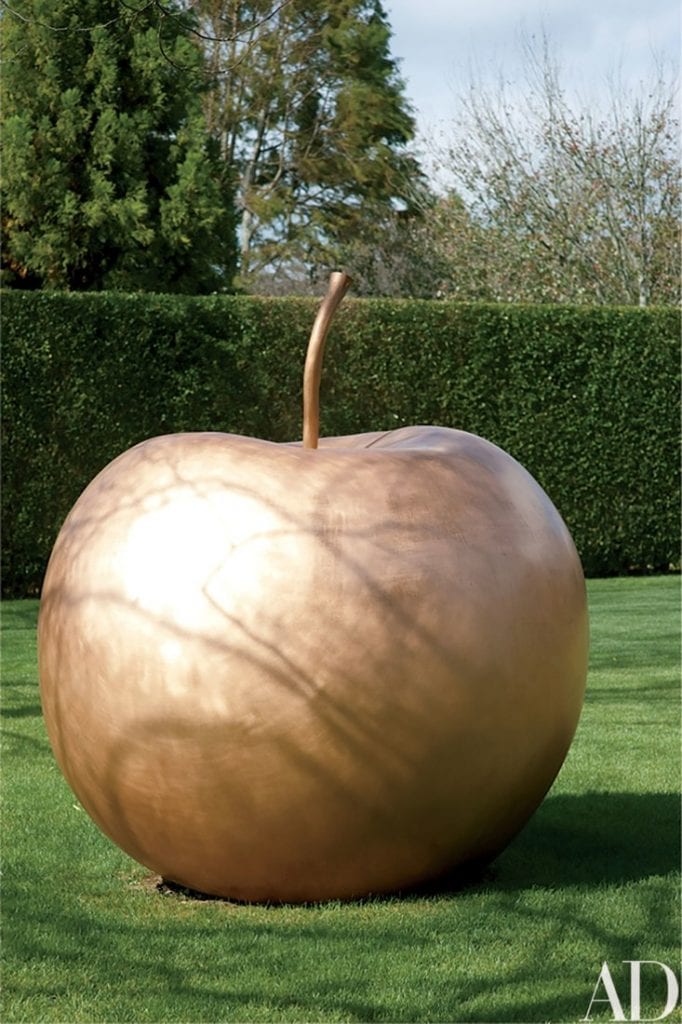 Absolutely stunning! For additional information, please visit Architectural Digest. I also recommend the book The Age of Elegance: Interiors by Alex Papachristidis. Ongoing inspiration can be found @alexsviewpoint on Instagram.