With the passing of former first lady Nancy Reagan earlier this month, I thought it would be fitting to acknowledge the superb taste she legendarily displayed through her design of the White House in 1981. Like Jacqueline Kennedy, who orchestrated a complete restoration of the White House two decades prior, Nancy cared passionately about history and helped restore the residence to its former glory.

Nancy wanted to create a warm and gracious home, where she and President Reagan could live contently surrounded by their furniture and personal possessions brought from their California house. To create this atmosphere, she worked with her friend and noted designer Ted Graber, a disciple of Billy Haines. Nancy was involved in every aspect of the Reagan White House design. Said Graber, “She was responsible for its same elegance and easy charm she herself epitomizes.” Images and captions below from Architectural Digest… 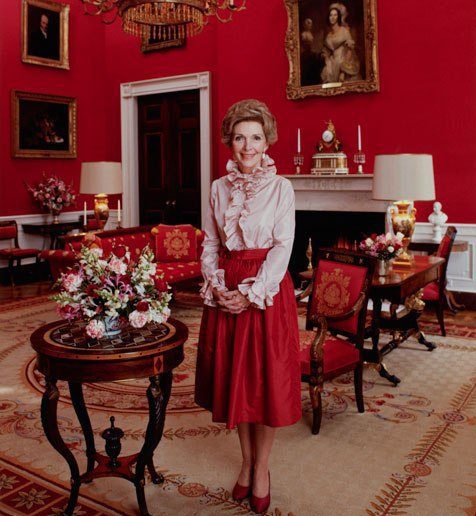 At the start of Ronald Reagan’s first term, the former First Lady (above, in the Red Room in 1984) enlisted the help of designer Ted Graber to update the private White House rooms (see Architectural Digest, December 1981). “This house belongs to all Americans,” she once said. 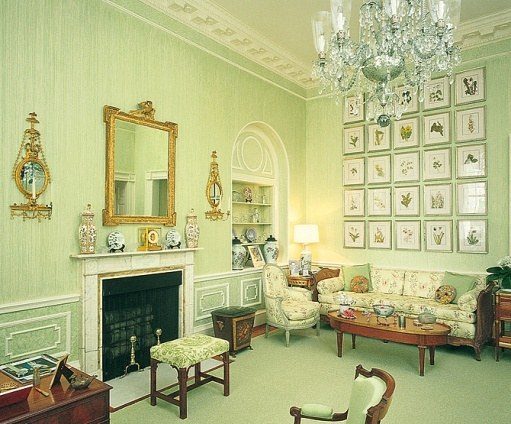 For her office, Nancy Reagan favored retaining existing White House furniture, which she had refurbished. Only the mirror over the fireplace and the 18th-century day-bed were acquired for the room. The wildflower prints were reproduced from 1925 botanical watercolors. 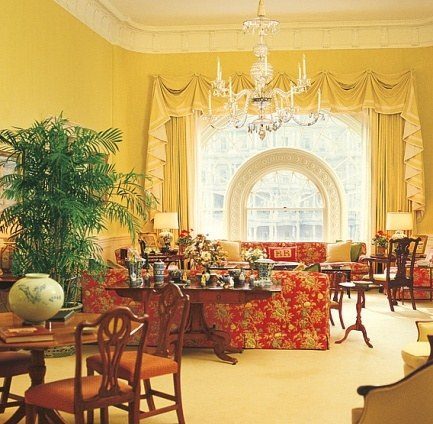 The Reagans brought the comforts of home to the White House: Furnishings from their California residence were incorporated into the West Sitting Hall, which the president and First Lady used as a living room. Nancy Reagan added her own small decorative objects. 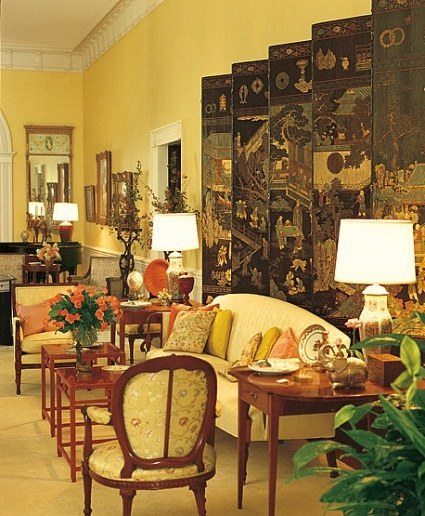 A 17th-century coromandel screen decorated the antiques-filled Central Hall. For this and other areas, Nancy Reagan personally culled stored furniture that had been used by previous first families—”beautiful pieces that were deteriorating and needed to be restored,” she noted. 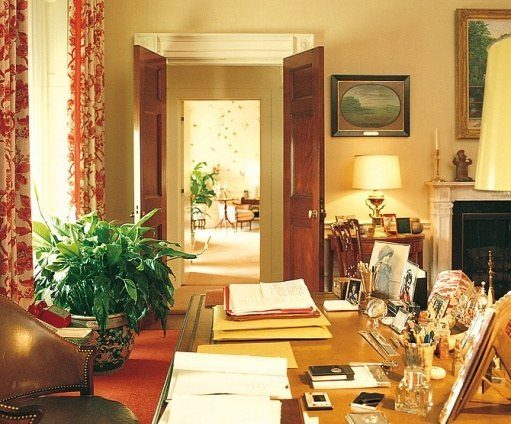 Just off the First Family Bedroom was President Reagan’s private study, which he used on evenings and weekends. It contained his own possessions, such as the mahogany partners desk and the pre-Columbian sculpture on the mantel. The small painting is by George Catlin. 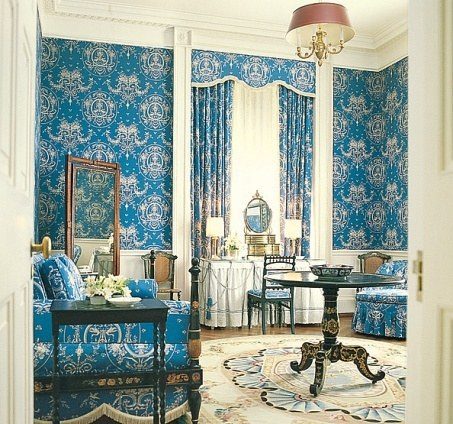 The Queens’ Sitting Room was left virtually untouched from when it had been revamped under Jacqueline Kennedy, who approved the blue-and-white fabric for the walls, draperies, valance and furniture. The 19th-century Aubusson rug was placed in the room in 1971. 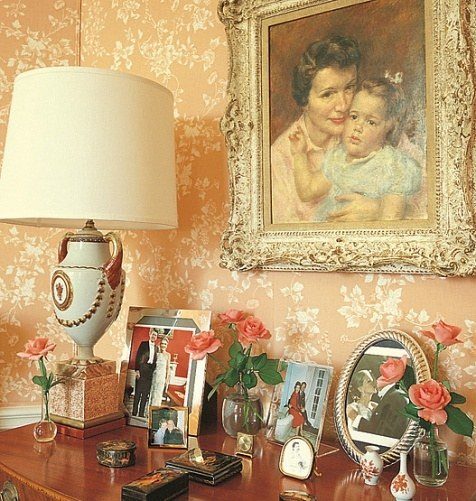 A Paul Clemens portrait of Nancy and her daughter, Patti, hung in the First Lady’s Dressing Room. 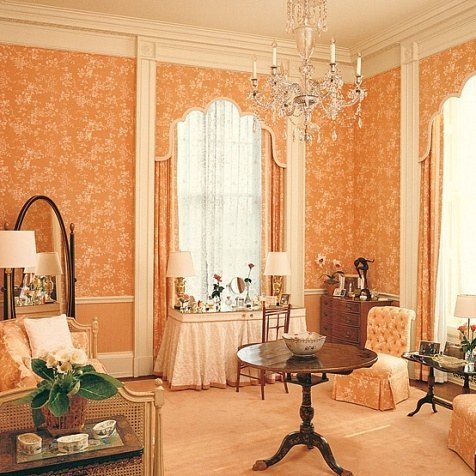 A floral fabric was chosen for the room’s walls. 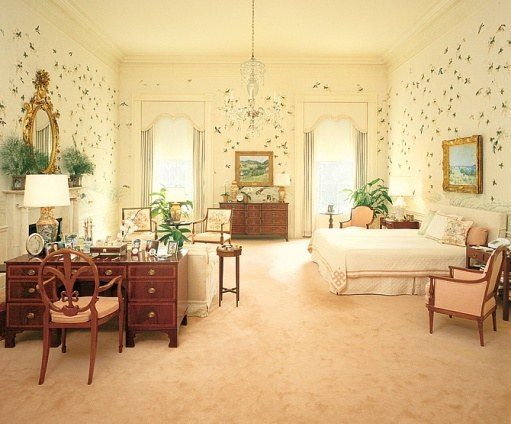 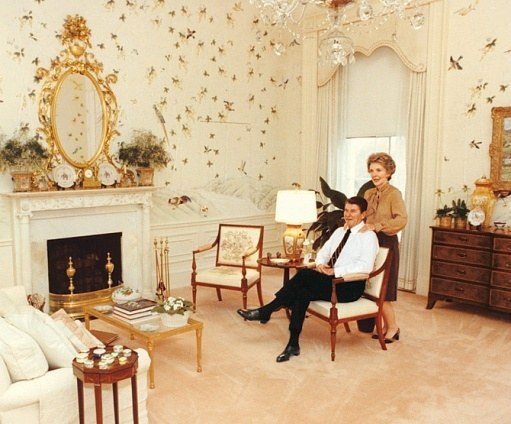 The Reagans enjoy a quiet moment in their bedroom. About the completed interiors, the First Lady said, “Each room, when I look at it, seems to be my favorite.” Nancy displays her collection of Battersea boxes on the side table.

Nancy Reagan’s White House decor has always been my favorite, with Jacqueline Kennedy’s coming in as a very close second.  Both exemplify the fact that classic, traditional decor stands the test of time. These images look as fresh today as they did 35 years ago, and I am thrilled that old school is back in vogue. To read more about the White House renovations of Nancy and Jacqueline, please visit Architectural Digest. 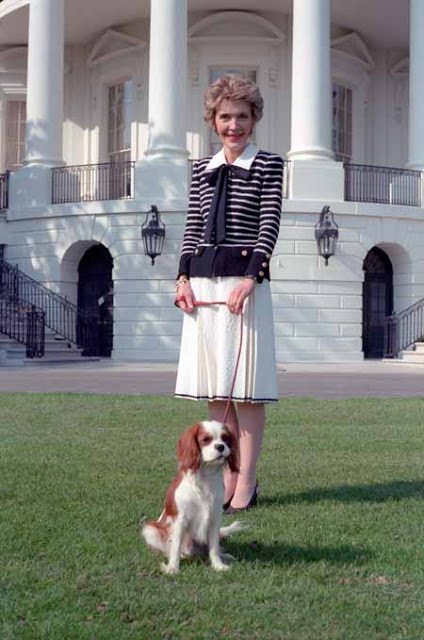