Founded in 1797 by Jean Zuber, each Zuber & Cie wallpaper panel is still produced entirely by hand using the original hand-carved woodblocks. Headquartered in Rixheim, France, Zuber received the Legion of Honor by King Louis Philippe in 1834, and the company continues to be celebrated today for its treasured works of art. Zuber has approximately 20 large scale panoramic murals in its collection, and since tomorrow is Independence Day, I decided to review “The War of American Independence” and “Views of North America” panoramics. 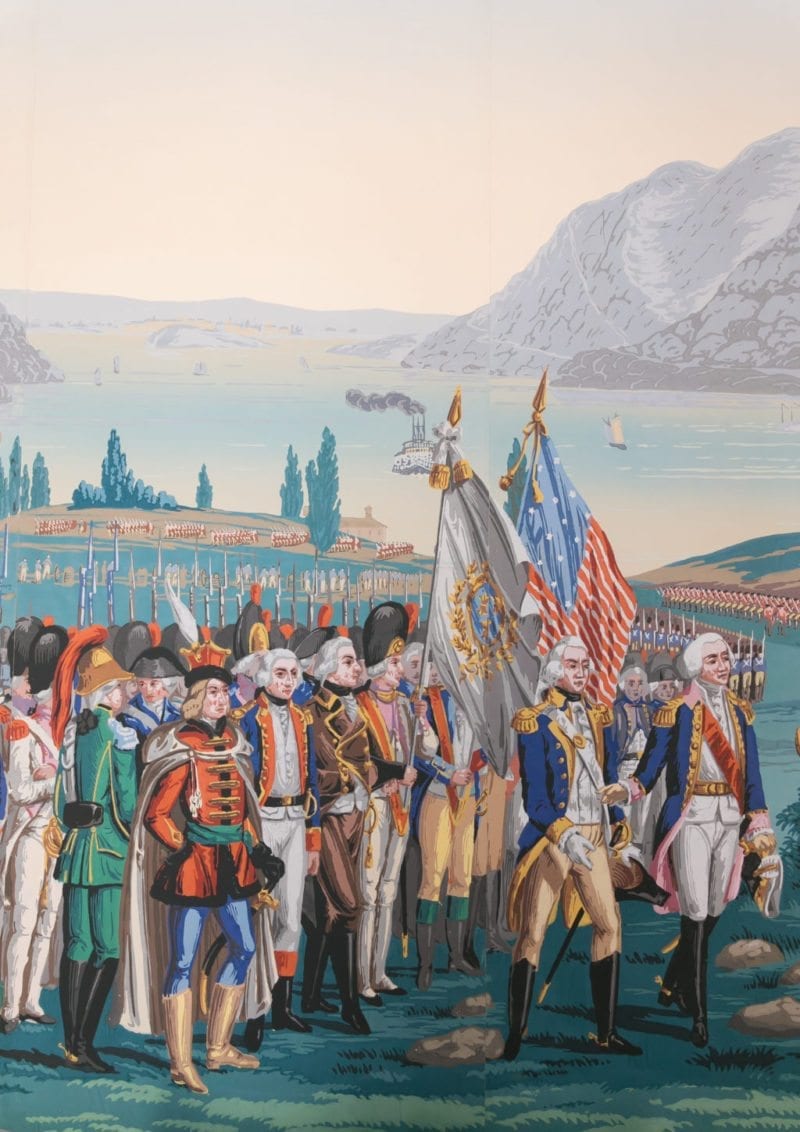 The War of American Independence by Zuber in Patricia Altschul’s home. Image via Charleston Home + Design.

Vues d’Amérique du Nord or Views of North America was first produced in 1834. This panoramic contains 32 panels and depicts American landscapes that were particularly admired by Europeans: the Natural Bridge of Virginia, Niagara Falls, New York Bay, West Point, and Boston Harbor. To create this series of panels, 1,690 woodblocks and 223 colors are used.

In 1852, Jean Zuber republished Views of North America as La Guerre de l’indépendance Américaine or The War of American Independence. He substituted foreground figures so the Boston Harbor became the Boston Tea Party, and peaceful scenes became battlefields. Today, it is still printed on the 2,300 boards carved in 1852 using 360 colors.

During her celebrated restoration of the White House, First Lady Jacqueline Kennedy salvaged Views of North America panels from a Maryland home that was being demolished. To this day, the panels remain on the west side of the Diplomatic Reception Room of the White House. 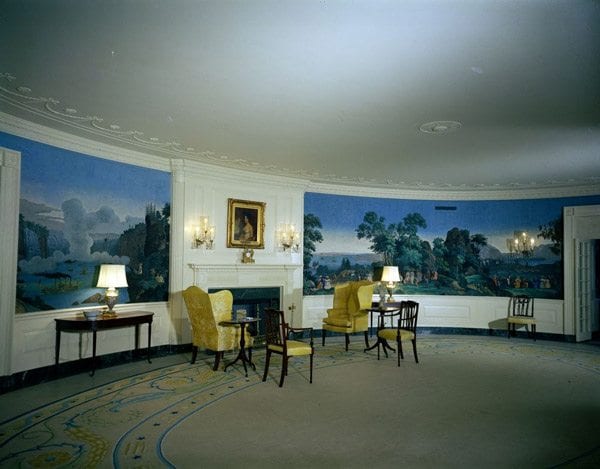 The Diplomatic Reception Room in 1961, via The White House Museum

According to France Today, “Zuber possesses over 150,000 hand-carved woodblocks, which were made between 1797 and 1830, when the company employed 50 in-house woodcarvers, and each is classified as a national treasure. Once a block is worn out it is retired, along with its design, as the materials and expertise needed to recreate it is prohibitively expensive.

Next, it takes four people a month to hand brush a base dégradé surface – the rich graduated color background characteristic of a Zuber mural. After that, it’s a balletic rhythm of building layer upon layer of overlapping designs and colors – about 2,030 unique paint formulas, to be exact – from formulas which are as old as the woodblocks. Eight months later, the panorama – an edition of 50 murals made up of three to five scenes, each comprising six to eight panels, meaning all told there are anywhere from 18 to 40 panels – is ready for delivery,” source. 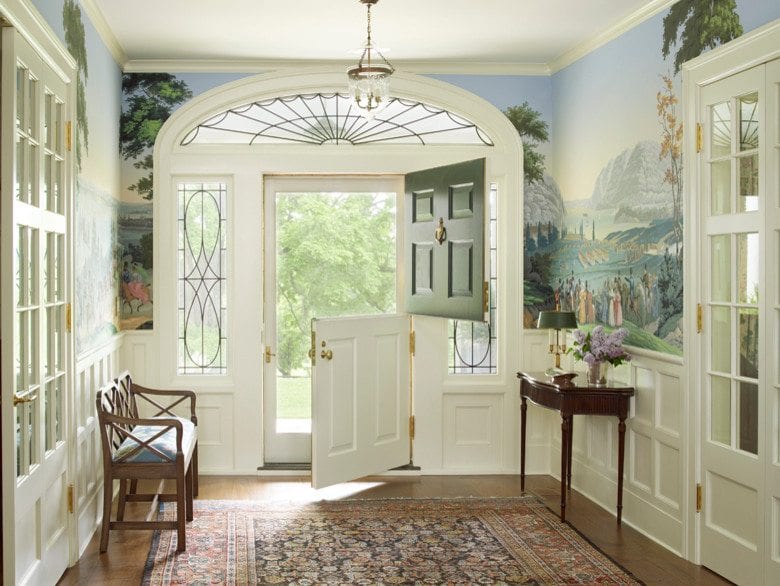 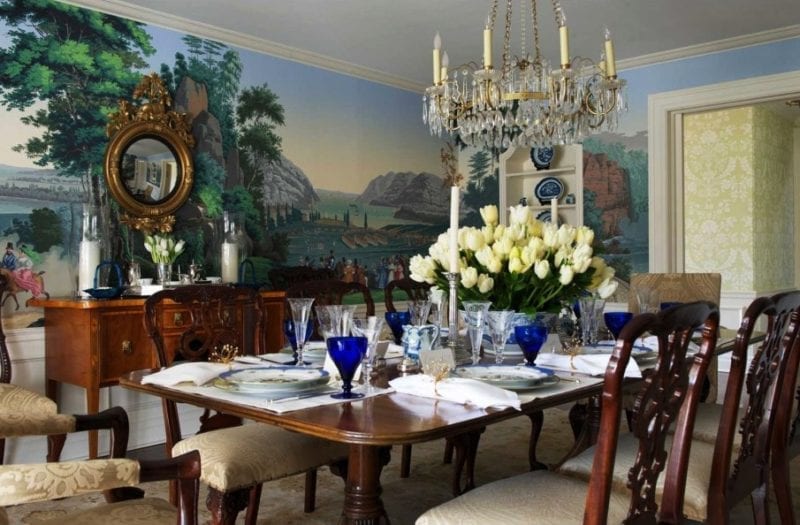 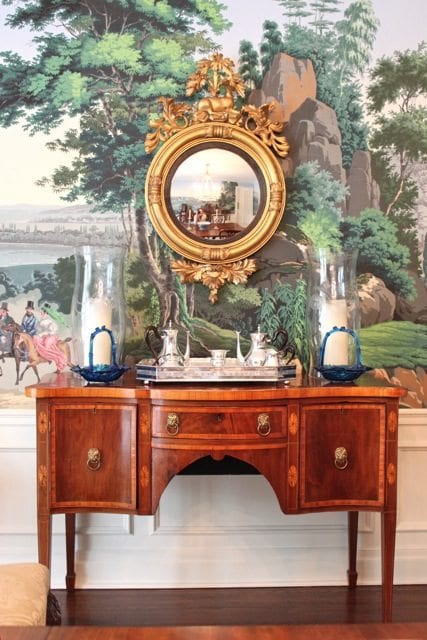 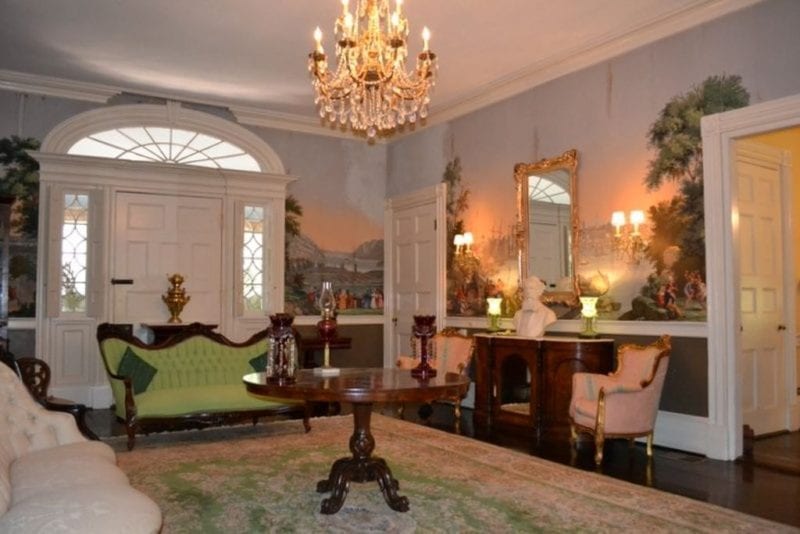 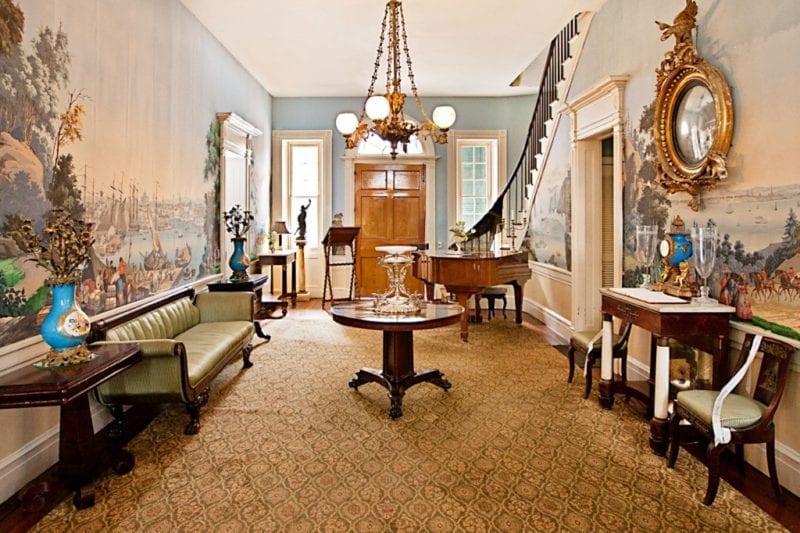 Views of North America in the Monmouth Historic Inn, Natchez 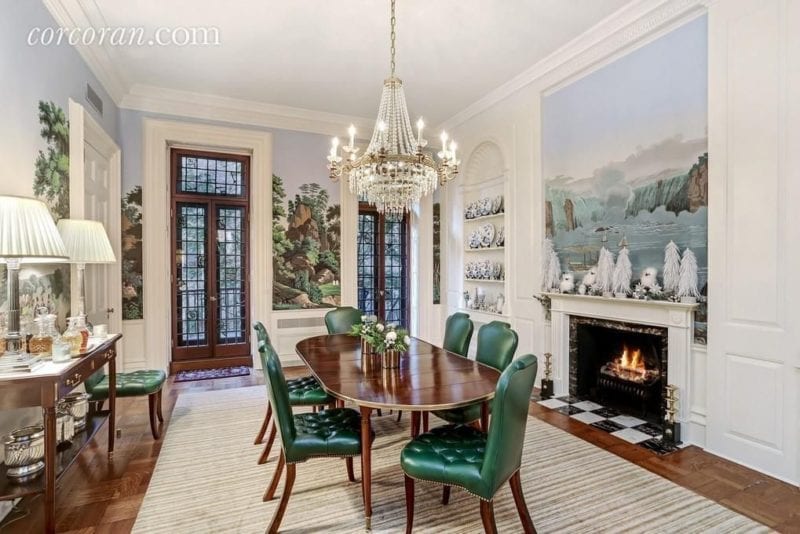 Views of North America from a Brooklyn Heights Townhouse for rent 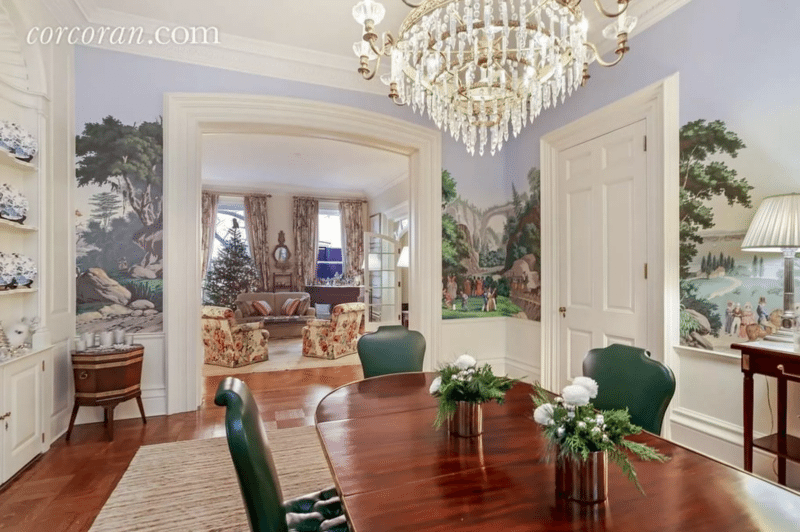 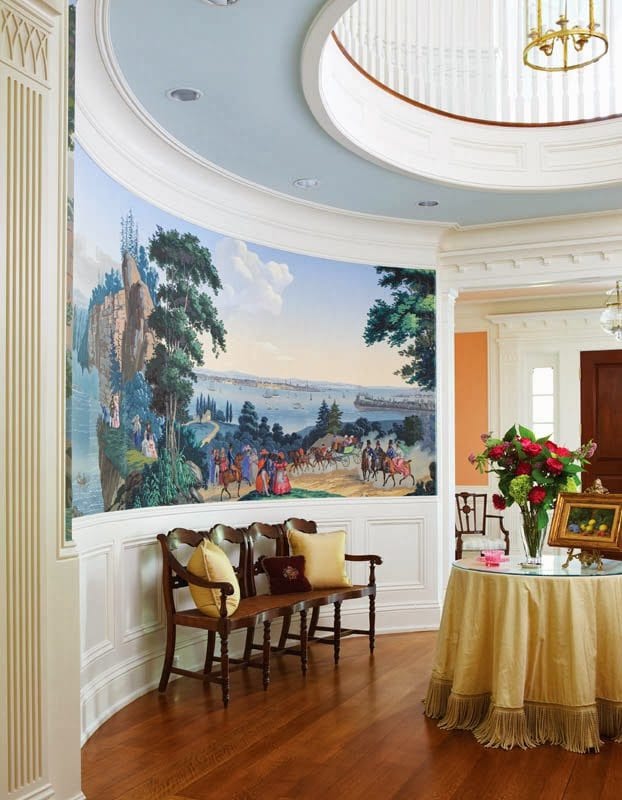 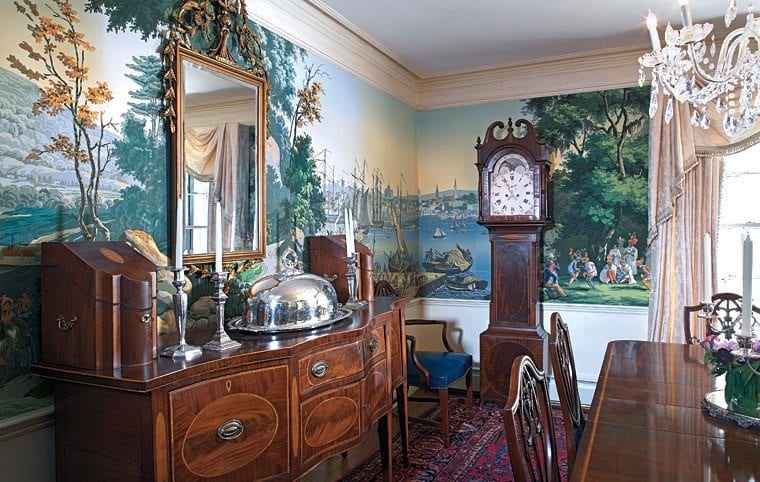 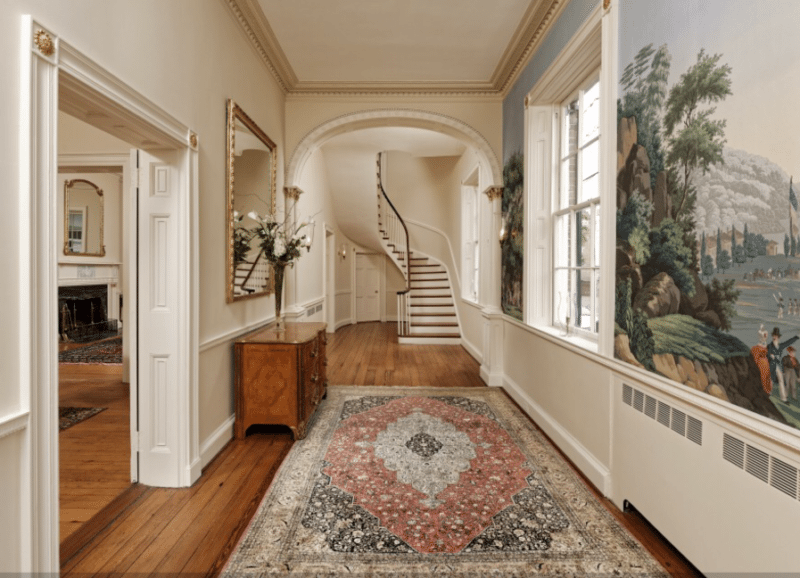 Views of North America in an Alexandria, Virginia home for sale 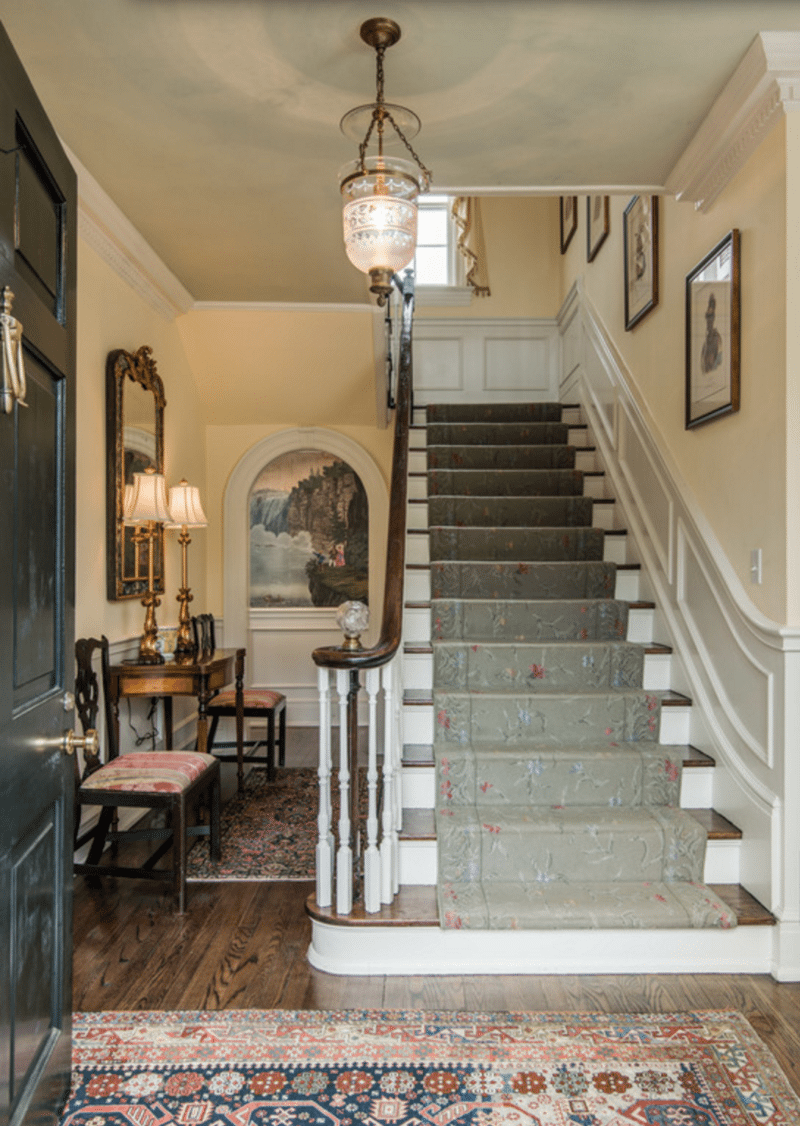 Views of North America from a Nashville real estate listing 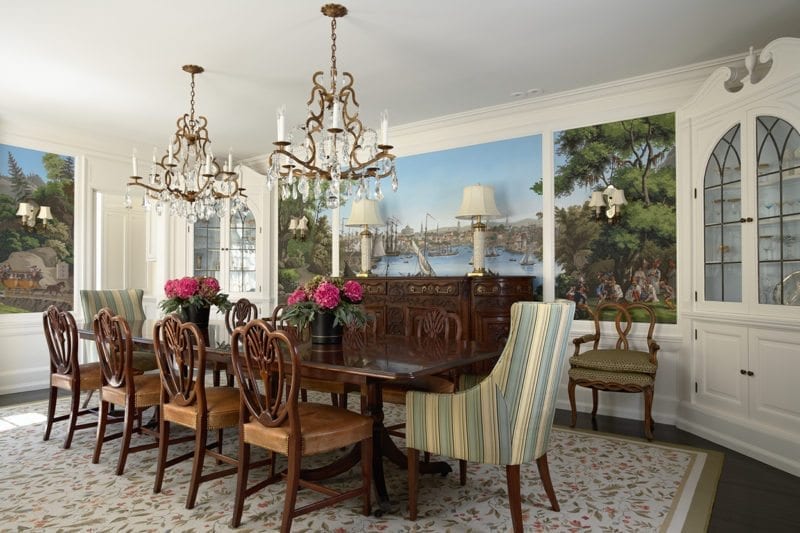 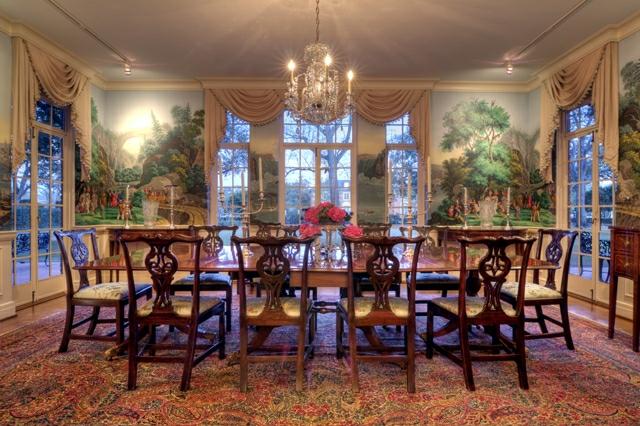 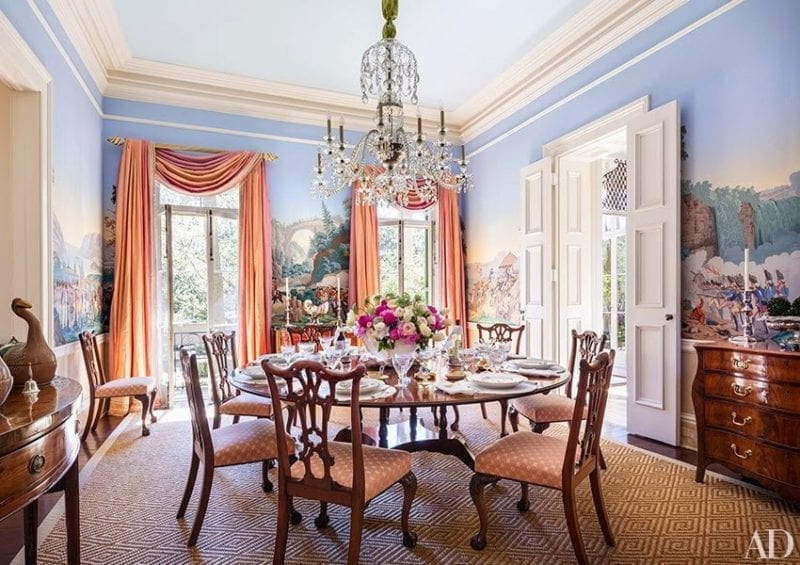 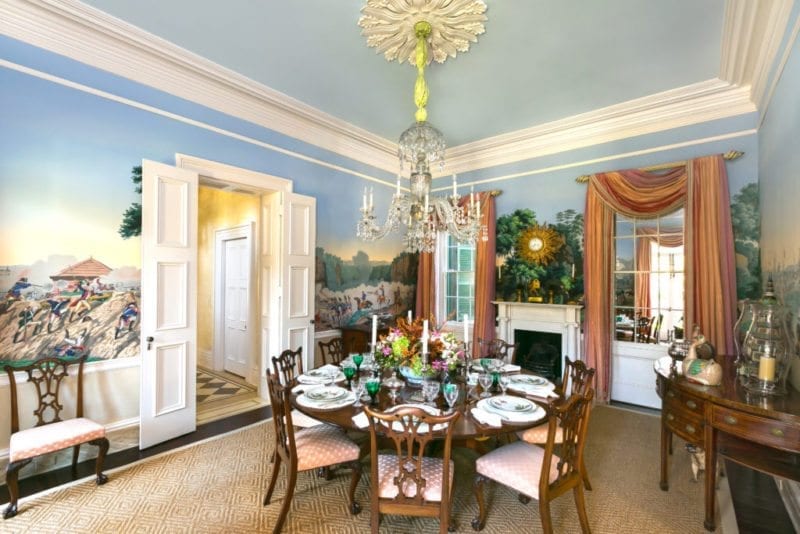 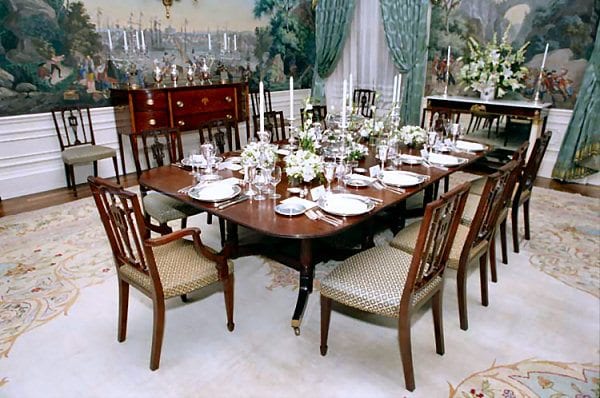 The War of American Independence at the private dining room, The White House, circa 1986

A little history on the White House private dining room from the White House Museum… “In 1961, as part of the Kennedy renovation, the room was converted into a dining room. As she had for the Diplomatic Reception Room, Jacqueline Kennedy found antique wallpaper of fanciful scenes to paper the room. However, rather than landscapes, these were scenes of battles of the American Revolution. Betty Ford disliked the battle scenes and had them removed to make the walls a bright yellow. The Carters chose to reinstate the battle scenes, however, and they remained until the Clintons covered the walls with a pale green silk covering. The second Bush family chose a patterned gold-and-cream wall covering and brought back the dramatic Nixon-era square-patterned rug,” source. 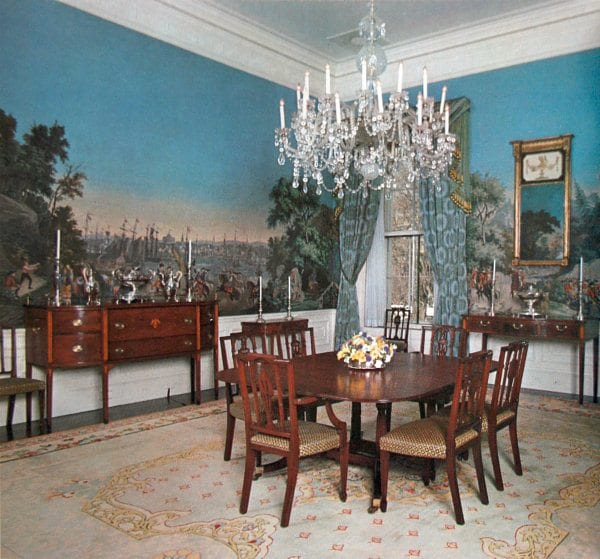 The War of American Independence at the private dining room, The White House, circa 1975 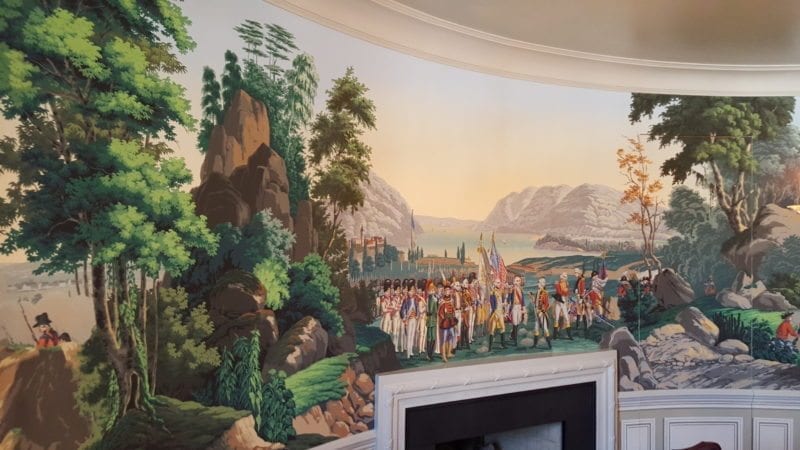 The War of American Independence via scenicwallpaper.com… this website has a plethora of really fun installation images! Click here for more examples of Zuber panels sorted by category. 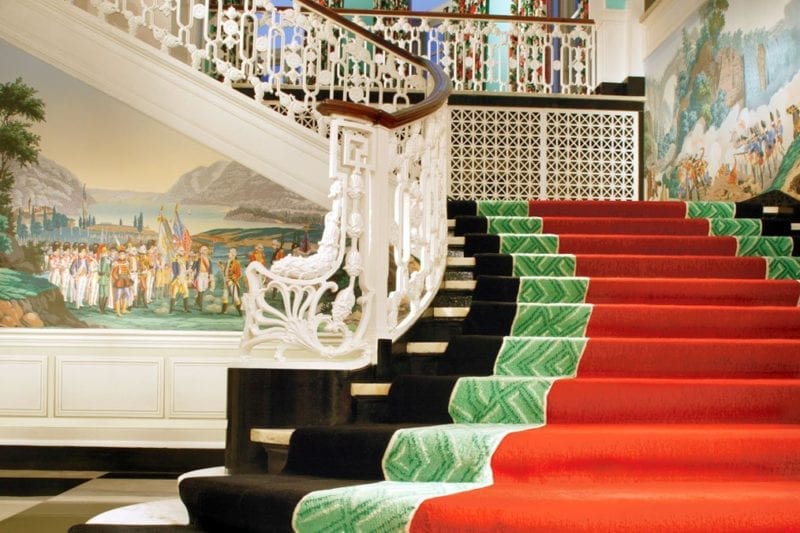 The War of American Independence at The Greenbrier

Zuber is the last manufactory in the world to create panorama sets to the board. These boards are classified Historic Monuments by the Ministry of Culture and are part of the French heritage. For additional information, please visit Zuber & Cie. In addition, Curbed recently ran a three part series with an overview, tips on restoration, and how to purchase. If you install these beautiful works of art in your home, be sure to back them first in muslin. Then they can be removed and reinstalled in case of a move. Patricia Altschul has relocated her Zuber panels to three different homes!