Alice Naylor-Leyland is one of my favorite follows on Instagram. By all accounts, her life appears to be a real-life fairytale, and through her I vicariously live out my English countryside fantasies. (I have previously featured her here, here, and here.)  Alice divides her time between a flat in London and her home in the English countryside. Built in the 19th century, Stibbington House is located in Cambridgeshire and has been in her husband Tom’s family since the 1970s.

Alice and Tom agreed from the outset that Nantclwyd Hall – Tom’s parents’ Wales estate decorated in the 1950s by the legendary John Fowler – would be a design inspiration for Stibbington. Then they mixed their traditional good taste with playful details, enlisting decorator Flora Soames to help find fabrics and new resources. Decorative wallpapers, an abundance of chintz, walls covered in pictures and plates, and 18th- and 19th-century furniture are now the centerpiece of Stibbington’s decor.

Photography by Simon Upton and captions by Amanda Brooks for Architectural Digest. 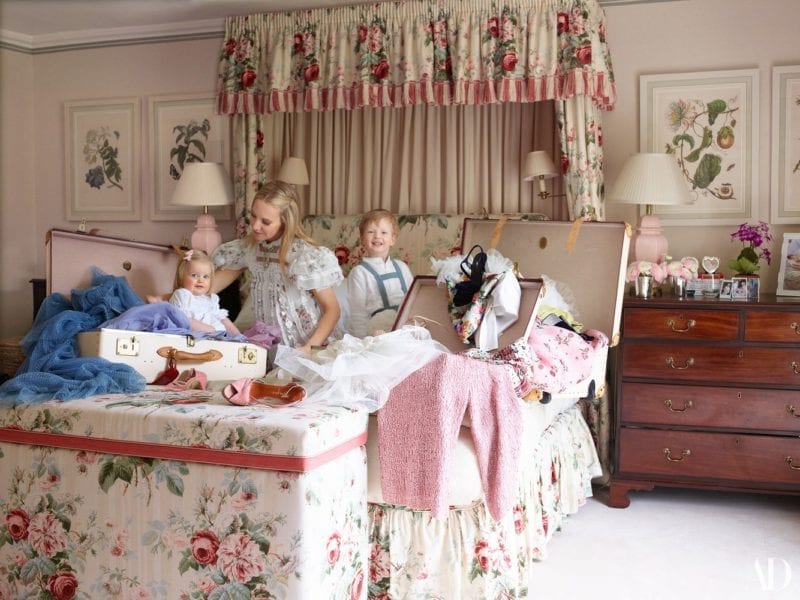 Colefax and Fowler’s jubilee rose chintz adorns the master bedroom, where Alice (in a Giambattista Valli couture dress) sits with her children.

Heir to one of the great real-estate dynasties in England, Tom worked in the furniture department at Christie’s before going on to manage his family’s properties. With his experience, he weighs in heavily when it comes to choosing the “right” frame for a piece of art or determining the “correct” proportions of a sideboard for the entry hall.

Alice infused a feminine take on English country style throughout. Every room is defined by pattern or texture or a sophisticated mix of colors, much like Alice’s celebrated fashion sense. Her love of coordination is evidenced in lampshade trims that complement upholstery piping. In each of the guest bedrooms, a floral-covered luggage rack mirrors the curtains and throw pillows. “Thank God I’ve been around my mother-in-law enough to see how she runs her homes,” she said. “Not one centimeter is unconsidered; that attention to detail is key.” 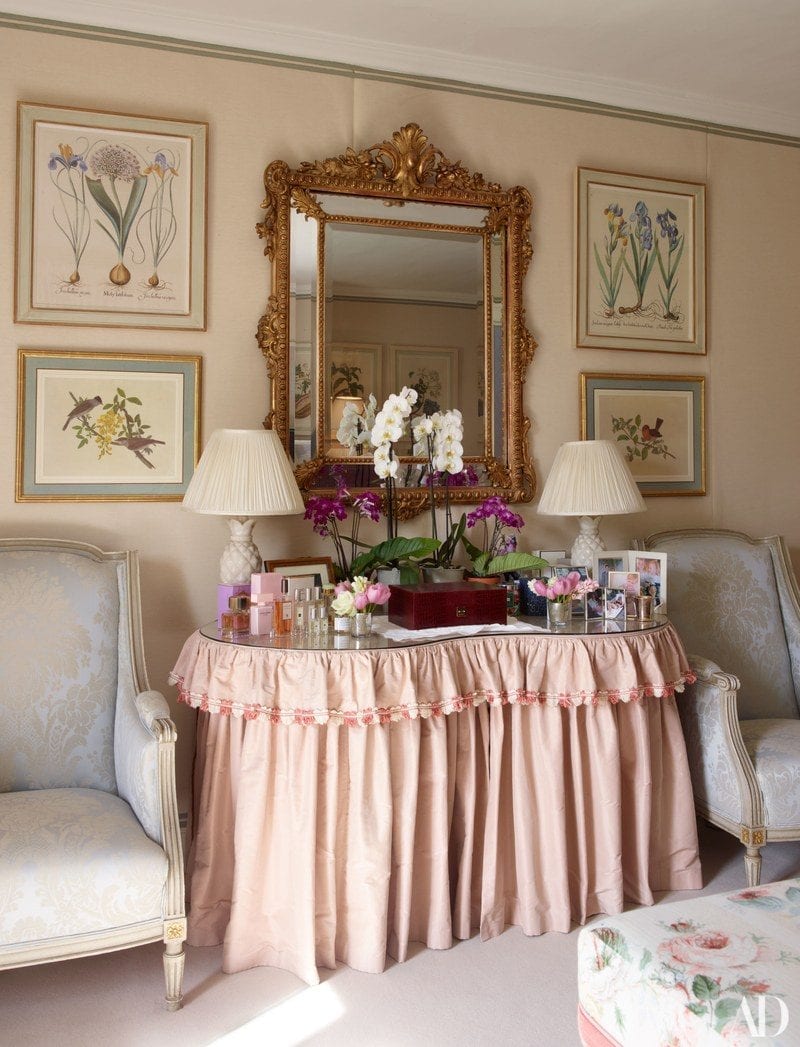 She credits her own mother’s influence (read about Alice’s elegant mother, Serena Fresson, here) for the cozy and welcoming atmosphere of the eight guest rooms, outfitted with every amenity a visitor could want. And she points to the example of the legendary Nancy Lancaster’s drawing room for showing that it’s the layers—the things you collect and add over the years—that give a house its soul. 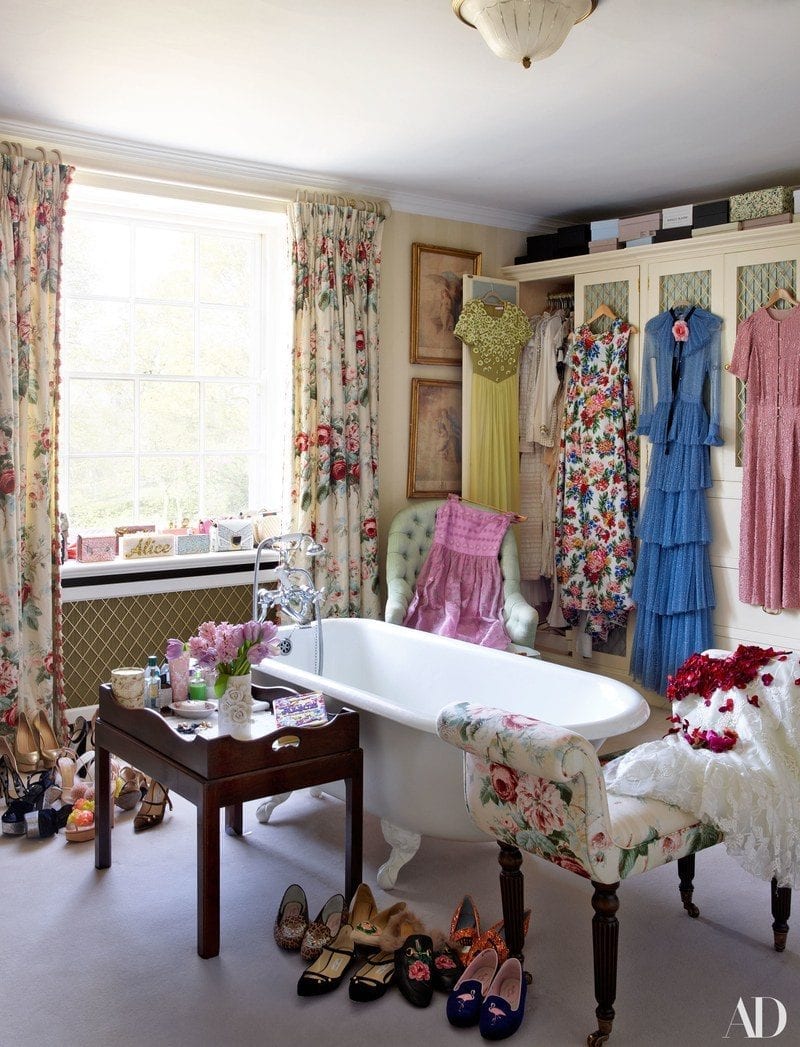 Colefax and Fowler’s jubilee rose chintz dresses the windows and a bench in Alice’s bath; tub and fittings by Czech & Speake. 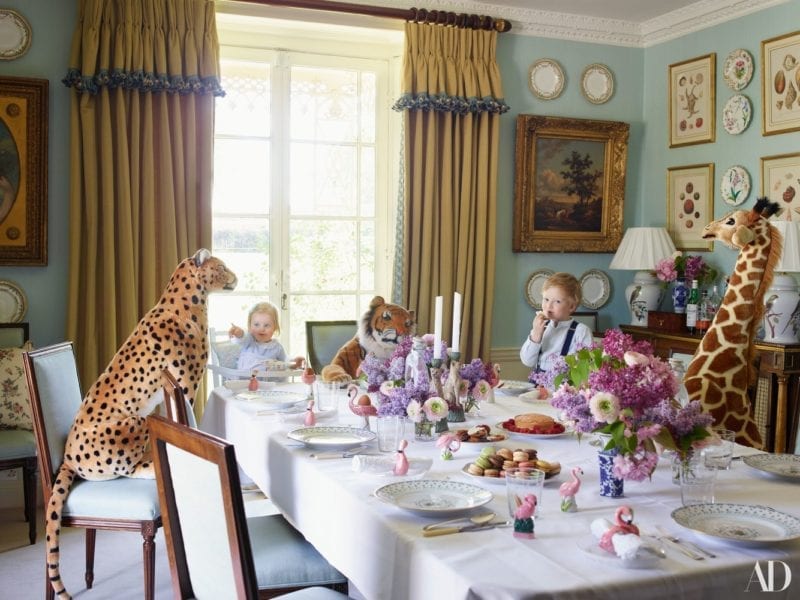 Nancy and Billy Naylor-Leyland indulge in sweets in the dining room of Stibbington House. The windows are curtained in a Claremont fabric, edged with Samuel & Sons tassel fringe, and a Thibaut wallpaper covers the walls. 18th-century chairs in a Colefax and Fowler silk; toy animals from Selfridges. 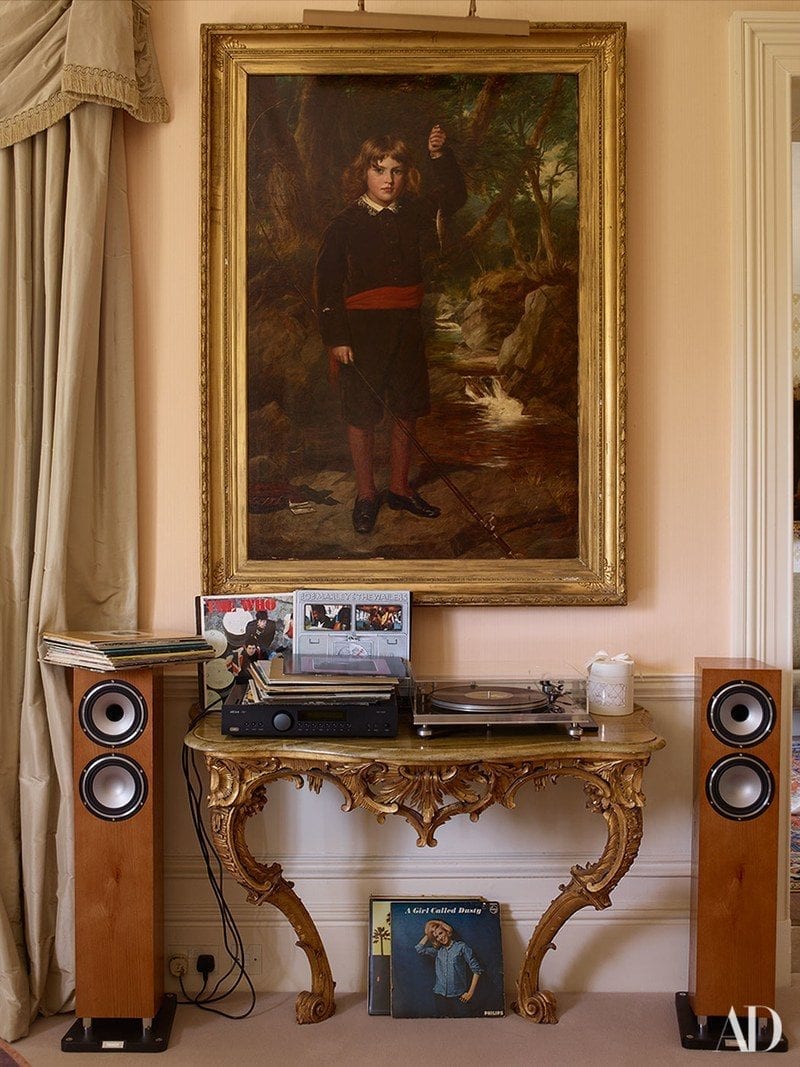 The young Waltonian, by James Faed, hangs above a vintage record player in the drawing room. Speakers by Tannoy. 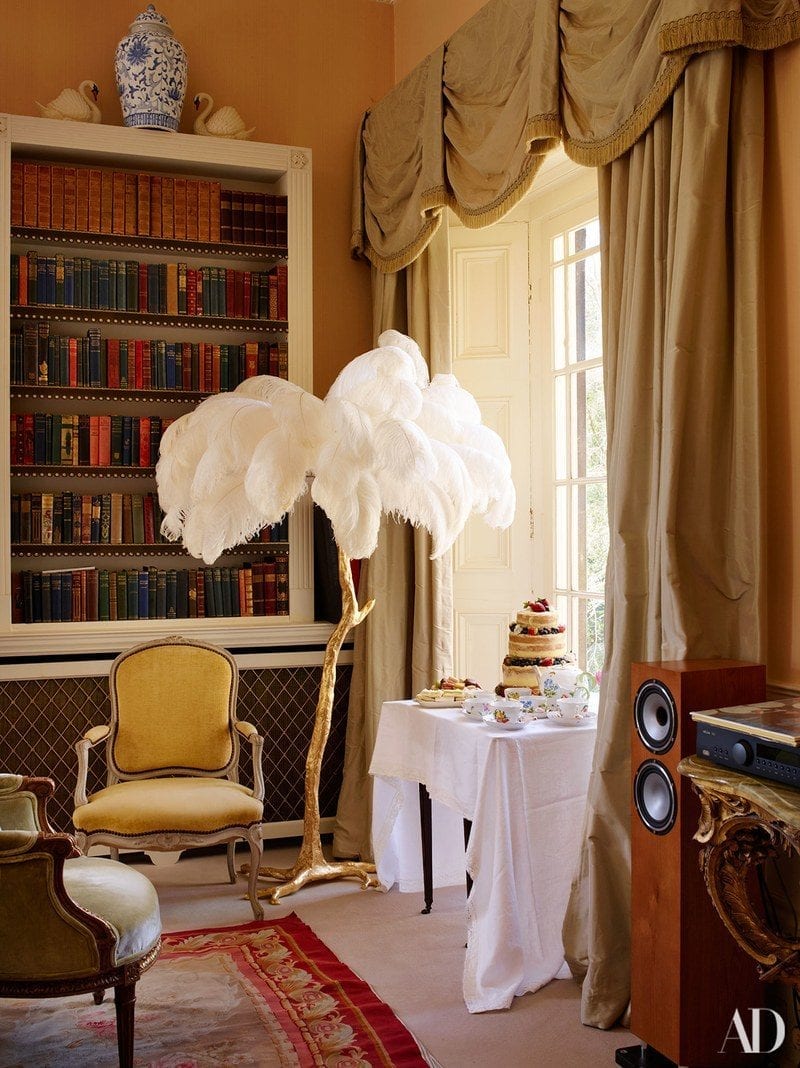 A corner of the drawing room. 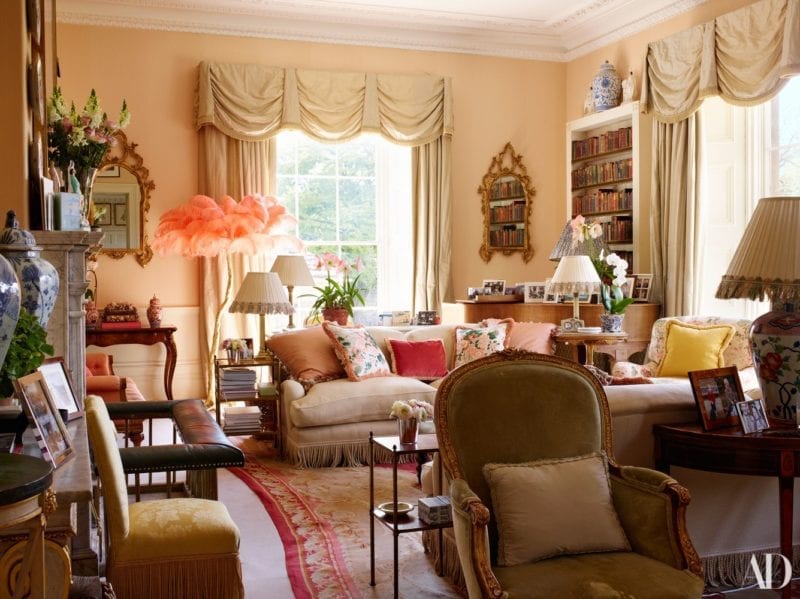 In the drawing room, an ostrich-feather lamp by A Modern Grand Tour stands next to a custom-made sofa upholstered in a Le Manach fabric. Pillows of a Lee Jofa chintz; Claremont silk curtains with custom trim; antique Aubusson rug. 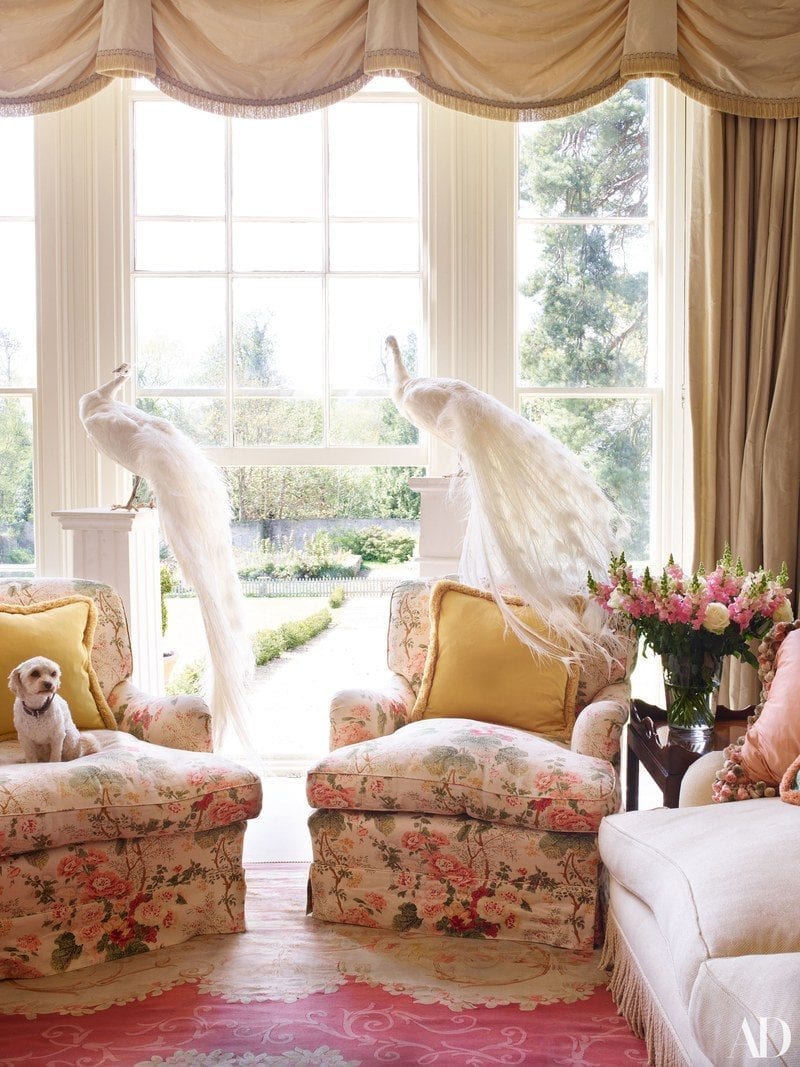 In the drawing room, Ethel the Cavapoo perches on an armchair by Howard Chairs ltd. upholstered in a Lee Jofa floral. Taxidermy white peacocks by A Modern Grand Tour. 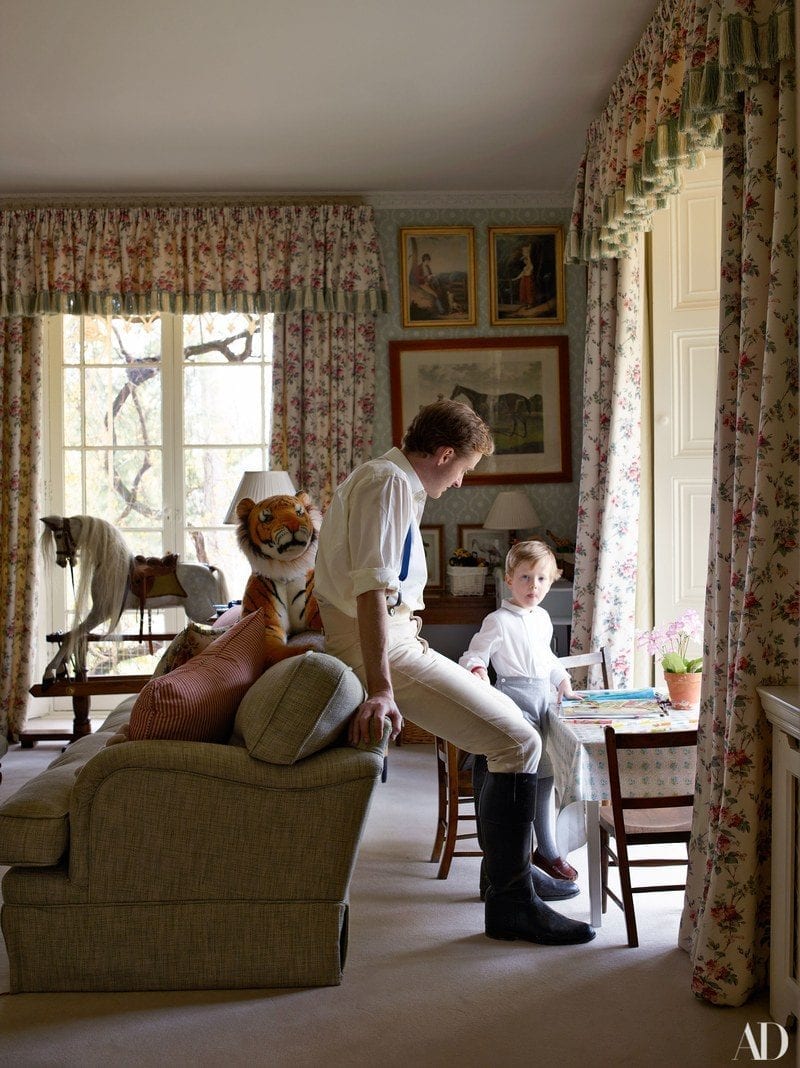 In the playroom, the curtains are of a Bennison linen edged with Colefax and Fowler fringe, and the walls are covered in a Cole & Son wallpaper. Tom sits on a sofa dressed in a Titley and Marr fabric. 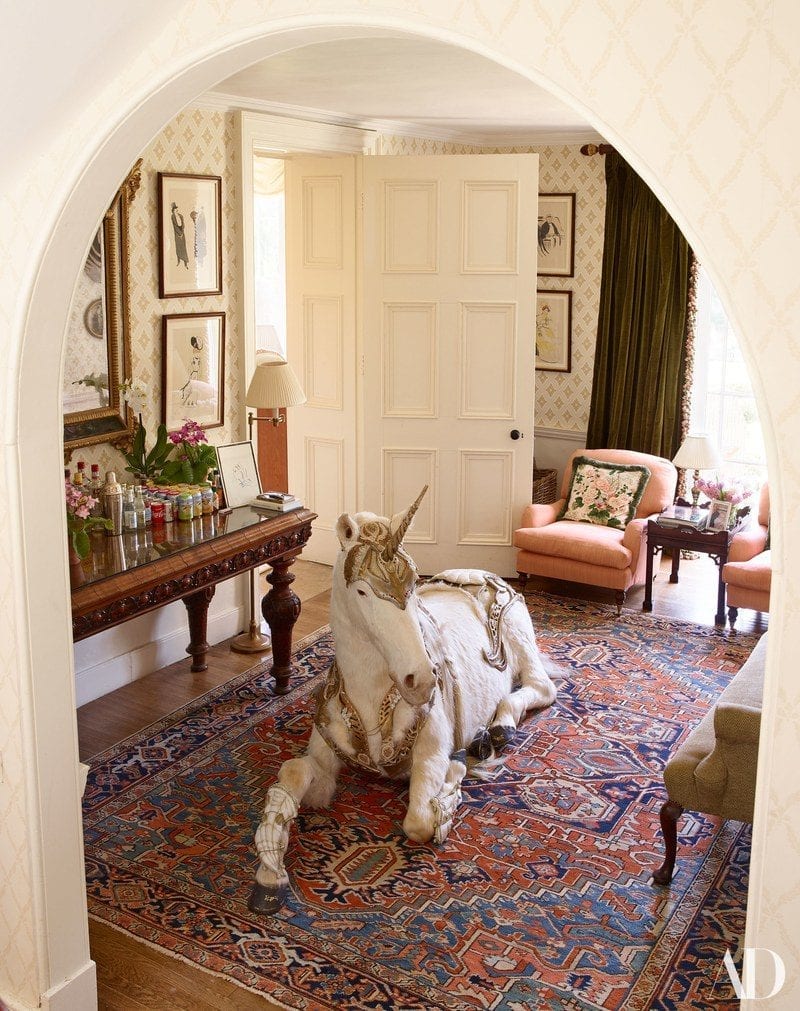 In the Bar room, a taxidermy “unicorn” by A Modern Grand Tour sits atop an antique Persian rug from Christie’s. Curtains of a George Spencer designs velvet with Samuel & Sons trim. 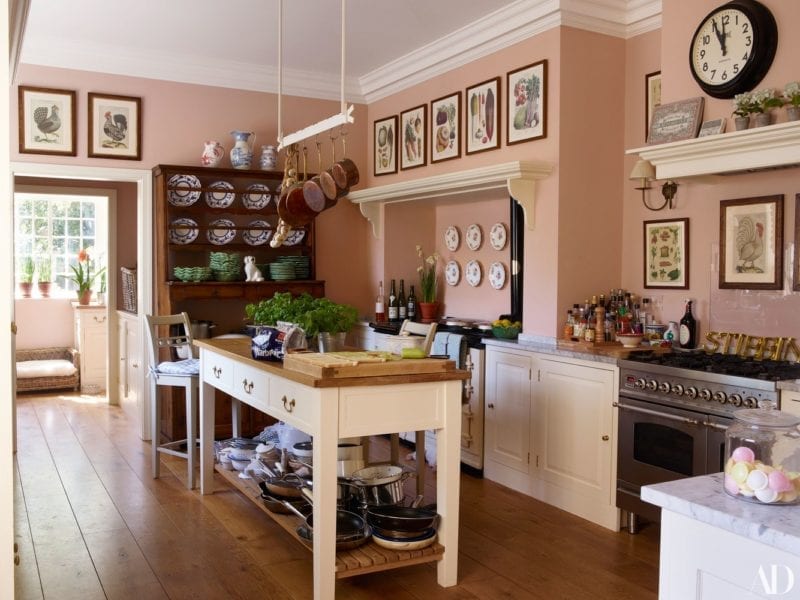 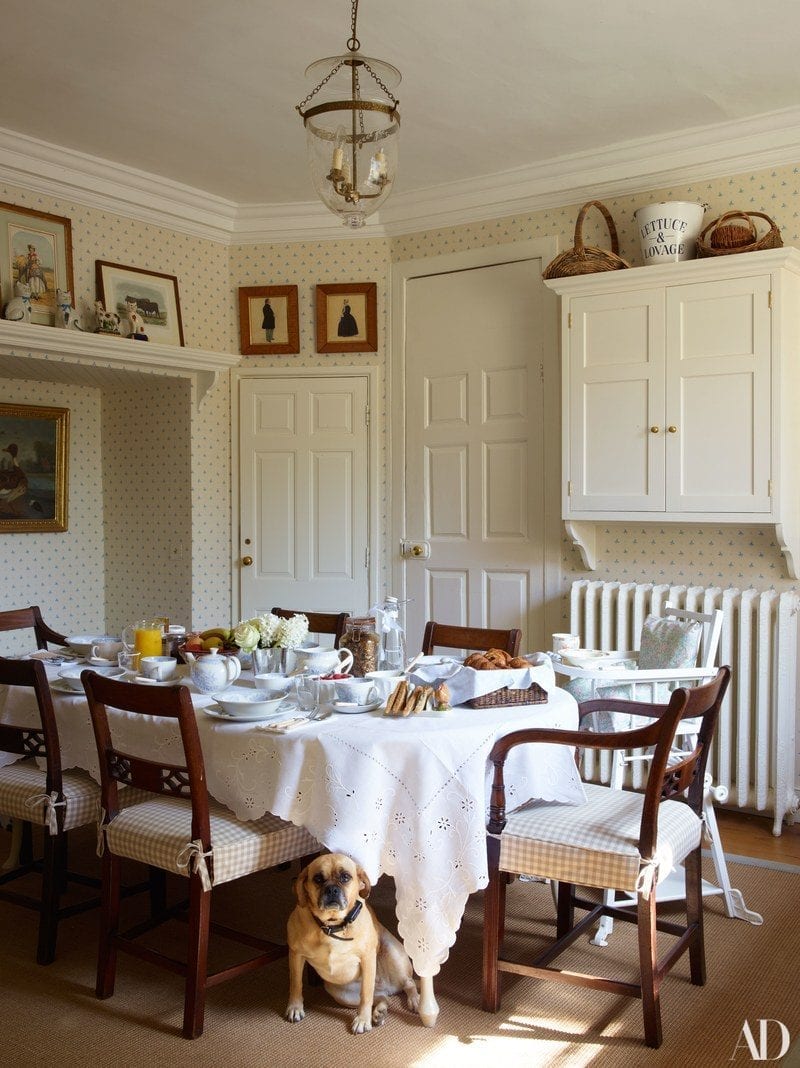 Edie, a puggle, sits under the pantry table set for breakfast. A sprig wallpaper by Colefax and Fowler; hanging lantern by Vaughan. 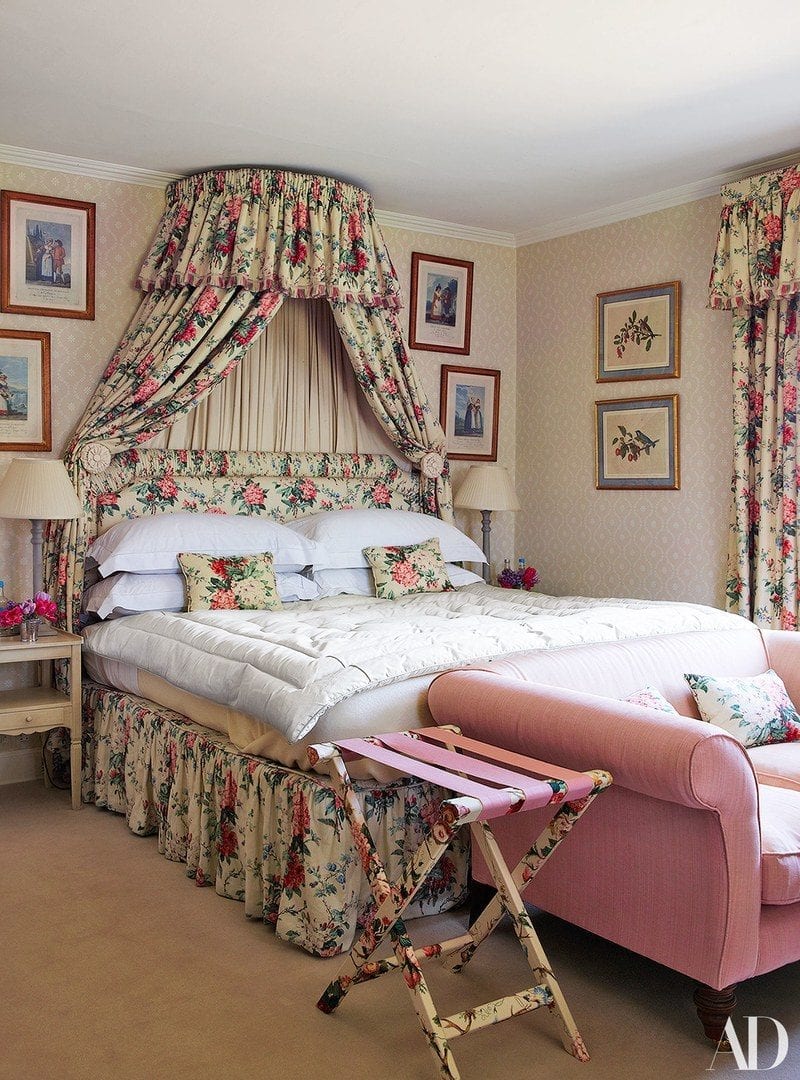 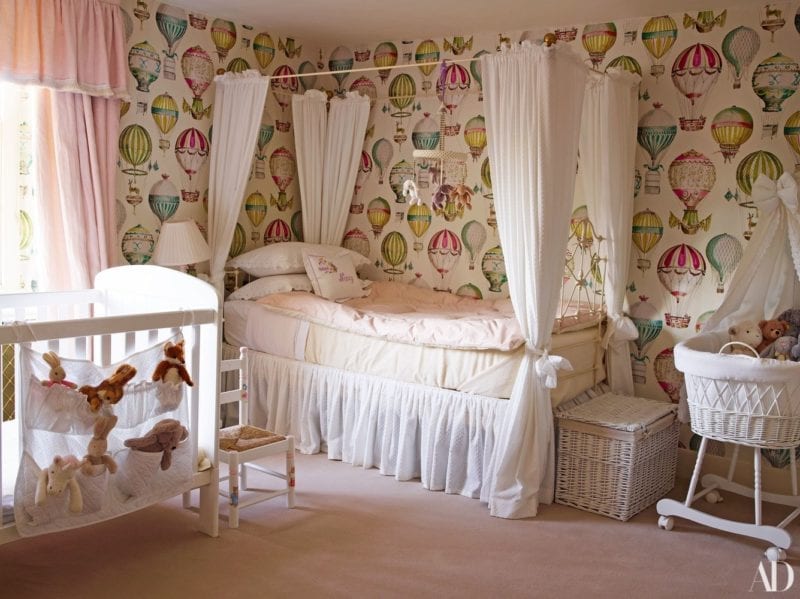 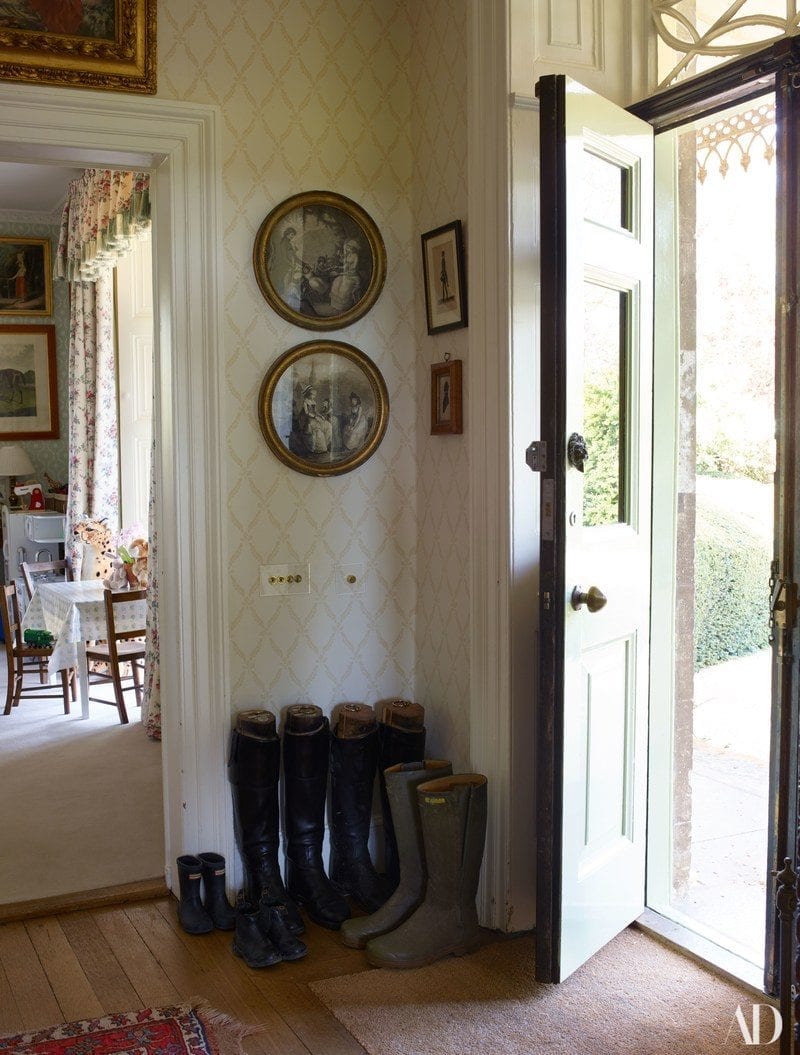 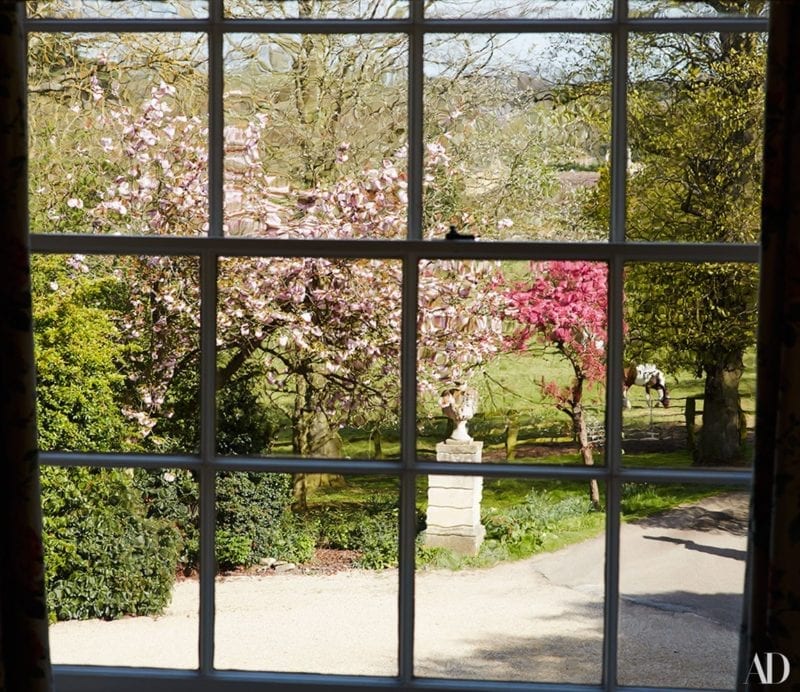 Looking out onto the gardens. 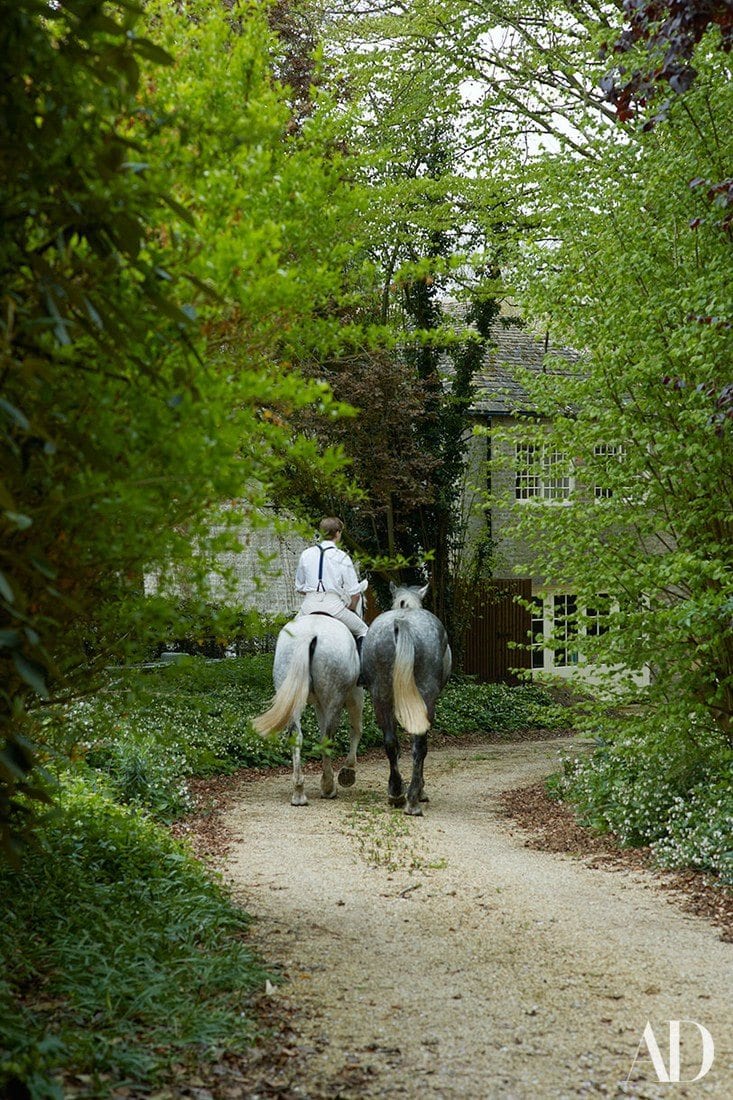 Tom on a path at Stibbington house. 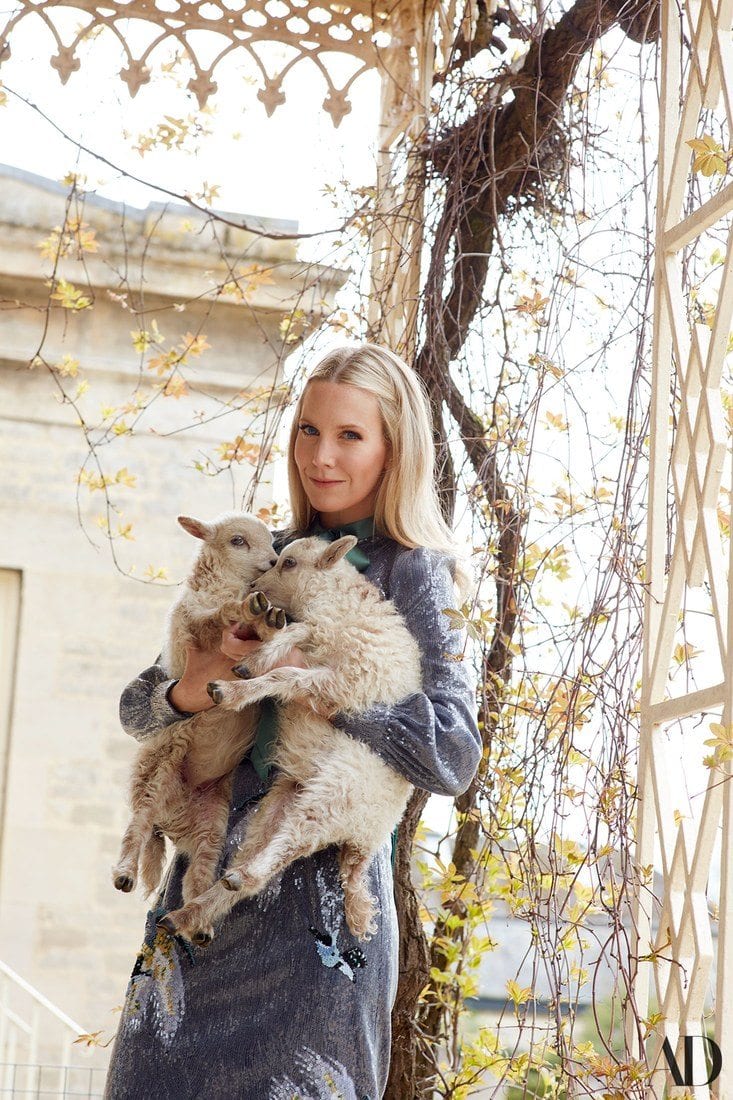 Alice in an Erdem dress with her lambs. 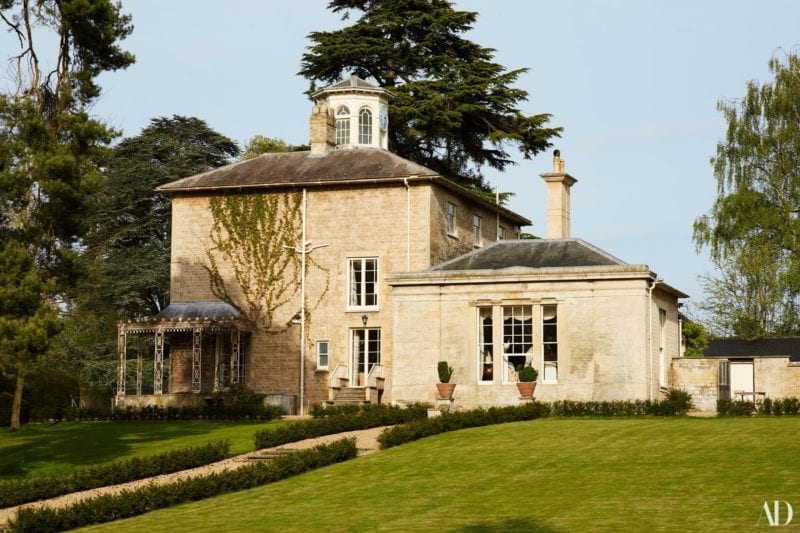 The 19th-century house is built from local ketton stone.

Chintz is officially back, and 30-year-old Alice’s home is proof!  Alice’s friend, model Poppy Delevingne, commented that she hadn’t seen that much chintz since she was last at her grandmother’s house.  “I like using chintz and florals because they haven’t been seen for a while so, ironically, they look fresh and new,” Alice said in another interview.

For daily inspiration from Alice’s enchanted wonderland filled with pastel-colored sheep, unicorns, rainbows, cherubic children, and couture clothing you can follow along via Instagram. This feature can be read in entirety via the September 2017 issue of Architectural Digest.