In honor of Memorial Day, I am revisiting a patriotic inspired summer house in Maine I originally posted in 2013… Built in 1905, this former hotel was transformed by the homeowners, designers John Knott and John Fondas, as the perfect private retreat. Located on the remote Little Cranberry Island where the only year-round residents are lobstermen, this summer home is off the beaten path and only accessible by boat.  There is one little store, and no cell-phone signal. It is truly a place to escape! Let’s take a tour with images and captions from the April 2013 issue of House Beautiful… 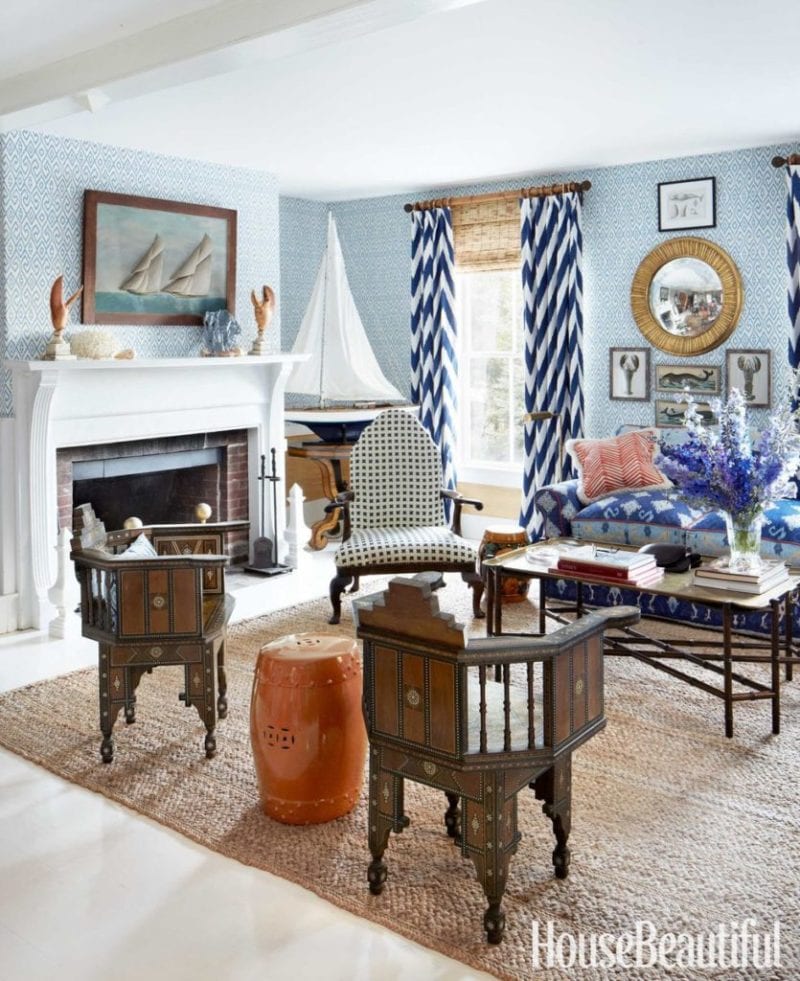 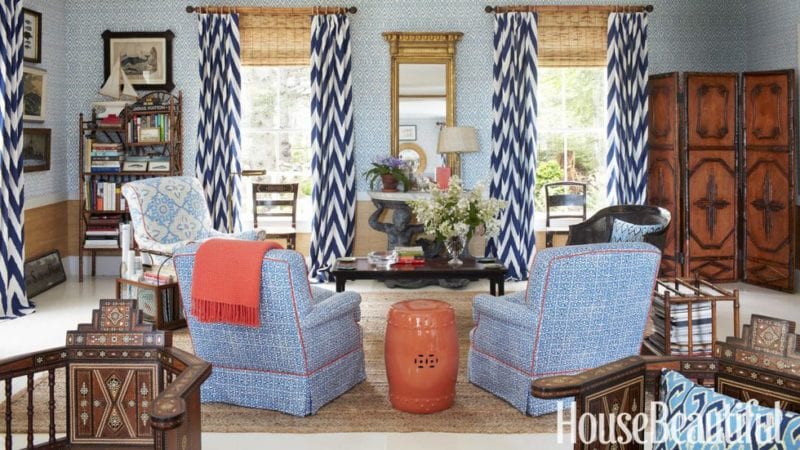 The bold geometry of curtains in Quadrille’s Tashkent and an Adirondack folding screen anchor the lively play of China Seas fabric patterns in the living room. Nitik II trimmed with Pimento on a pair of vintage armchairs, New Batik on an Albert Hadley armchair, and Aquarias on throw pillows. Framed whale prints and a mermaid console add a salty splash to the mix. 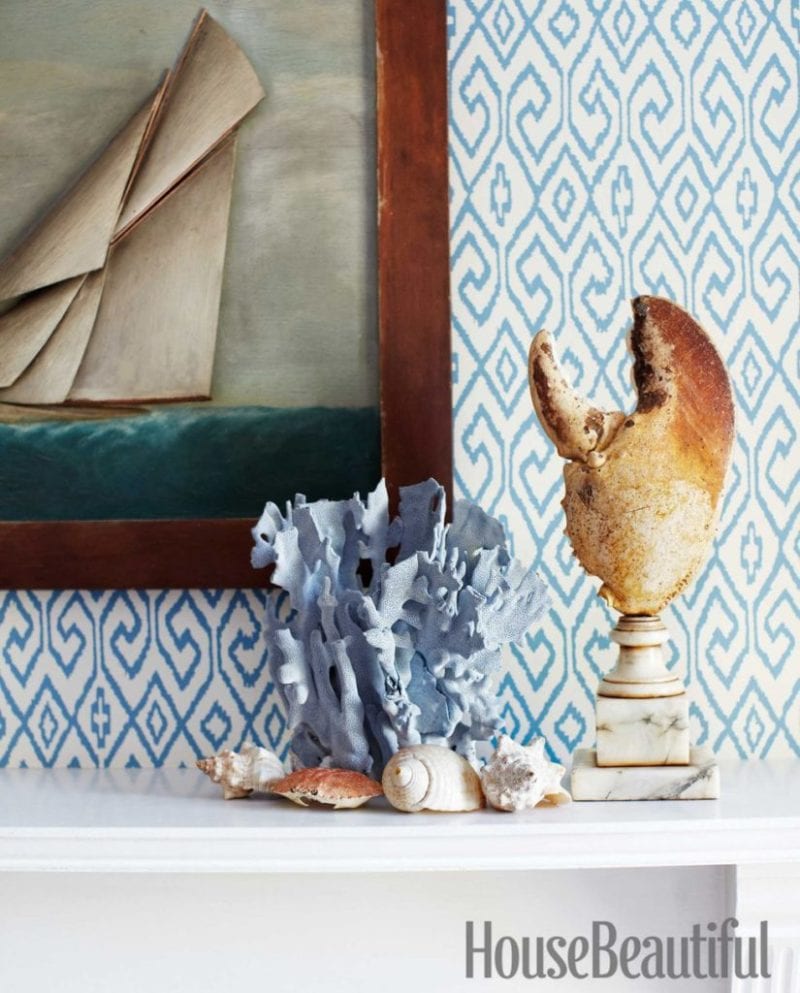 Knott retrieved a 1970s ikat from his archive for this slipcover. 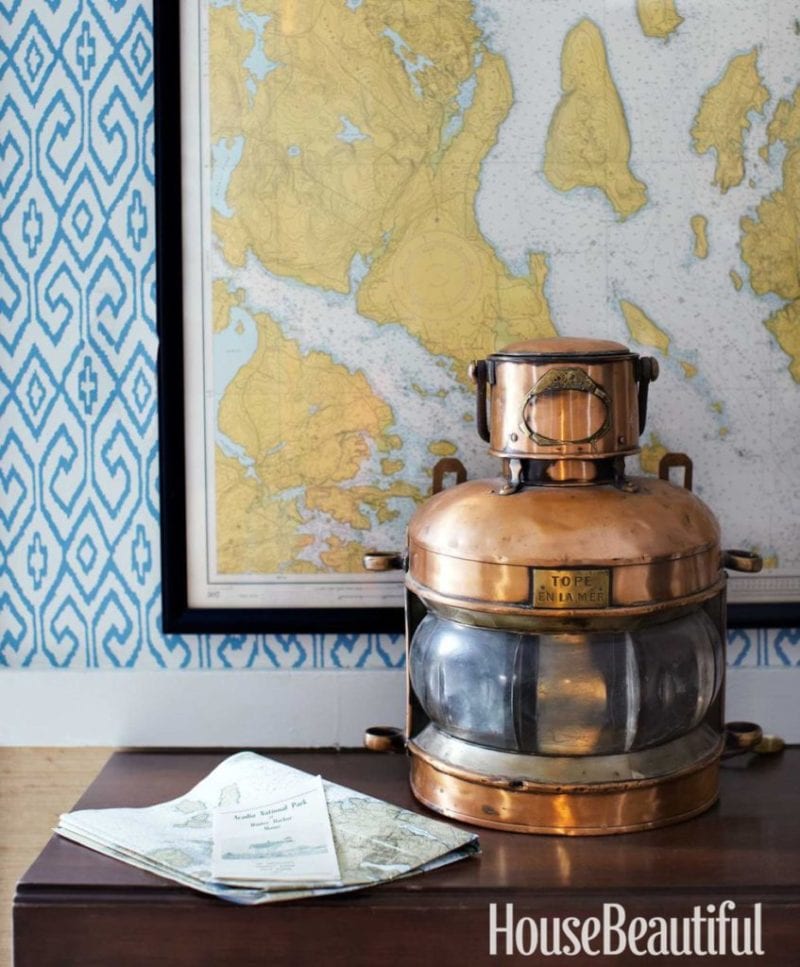 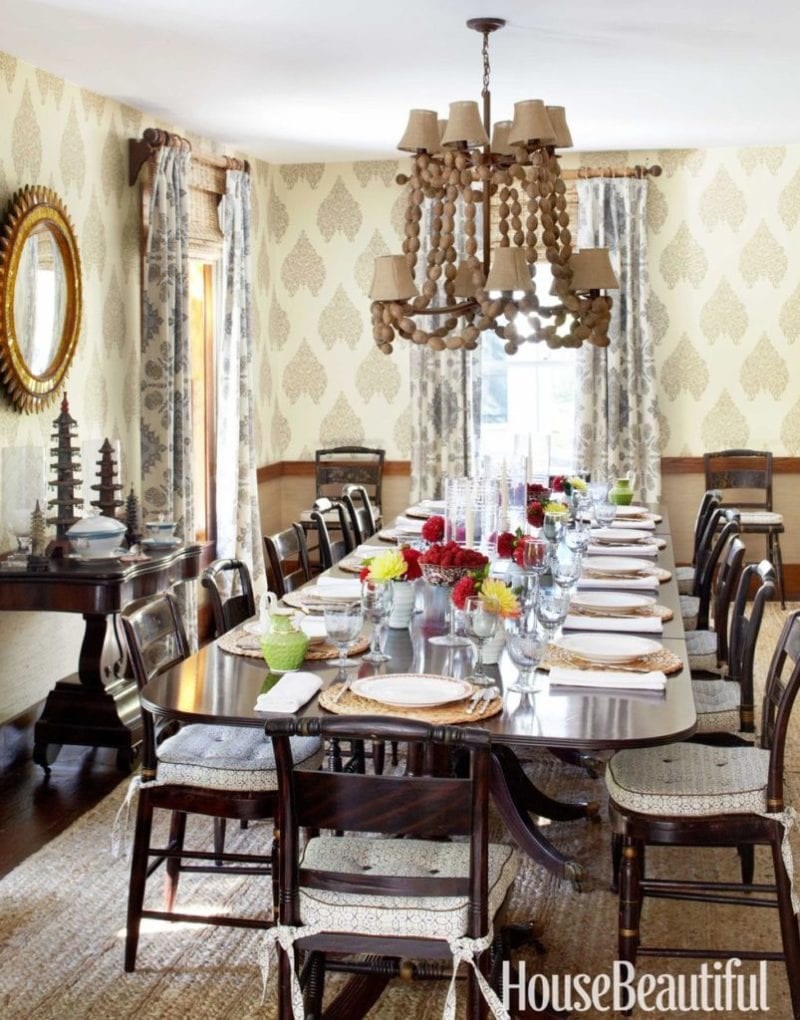 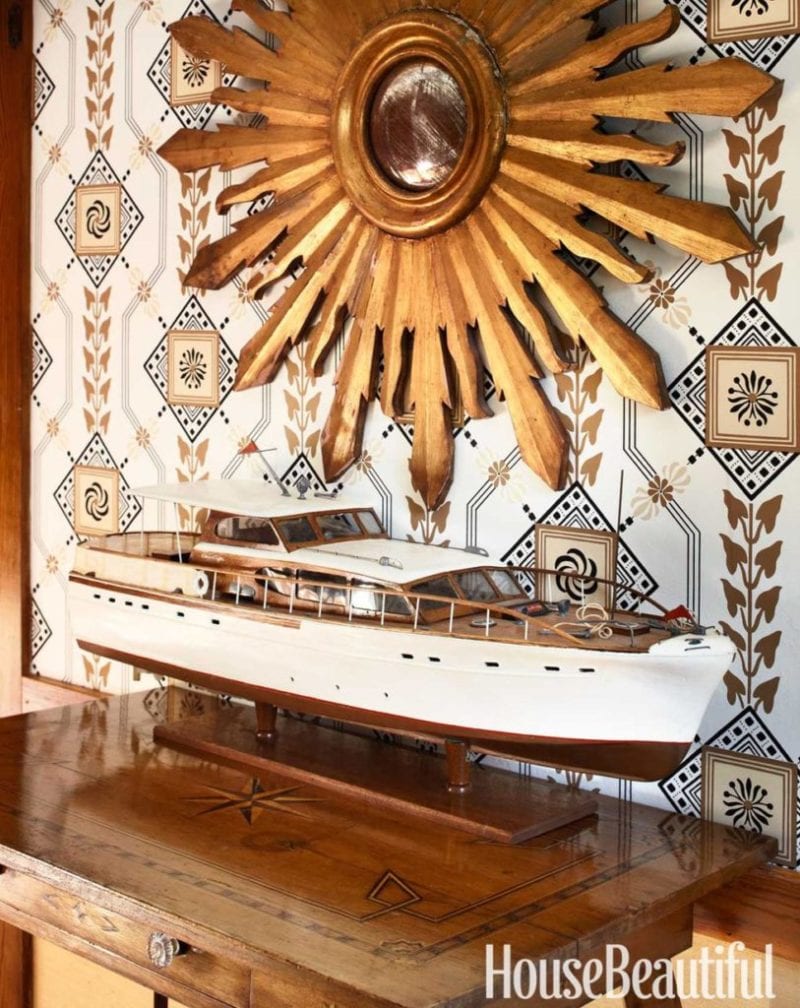 A 1958 model Chris-Craft on a table made by a 19th-century sea captain. 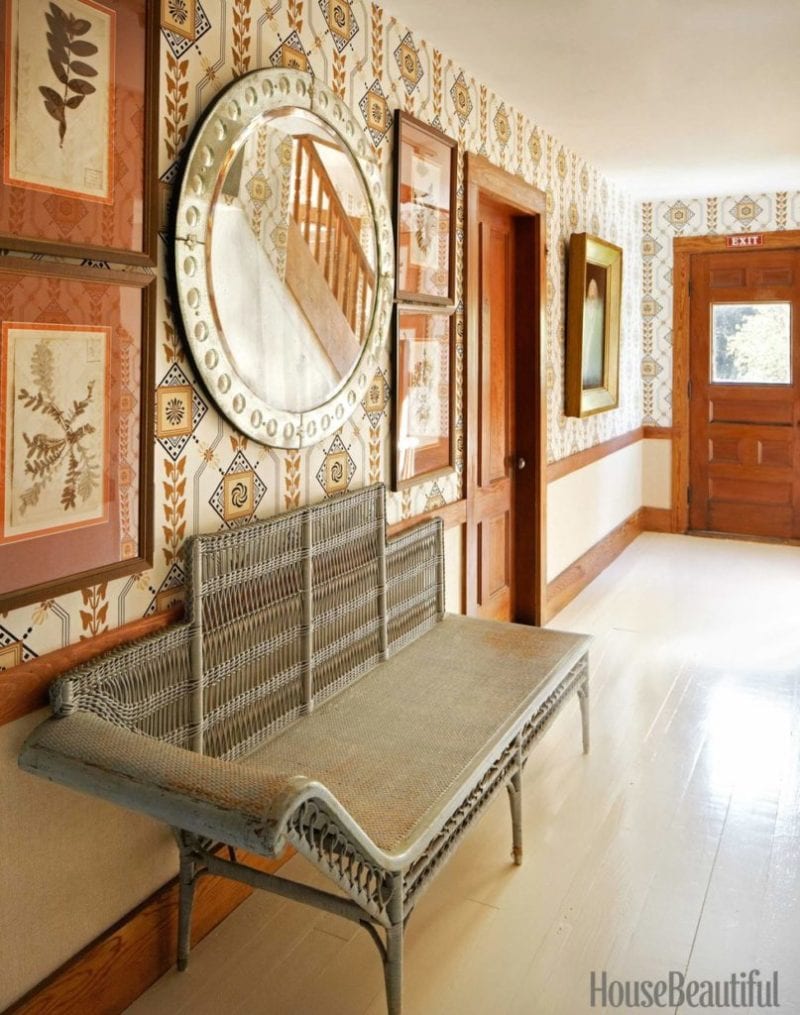 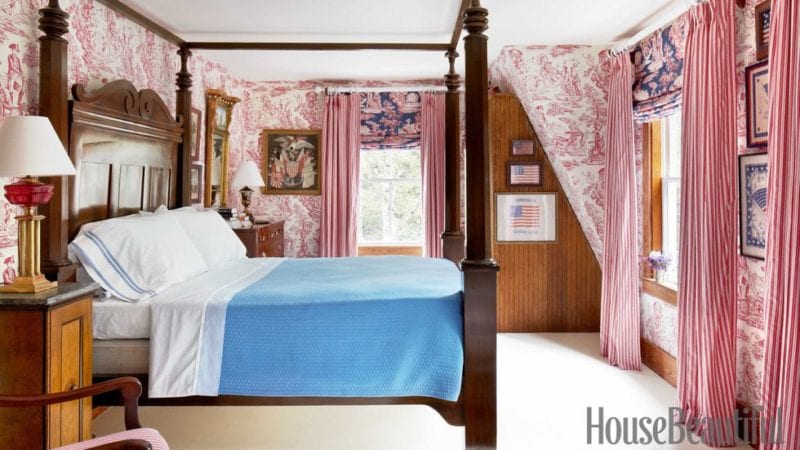 An American Empire four-poster in the Greek Revival style just clears the master bedroom ceiling. The bed’s monumental scale befits the wallpaper, Quadrille’s Independence Engraving, depicting George Washington at the reins of a leopard-drawn chariot; the design was taken from a 1783 British printed fabric. 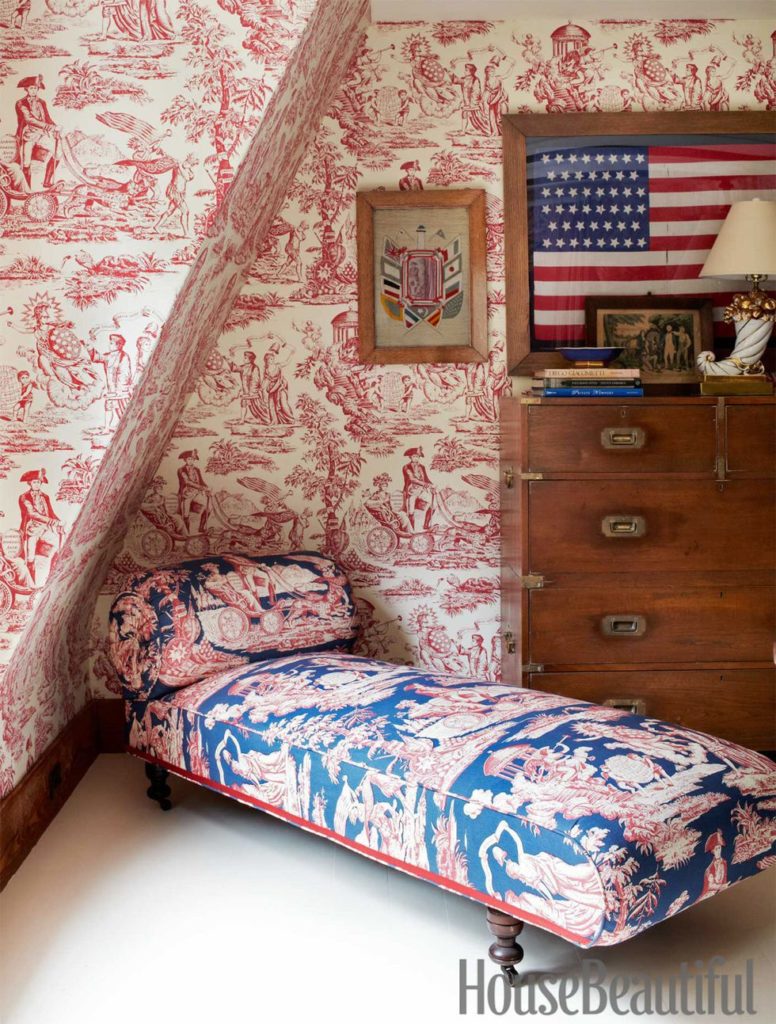 Independence Toile, the same pattern with a blue ground, covers the daybed next to a 19th-century English campaign chest. 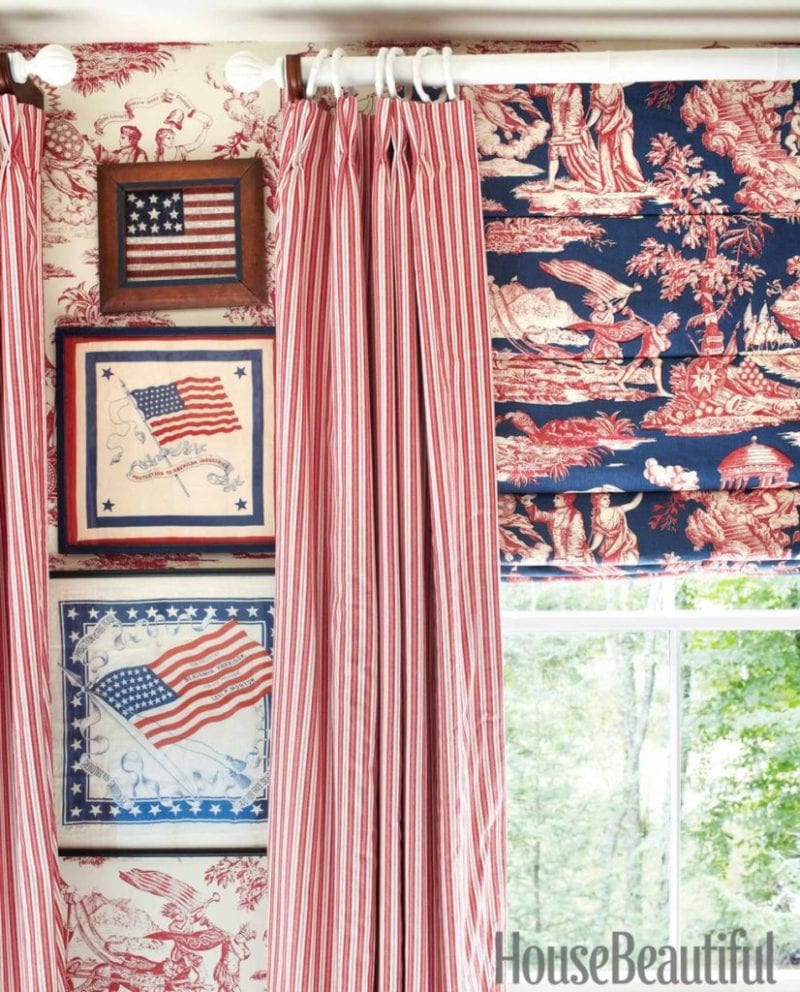 The patriotic theme sprang from Fondas’s collection of Washington memorabilia and American flags. 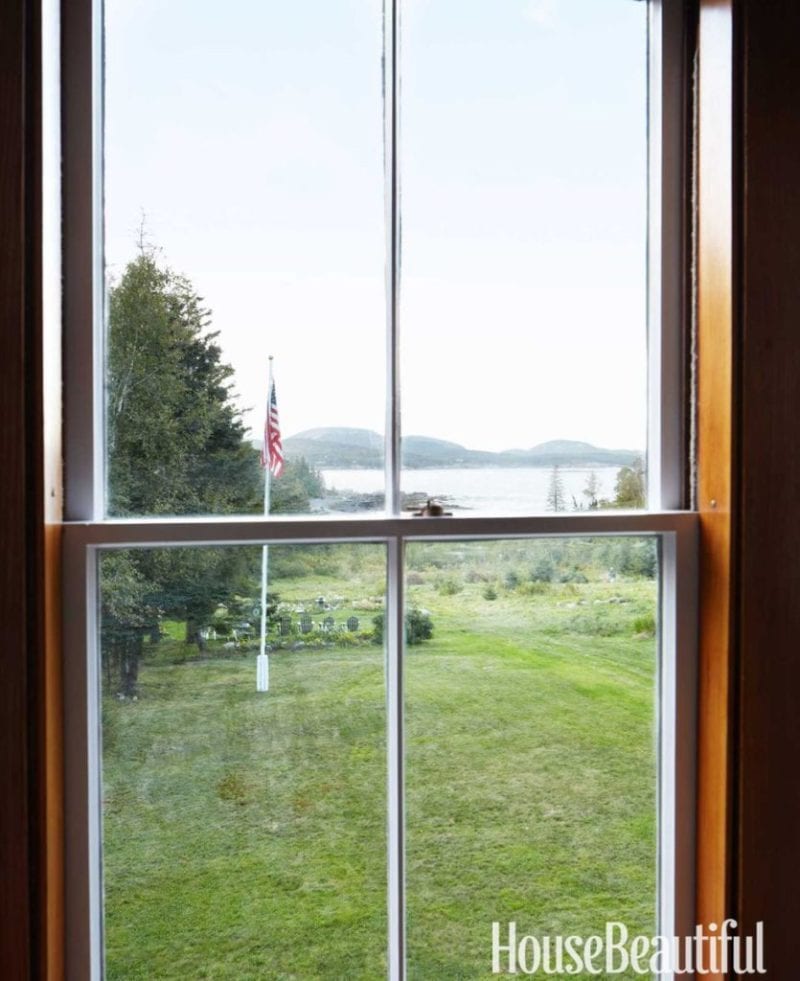 Restored windows frame views of Cadillac Mountain and Acadia National Park that have barely changed since Frederic Church painted them in 1850. His canvases inspired Maine’s first wave of summer visitors. 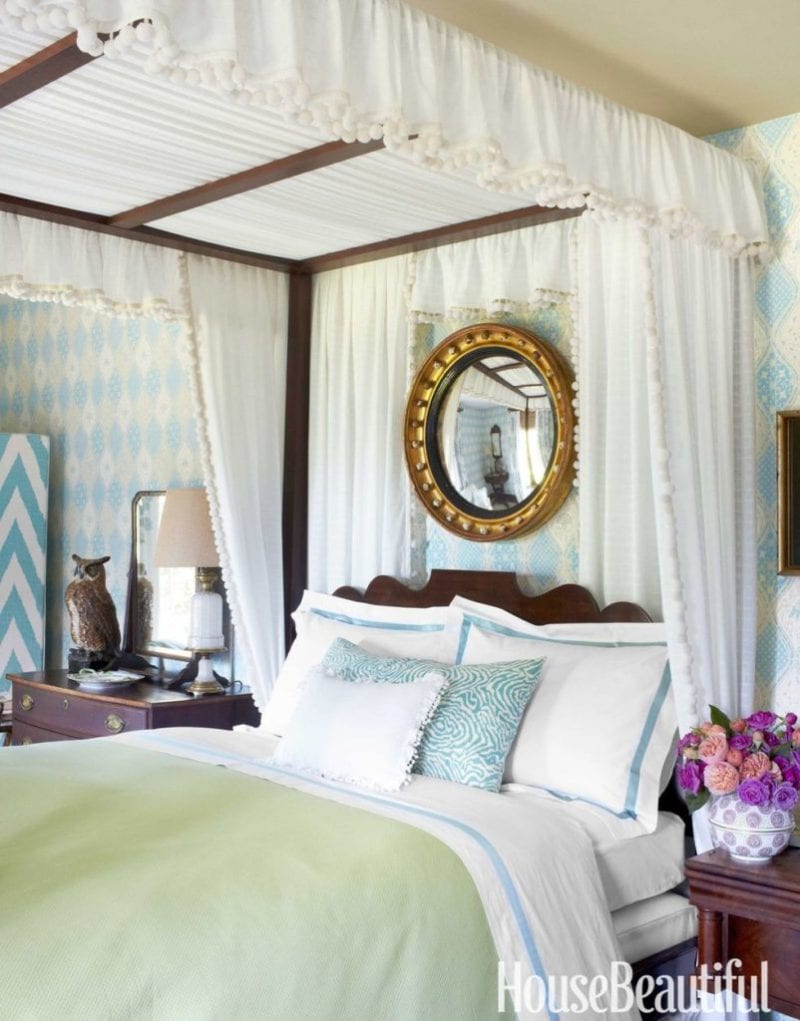 For Fondas, the white canopy recalls Early America as well as the colonial nostalgia of his native Bahamas. This guest room’s Georgian four-poster is canopied in check linen with a pom-pom fringe and dressed with Matouk linens. Hanging a mirror above the headboard, Knott explains, is a European touch. 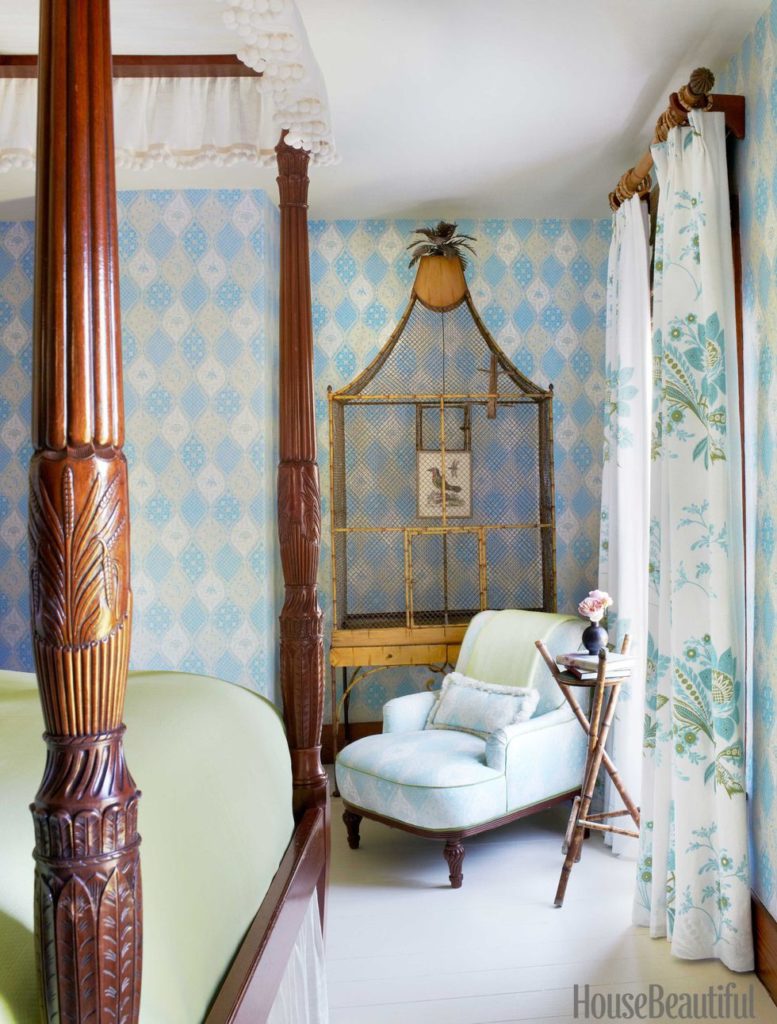 Curtains in Home Couture’s Lorraine flank a bamboo tripod from Emerson Antiques in Blue Hill, Maine. The Aesthetic Movement chair is upholstered in the same batik pattern used on the walls. A bird print (“Our low-maintenance pet,” Knott says) perches in the 19th-century French cage. 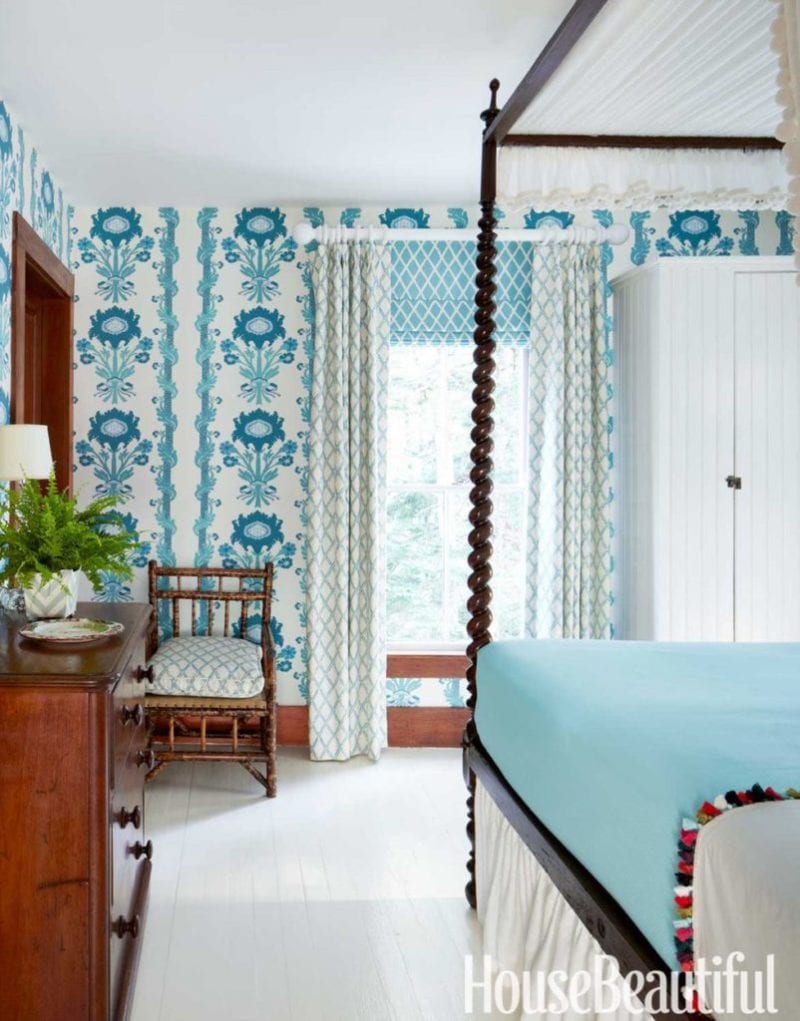 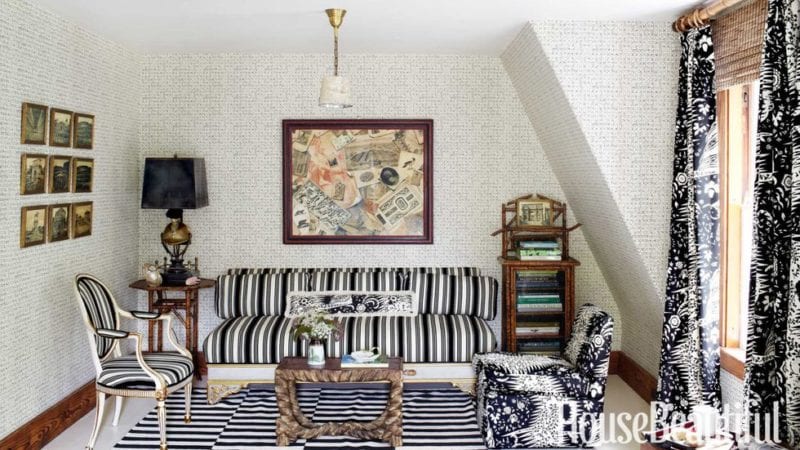 Quadrille’s Les Indiennes fabric had never been printed in black until Knott recolored it to match the stripe in a guest room. 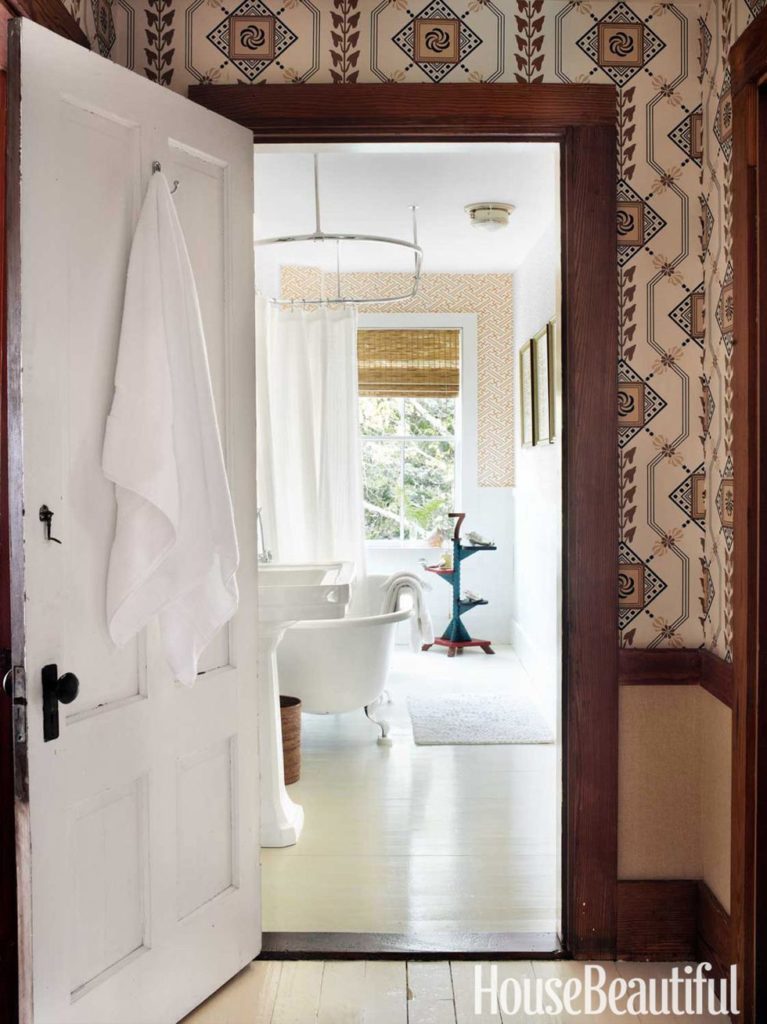 White-painted wainscoting, a pedestal sink, and a claw-foot tub give the master bath a timeless appeal. 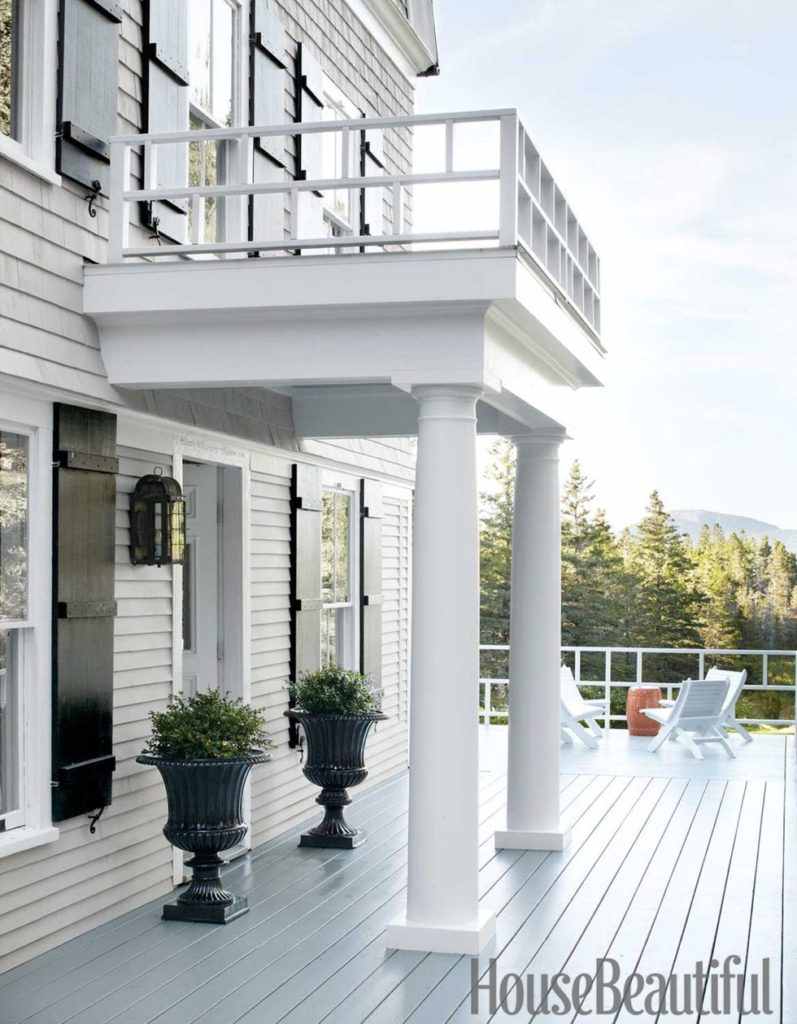 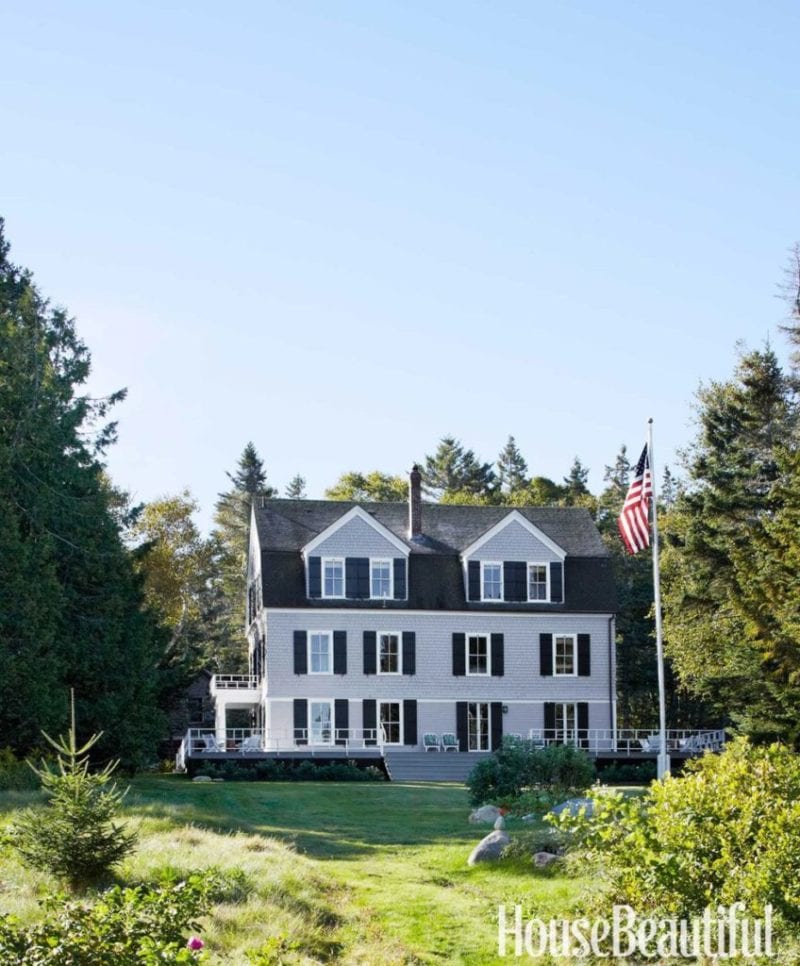 A restrained Shingle Style exterior belies the exuberance within. I am positively charmed by this remote New England home, originally built in 1905 as a hotel for “rusticators” from places like Boston and Philadelphia. To learn more, click here for an interview with the designers/owners.

Isn’t this the perfect summer getaway?! I am completely in love with the Independence Toile from Quadrille! So charming for an attic bedroom, and it would also be perfect as a tablecloth for a Fourth of July tablescape, or with with these throw pillows from Etsy. If you are looking to kick off your summer shopping, I have included a list of Memorial Day sales below.  But most importantly, today we remember in deep gratitude all the men and women who have given their lives for our great country. 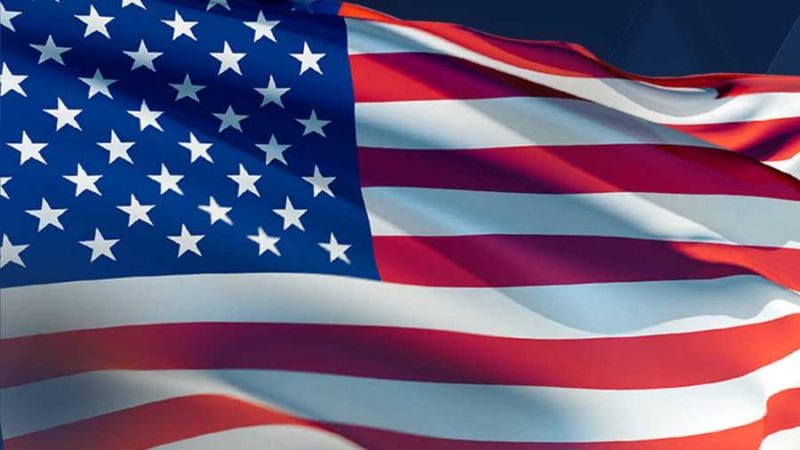 « Edith Wharton’s Newport Home is for Sale!
A Respectful Renovation in Atlanta »