Designed by legendary architect Addison Mizner, Casa Amado (Spanish for “beloved”) was built in 1919 for Charles Munn Jr., a social arbiter known as Mr. Palm Beach. When the current owners purchased Casa Amado in the early 2000s, it was in a state of disrepair and little of its original splendor remained. A third of the roof was gone, there was mold everywhere, the layout was problematic to modern living, the interior had already been gutted, and a fox the size of a German Shepherd had taken up residence.

Determined to bring Amado back to life, the owners hired contractor Joe Brennan to restore the the landmarked residence to its former glory, bringing it into the 21st century while preserving the mansion’s romantic exterior. Over the next few years, a plethora of drawings were implemented – led by Manhattan designer David Easton – to guide the renovation of the house and its grounds. Easton stripped the structure to its skeleton and created a series of what he calls “satisfyingly classical” rooms designed to meld the indoors with the outdoors facilitating a more relaxed flow appropriate for a vacation home. 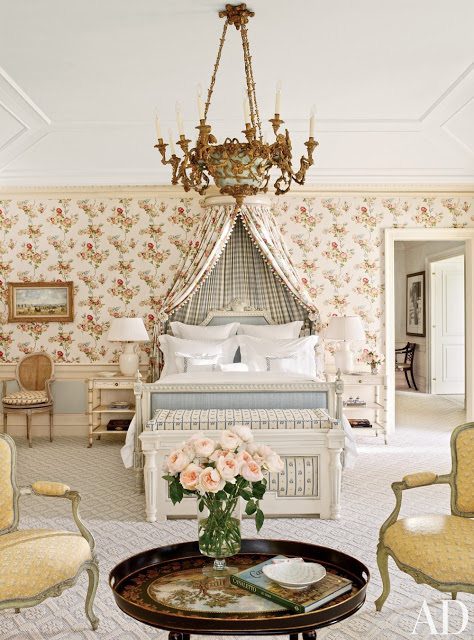 The master bedroom is punctuated by a circa-1790 Piedmontese chandelier from Scott Barnes Antiques; the carpeting is by Patterson Flynn Martin. 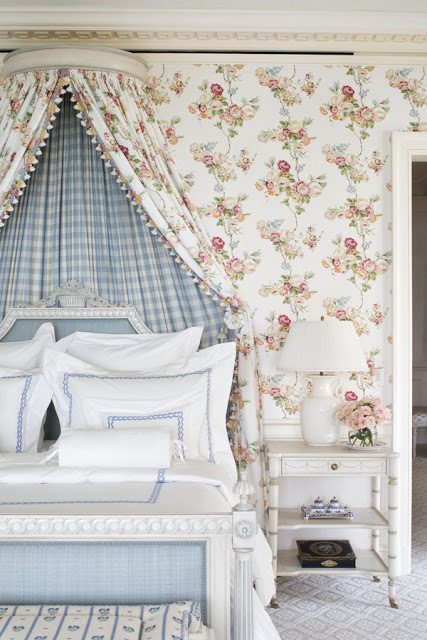 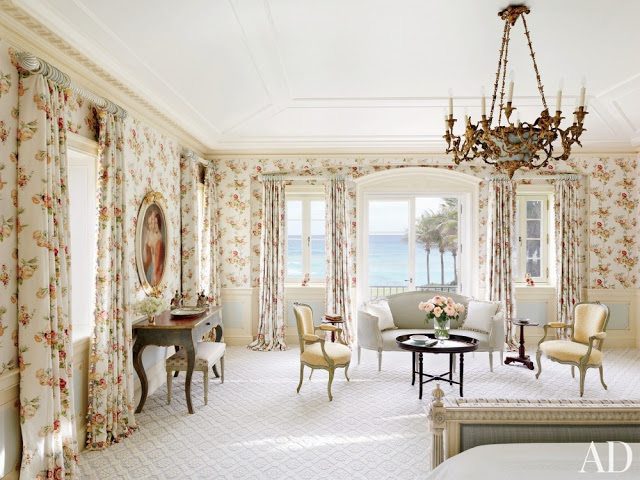 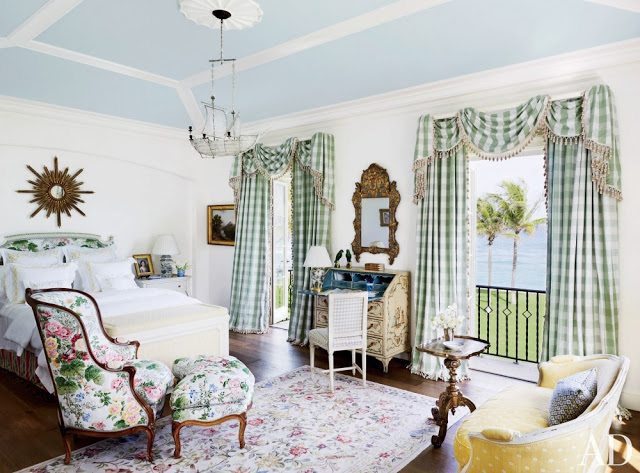 In a guest room, the headboard, armchair, and ottoman are upholstered in a Lee Jofa chintz; the sunburst mirror is from John Rosselli Antiques, and the curtain fabric is a Jane Churchill check. 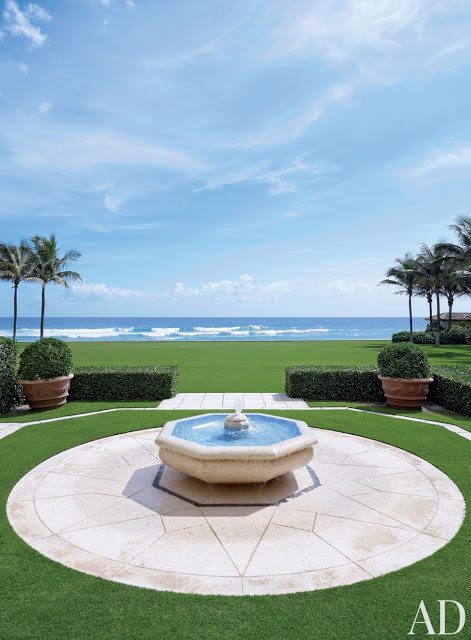 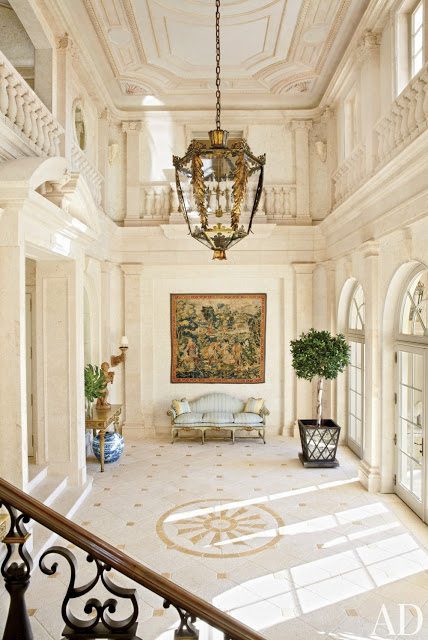 The sconce in the entry hall is by Formations, the tapestry is 16th-century Flemish, and the planter at right is by Dennis & Leen. 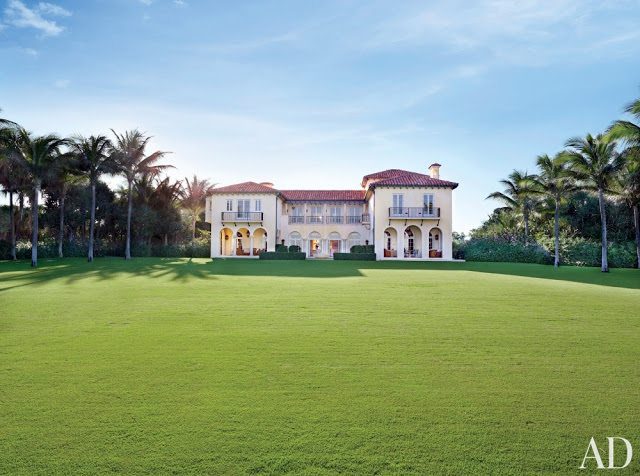 Amado’s oceanfront façade was restored nearly to its original appearance. 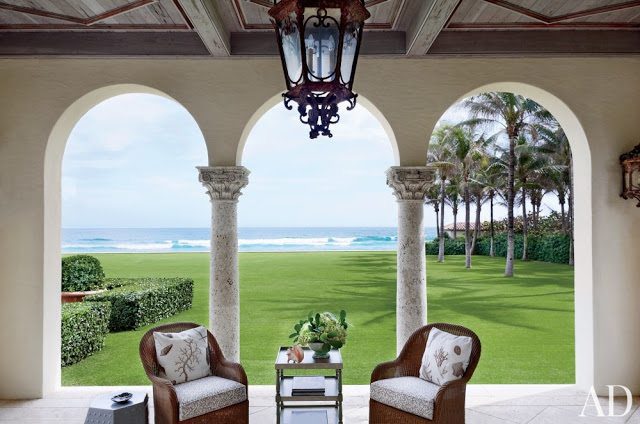 The library loggia is furnished with chairs cushioned in Clarence House fabrics. 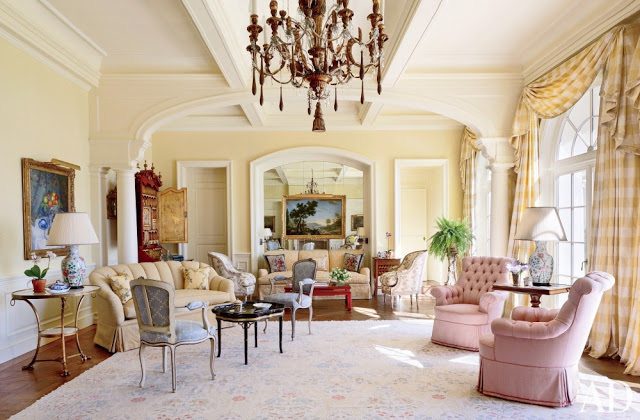 Sofas upholstered in fabrics by Cowtan & Tout (left) and Lee Jofa stand in the living room amid antique accents; the circa-1880 Louis XVI–style bergères are clad in an Old World Weavers floral. 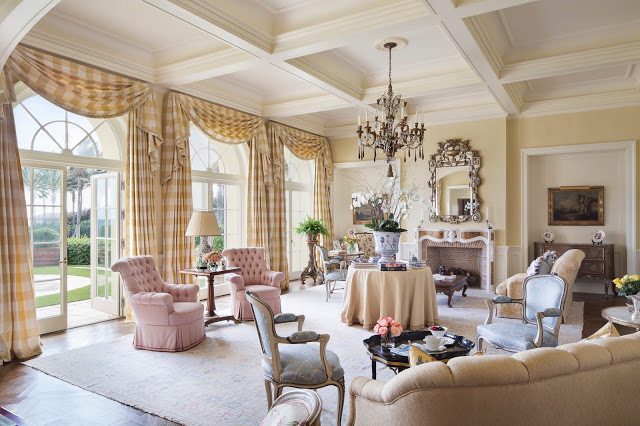 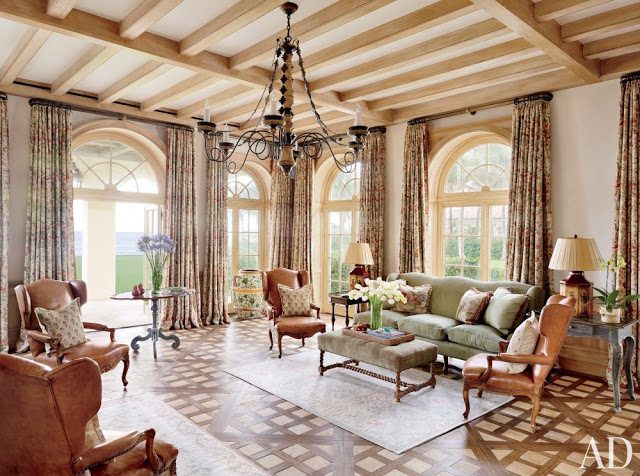 In the family room, a Formations chandelier joins curtains made of a Lee Jofa print. 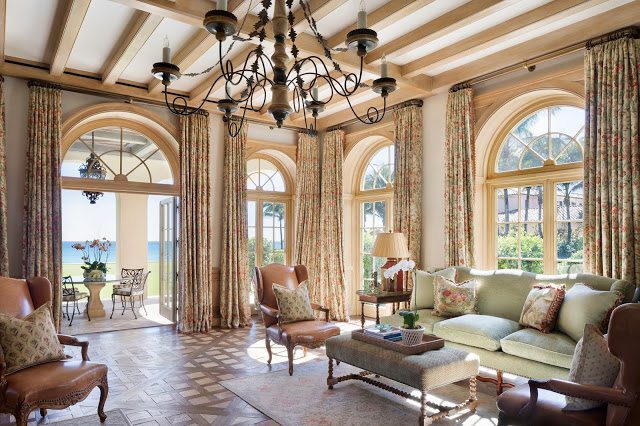 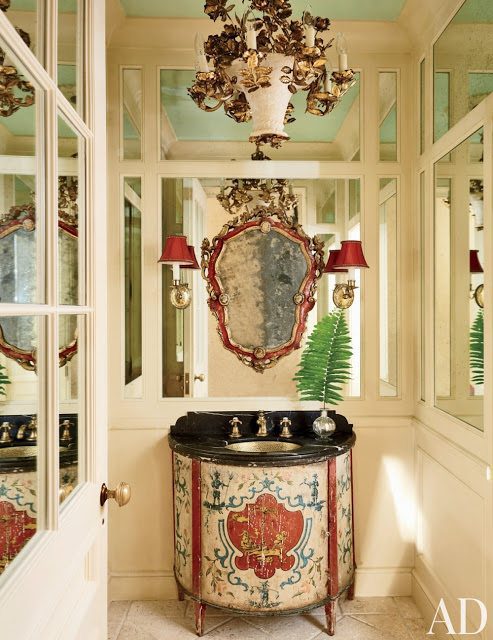 The powder room features an Italian mirror crafted around 1760, a circa-1870 Florentine commode transformed into a vanity, and Waterworks sink fittings. 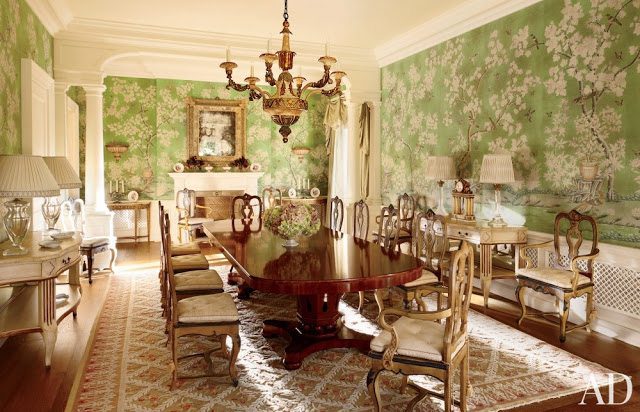 A Gracie chinoiserie paper lines the dining room, which is outfitted with Italian Rococo chairs and custom-made copies; Frederick P. Victoria & Son created the cream-painted consoles, and the carpet is a bespoke Axminster. 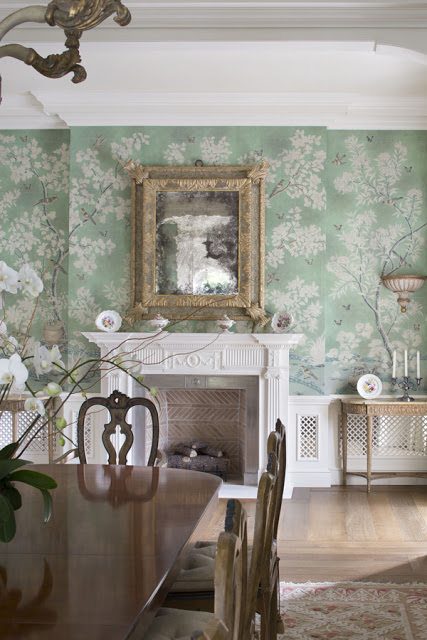 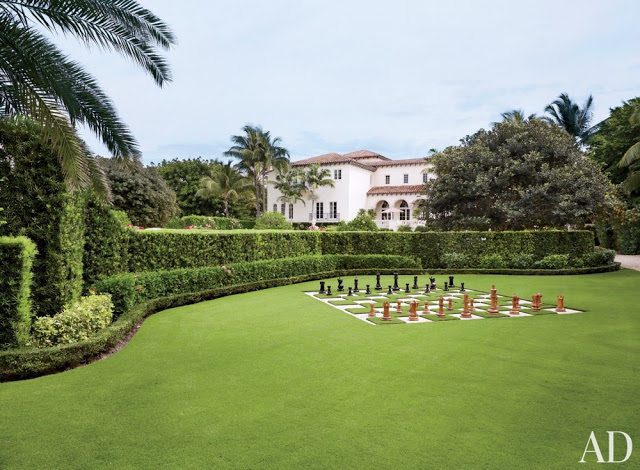 A stone chess set occupies a patch of lawn. 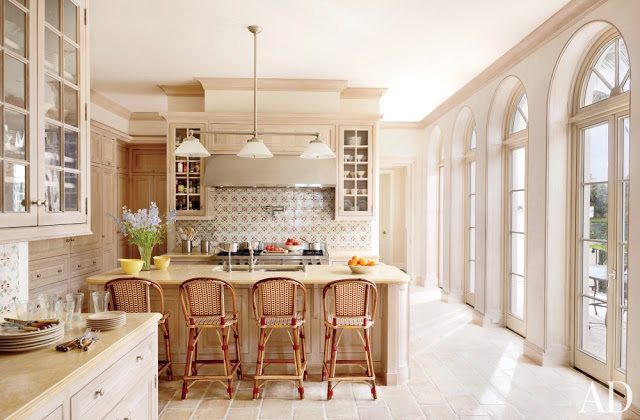 An Ann-Morris ceiling fixture hangs above the kitchen island; tile from Solar Antique Tiles distinguishes the backsplash, and the barstools are from TK Collections. 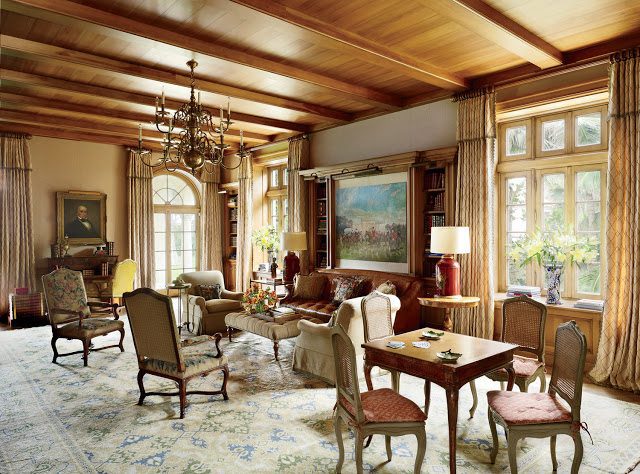 In the library, the games table in the foreground is Italian Rococo. 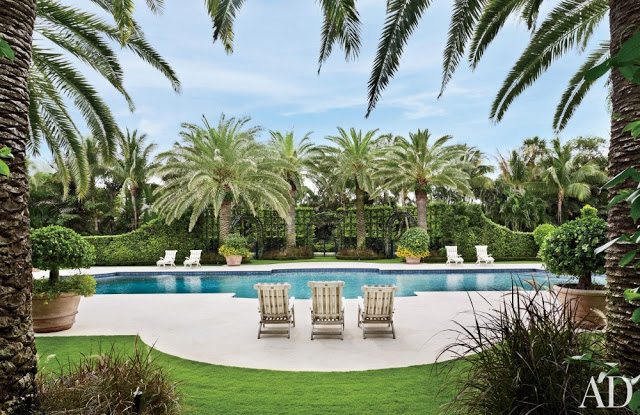 Hedges and trelliswork blanketed with jasmine border the pool area. 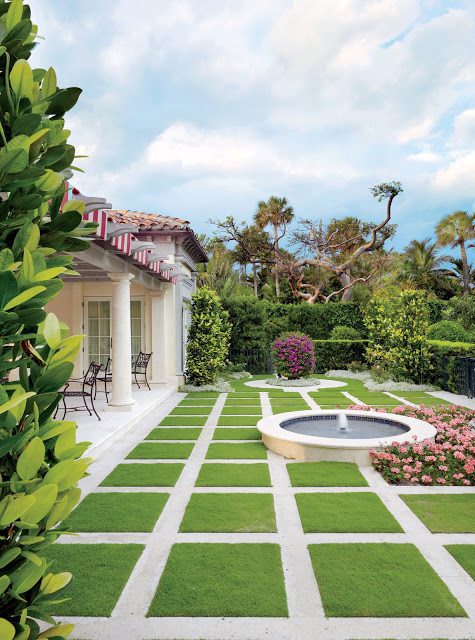 A stone fountain anchors the tennis pavilion’s terrace.
It always delights me to see such an important historic home brought back to life and saved from the all-too-prevalent wrecking ball. Thanks to the collaboration of some very talented individuals, this home has been given another 100 years of life. Additional information and before images documenting the restoration can be found through Architectural Digest. You can learn more about Casa Amado, and other iconic Palm Beach homes, in the book Palm Beach Chic.