My dear friend Bettie Bearden Pardee from Private Newport has published a delightful article in Town & Country. She features Nick Mele, an incredibly talented society photographer who grew up in Edith Wharton’s former oceanfront home, Land’s End.  His grandmother is a legendary Washington, D.C., hostess and Newport society fixture, and Nick continues to find inspiration through family heirlooms, customs, and rituals. “Newport is a town that refuses to forget its history and traditions,” Nick said. Through their Instagram account, @a.social.life, Nick and his wife Molly showcase Newport’s unique charm, which Bettie has captured and shared with Town & Country.  Let’s take a look inside Land’s End with photography by Nick Mele and text by Bettie Bearden Pardee, as published in Town & Country… 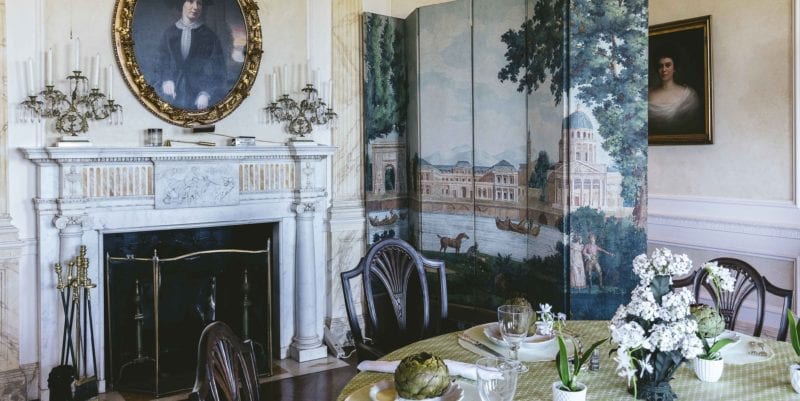 “You couldn’t collect in a lifetime what has been passed down through three to four generations,” Nick says. 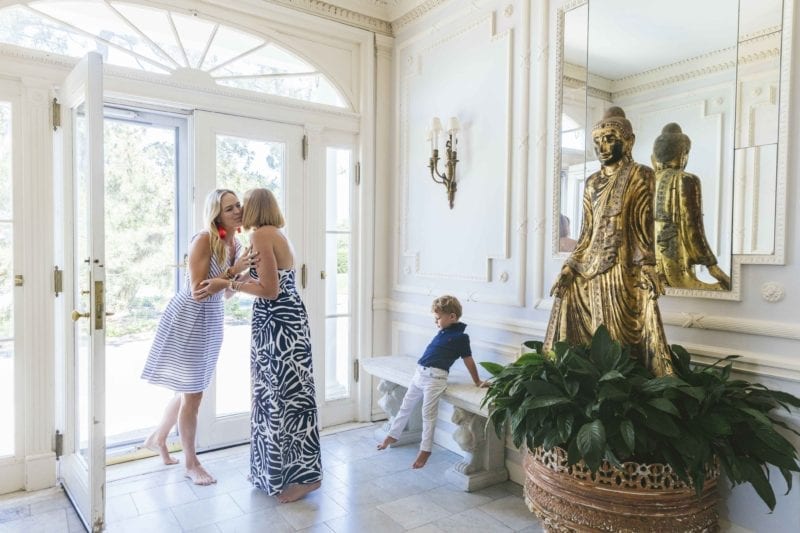 You never know who, or what, might greet you in a Newport home. Here, designer Camilla Bradley kisses Molly Mele on the cheek. 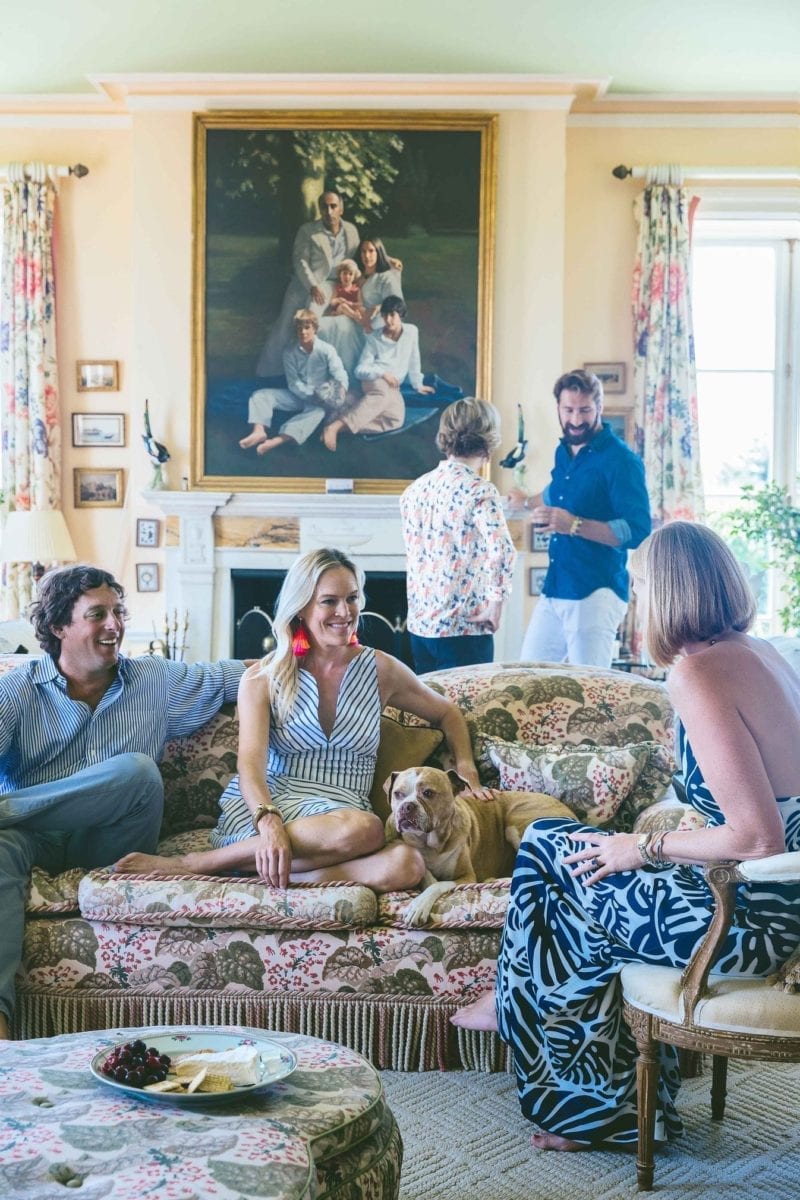 With buttercream walls, chintz and portraits on the wall, this room has said “family home” for more than a generation. 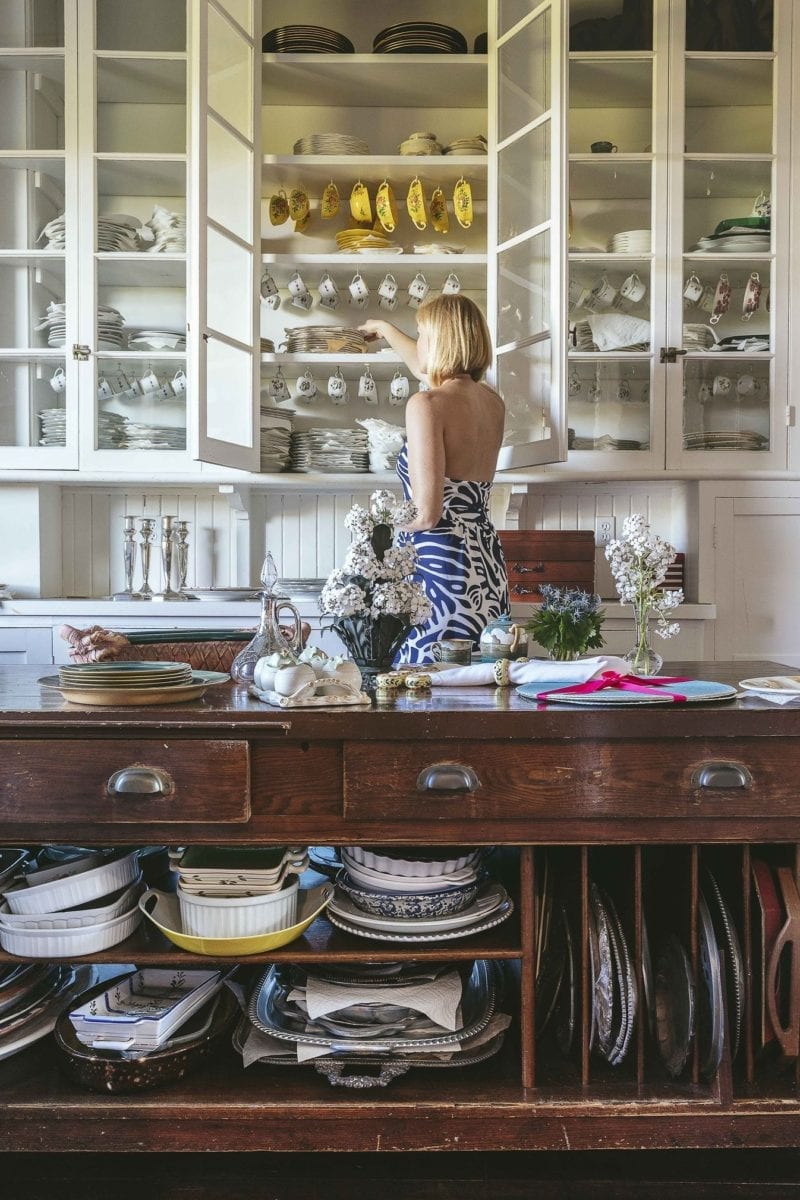 Nick was intrigued with his grandmother and what made her a great hostess, though he, “didn’t appreciate until [he] was older that it is details that make up the grander scheme.” Finger bowls hold an attraction for him, and Herend china is taken often from the butler’s pantry.

Yes, it’s a casual lunch of pasta and salad but that still provides Nick and Molly an opportunity to bring out the silver salt and pepper shakers, the oil and vinegar cruet, and an antique tole flower container. 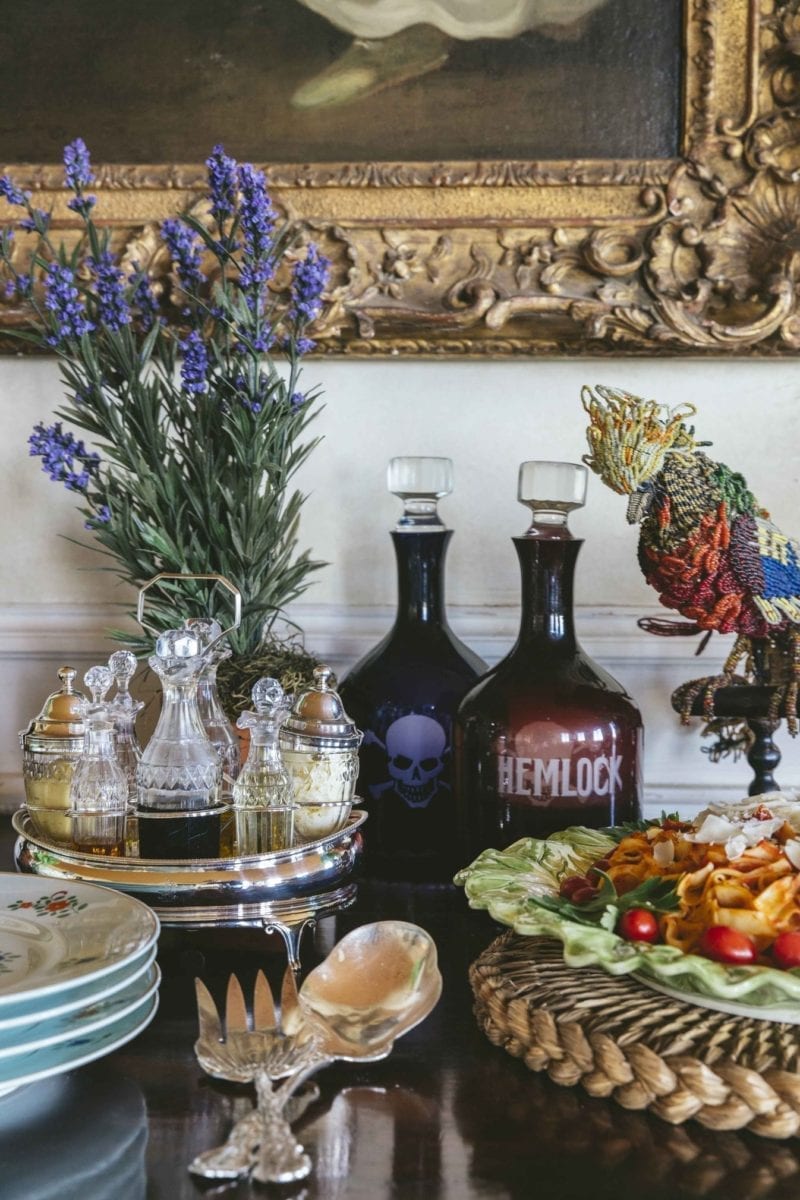 What’s a luncheon in Newport without a decanter of arsenic and hemlock? 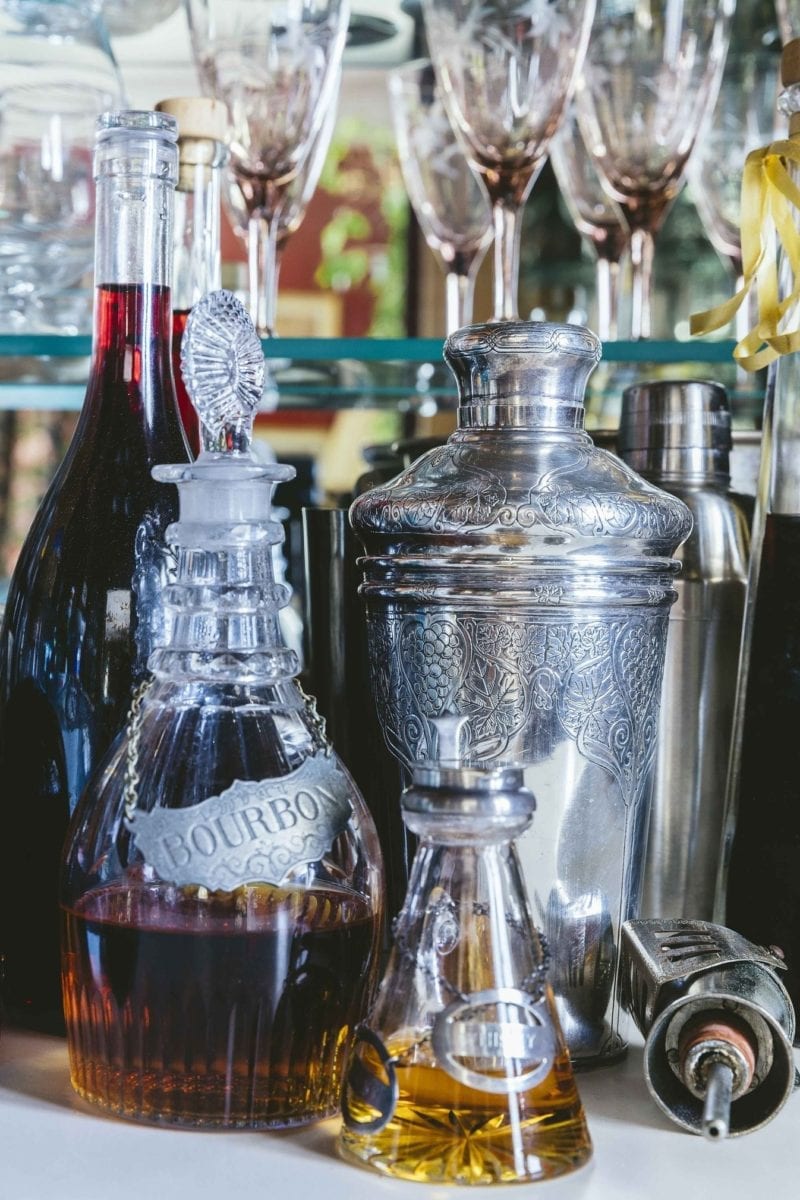 That staple of a good party is narrow but efficient, located off the entry hall and opening into the billiard room and onto the pool. 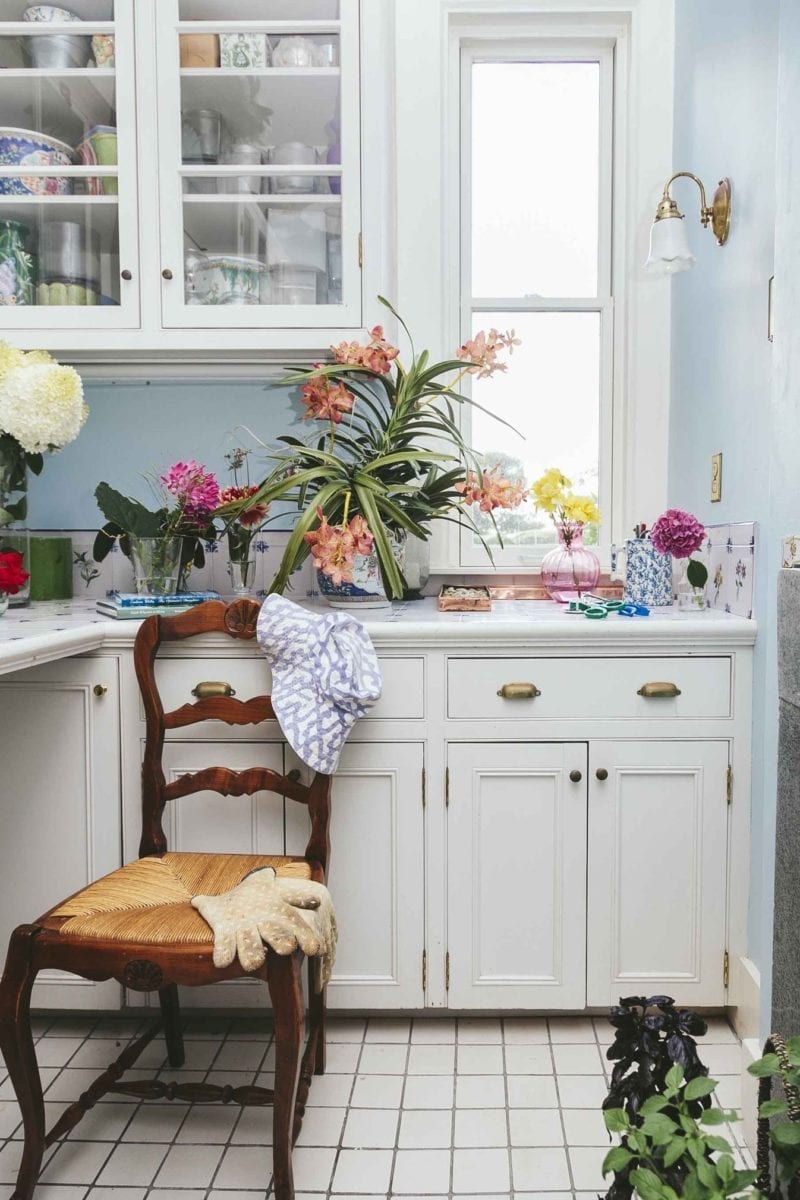 Cuttings from the garden are arranged here for parties. 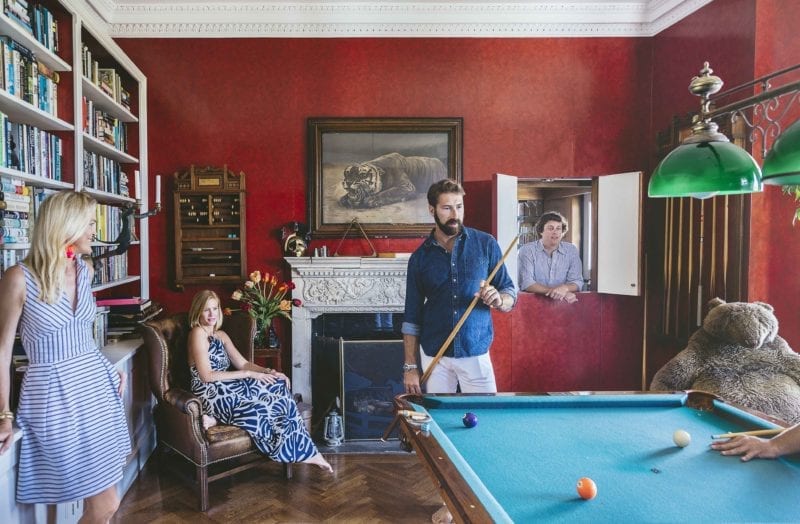 Land’s End is not afraid of bold walls. 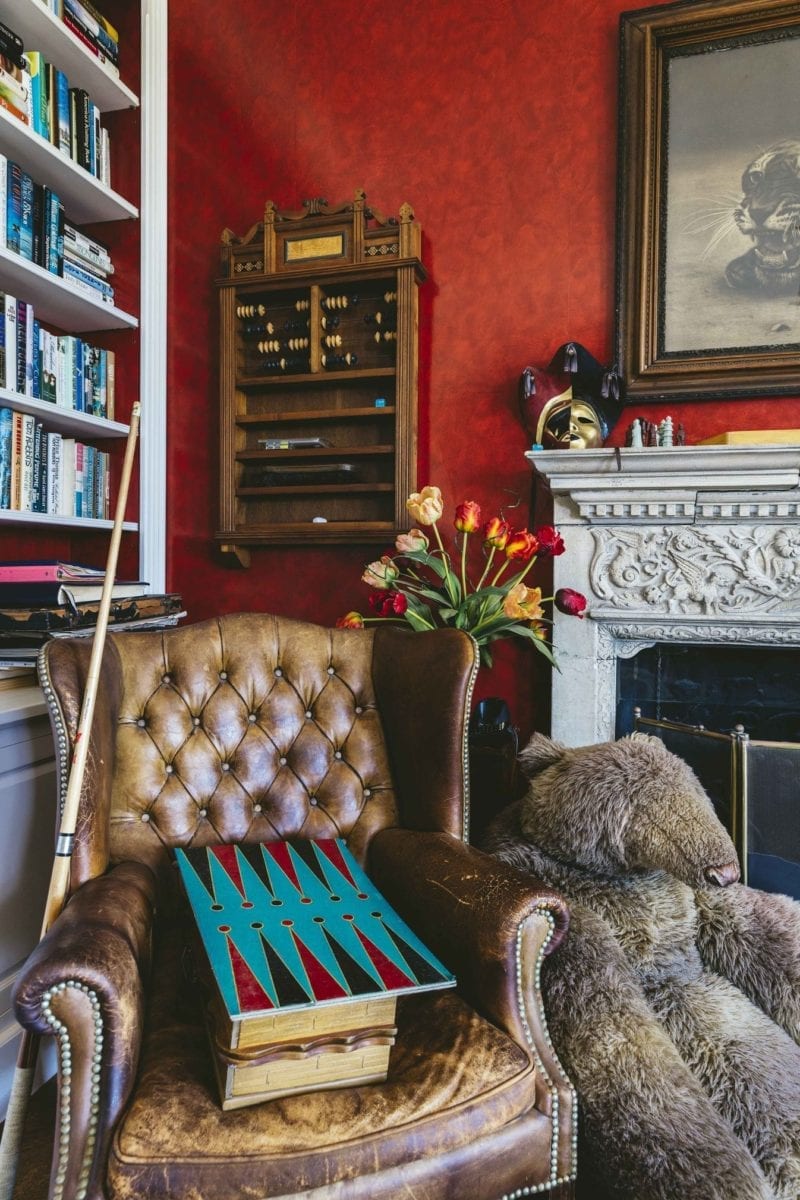 Nick spent many nights as a teen playing billiards, chess, and backgammon in this room with friends. 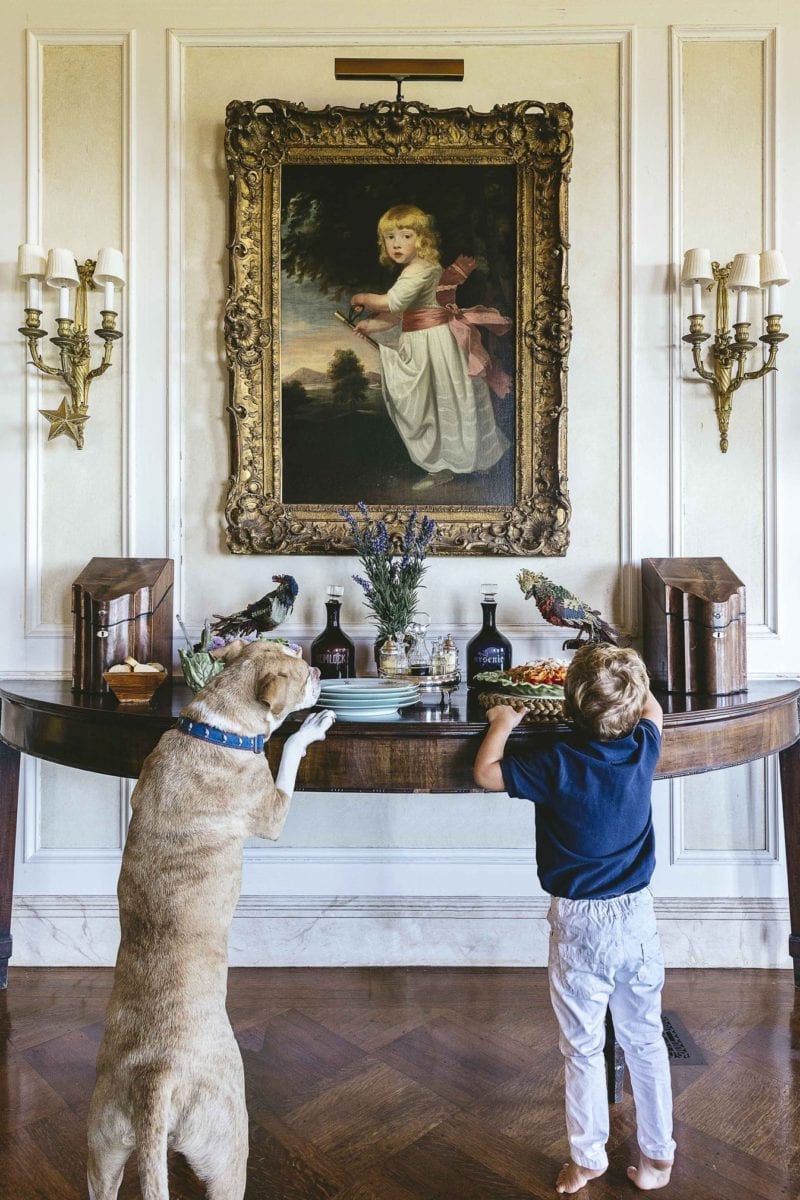 In a town of tradition, family is obviously important. For Nick, it’s never too soon to introduce his son Johnny to the world of good manners, “even if it’s a tough sell sometimes.” 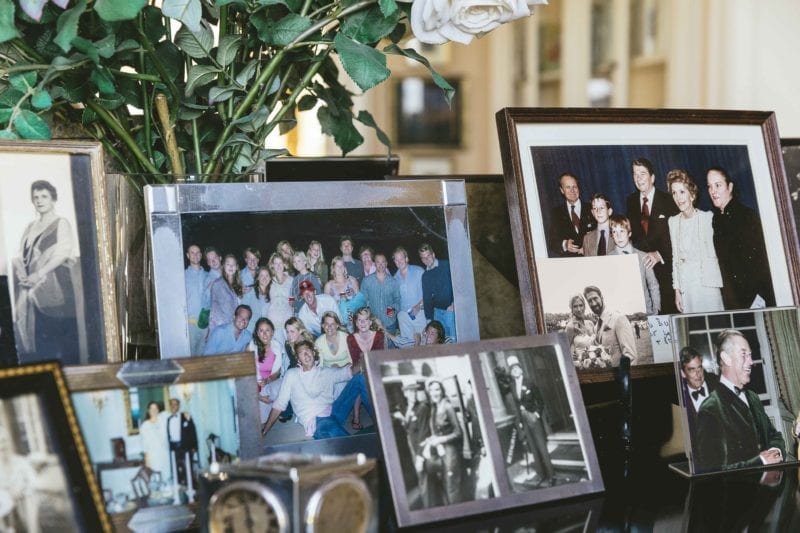 The requisite piano photos display “Newport moments in time,” from Nick’s annual Fourth of July party to a long list of bold names including the Reagans. 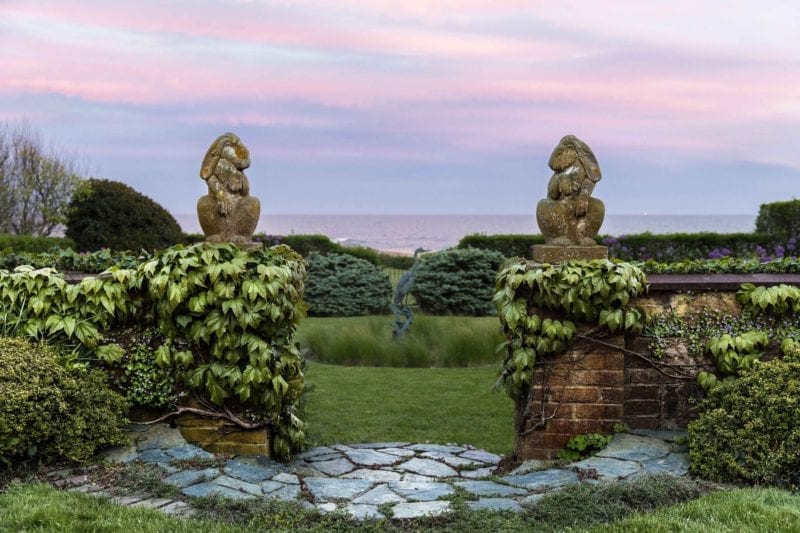 Overlooking the Cliff Walk, the garden at Land’s End was sited on space that once belonged to the greenhouse. 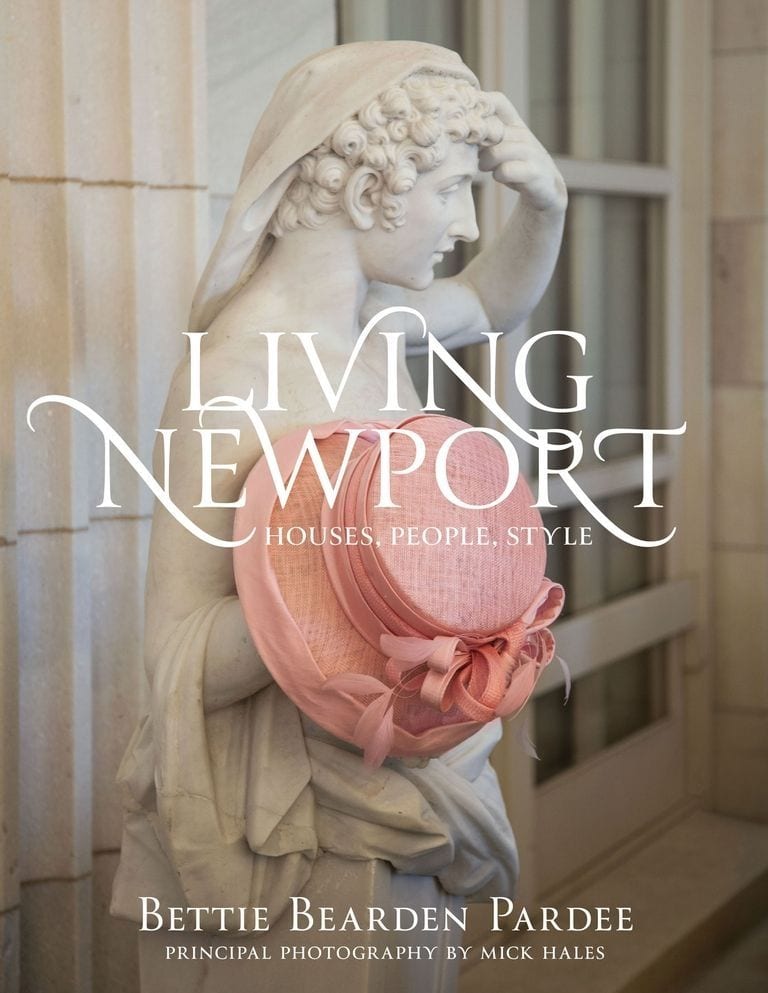 With a background that has focused on the essence of style in the richly diverse lives of tastemakers, Bettie Bearden Pardee illuminates the private side of her fabled town on her luxury lifestyle blog, PrivateNewport.com, in her two books Living Newport: Houses, People, Style (2014) and Private Newport; At Home and in the Garden (2004), and on her Instagram, @PrivateNewport. She’s also the designer of the Parterre Bench, named after her home on Bellevue Avenue. As a Bon Appétit contributing editor for eleven years, she produced the feature “Entertaining with Style.” An honoree for the second year on “The Salonniere 100: America’s Best Party Hosts,” she was also the host and creative producer of the PBS series, “The Presidential Palate: Entertaining at the White House.”

Nick Mele has appeared in the New York Times, Town & Country, and Vanity Fair.  You can follow him on Instagram via @a.social.life and @nickmelephotography.  I cannot get enough of his modern-day Slim Aarons style! Stay tuned, as I will be featuring more of Nick’s work along with a Q&A very soon. And to read my past posts on Bettie, please click here, here, and here.