Today we are touring a magnificent Italianate house located on Charleston’s illustrious South Battery with panoramic views of Charleston Harbor. The 9,000 square foot mansion was built in 1895 by Frederick Dinkelberg – the architect of the Flatiron Building in New York – for Cornelia “Daisy” Breaux Simonds, a flamboyant New Orleans beauty, and her husband Andrew Simonds Jr., a Charleston bank president.

“It was built as a wedding gift, but my guess is that Daisy was very involved. From everything we read, she was a very big personality,” said E.E. Fava, the Charleston architect whose firm, along with the home’s owners, Stephen and Mary Hammond, was pivotal in restoring the house. Sadly, Daisy was widowed in 1902, and not long after, she built an addition across the back and opened the house as a hotel named Villa Margherita. (Margherita means “daisy” in Italian.) The hotel operated into the 1950s, and hosted United States presidents, including Theodore Roosevelt, and some of the cast of Gone With the Wind. By 1953, Daisy had sold the house and it was returned to a single-family residence. After changing owners one more time, the house remained with the same family for several decades. “It obviously has a big presence in Charleston, and we loved the idea of bringing it back to its original condition and making it a family home,” said Mary. 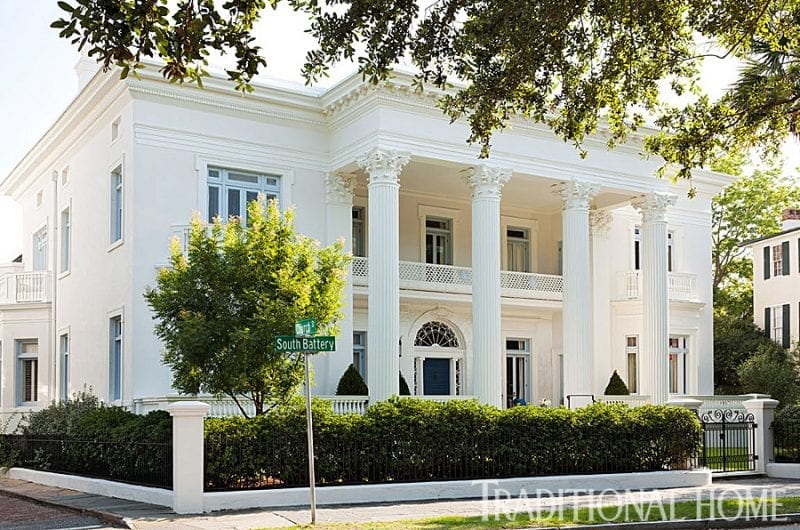 In departure from the typical “Charleston single house,” this Italian villa-inspired home was inspired by Andrew and Daisy Simonds’ world travels with 33-foot-high fluted Corinthian columns on the front terrace, a second-level cast-iron Florentine balcony, an enormous ballroom with a monitor skylight, and a fireplace adorned with plaster cherubs and caryatids. 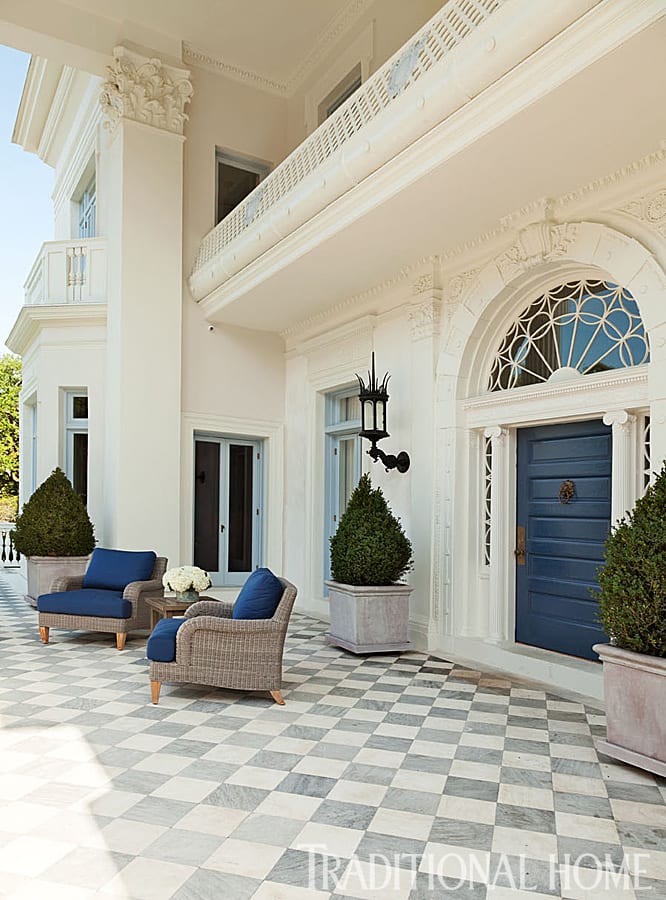 Deteriorated column capitals were reproduced by artisans in Savannah, Georgia, and gas lanterns by the front door were painstakingly refurbished and replumbed for gas. Exterior porch balusters were faithfully reproduced out of mahogany, the most stable wood for the humid climate. “There weren’t many balusters left. We found a few stray ones in the basement,” Fava says. The entire exterior was re-stuccoed and painted. 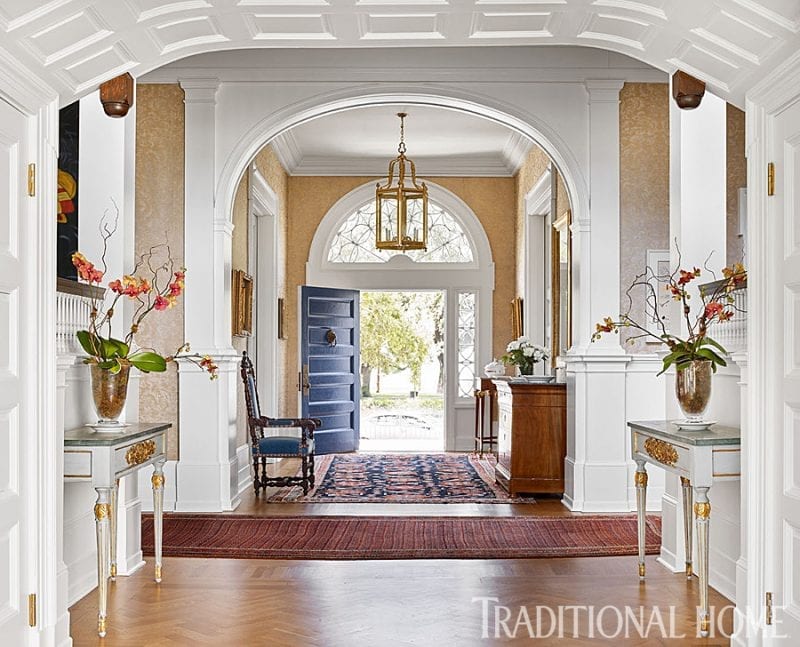 A spacious center hall allows for breezes and sight lines through the house, from the front door out to the back bluestone patio. An early-18th-century Louis XIII armchair is a family heirloom. 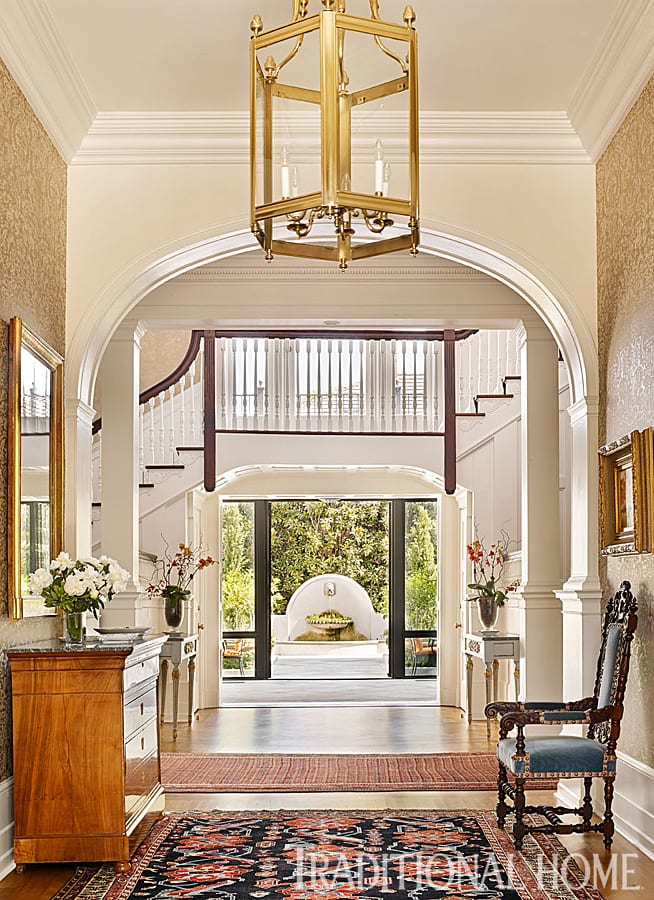 The grand foyer extends straight to the back courtyard. 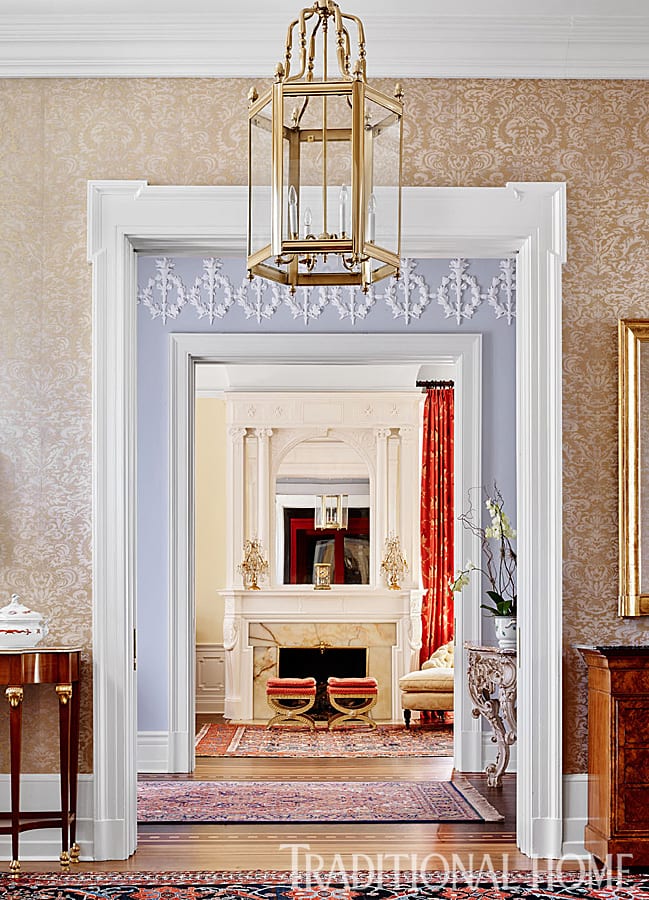 An ornamental frieze embellishes the upper walls of an anteroom that links the foyer and the living room. Walls in the anteroom are painted Sherwin-Williams “Misty” blue, which accents the white frieze and wide door moldings. Two antique stools are upholstered in “Rondo” from Scalamandré. 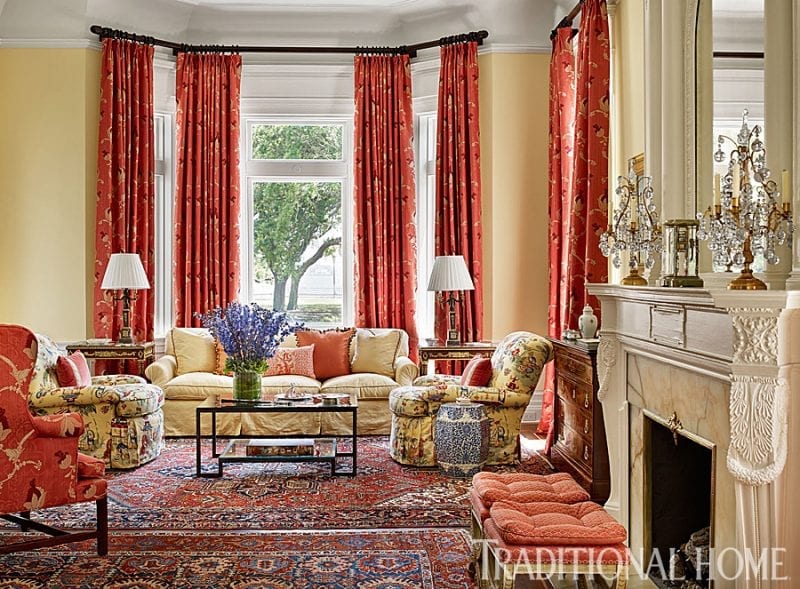 Miles of Scalamandré’s “Vivaldi” fabric were fashioned into draperies for the 10-foot-tall original windows. Late-18th-century candelabras on the mantel are family antiques. Armchairs are upholstered in an Asian-inspired linen and cotton print from Brunschwig & Fils. 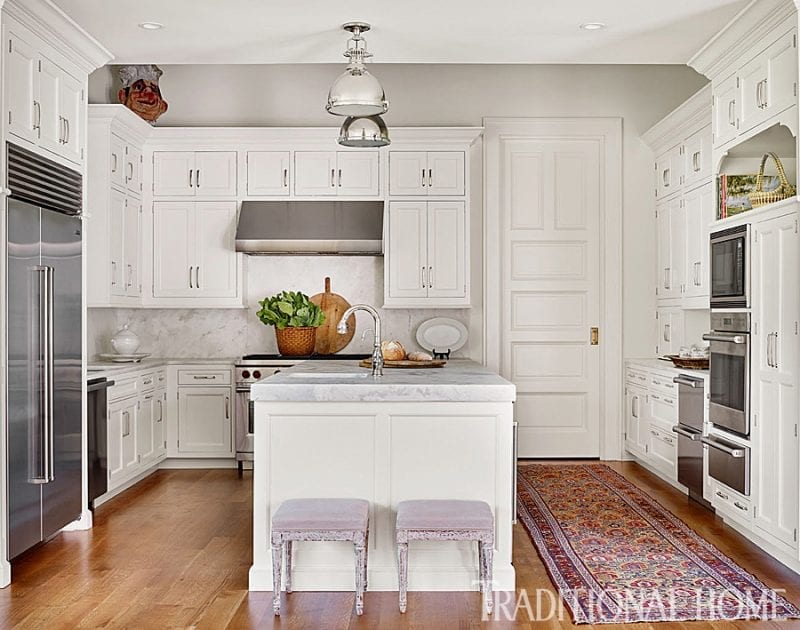 “While the house did need a lot of work, it had not had a lot of alterations from when it was originally built,” Mary says. “The only area where we changed the footprint was the kitchen and family room to make it a more modern, open plan.” 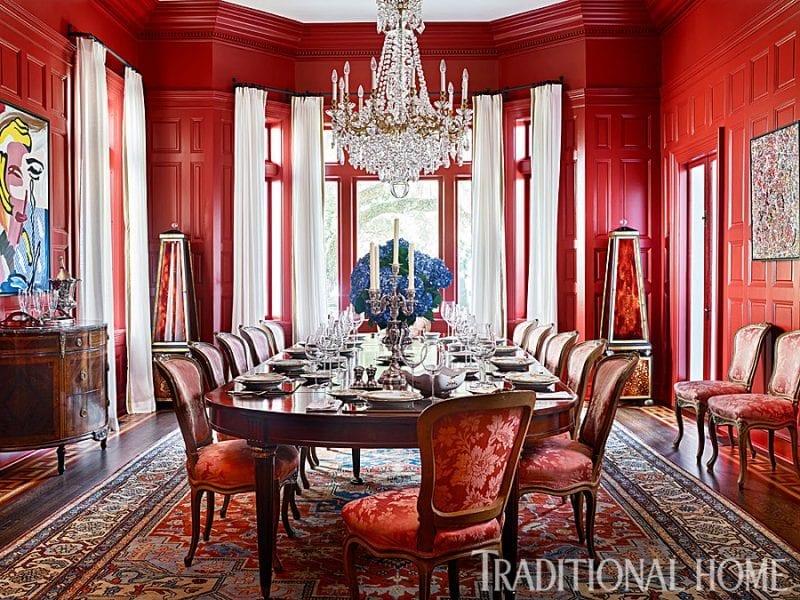 As the renovation was under way, Stephen and Mary shopped for furnishings at antiques shops, auctions, and estate sales.
Paneled walls and trim painted with a high-gloss red enamel set a dramatic backdrop for formal dining. An antique Baccarat crystal and bronze d’ore 10-light chandelier and French Empire mahogany table were purchased in New Orleans. The dining chairs are from the estate of Marjorie Merriweather Post. 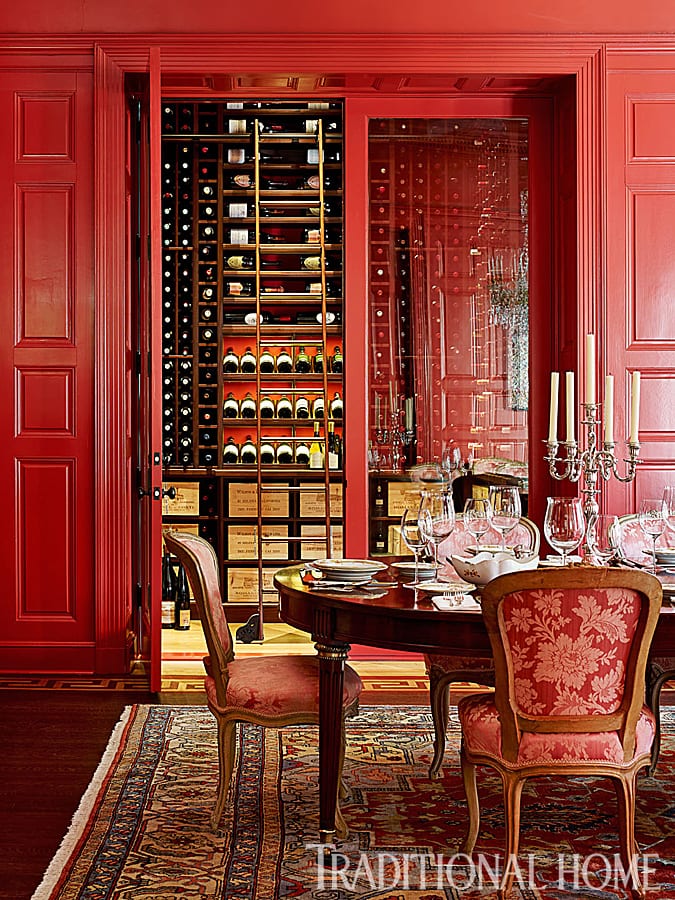 A utility room adjacent to the dining room was converted into a temperature- and humidity-controlled storage space for wine. 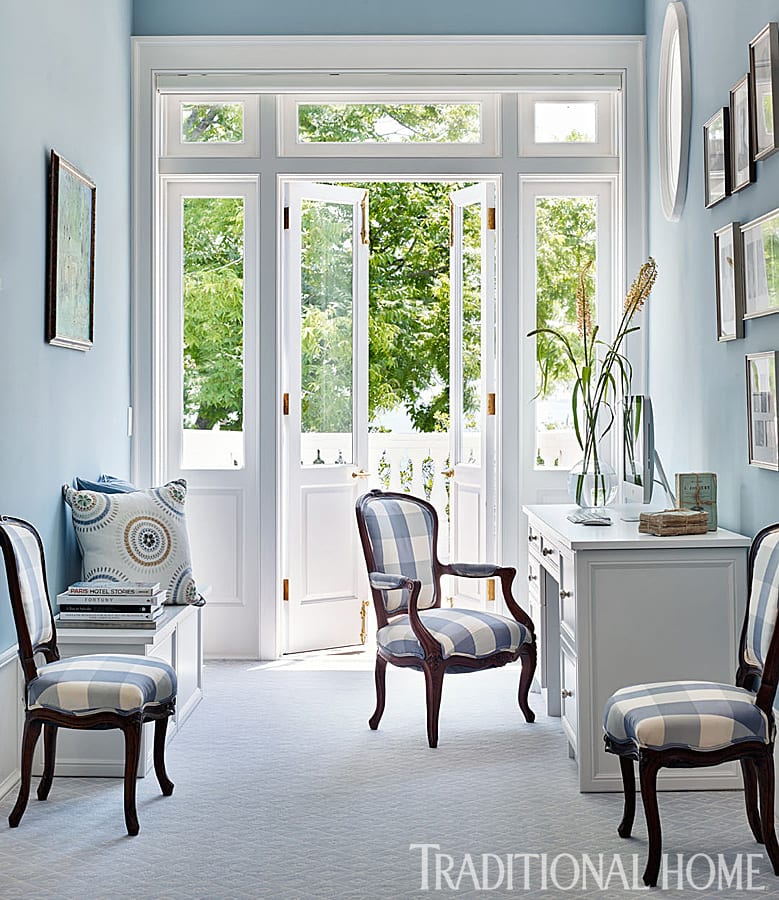 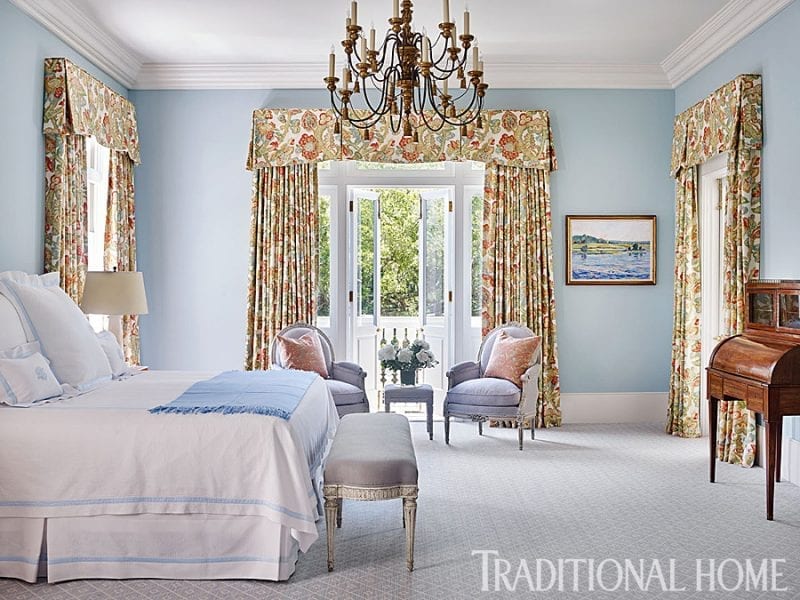 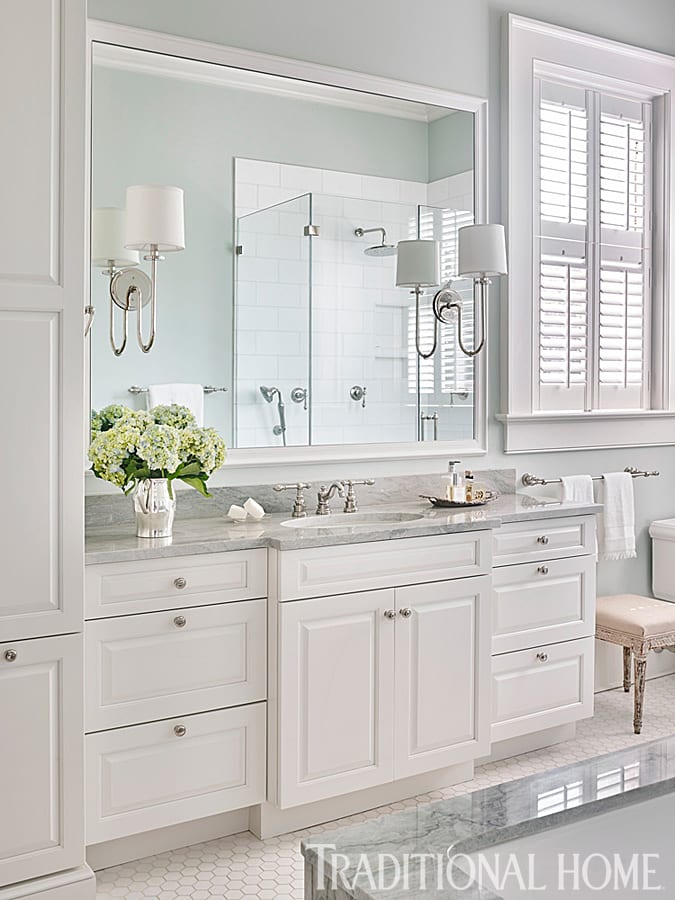 A hint of color on the pristine bathroom’s walls coordinates with the marbling in the tub and countertop. 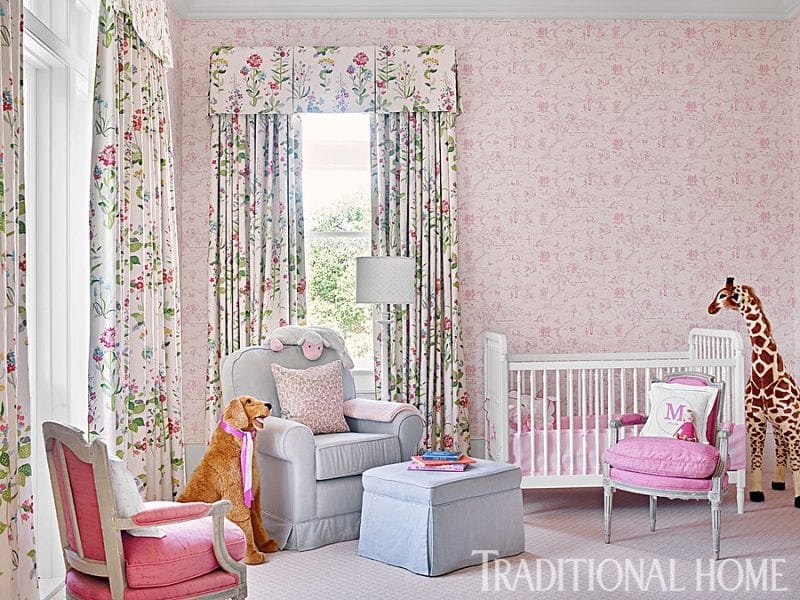 Pink-and-green floral draperies add a touch of elegance to the sweet space for the little girl. 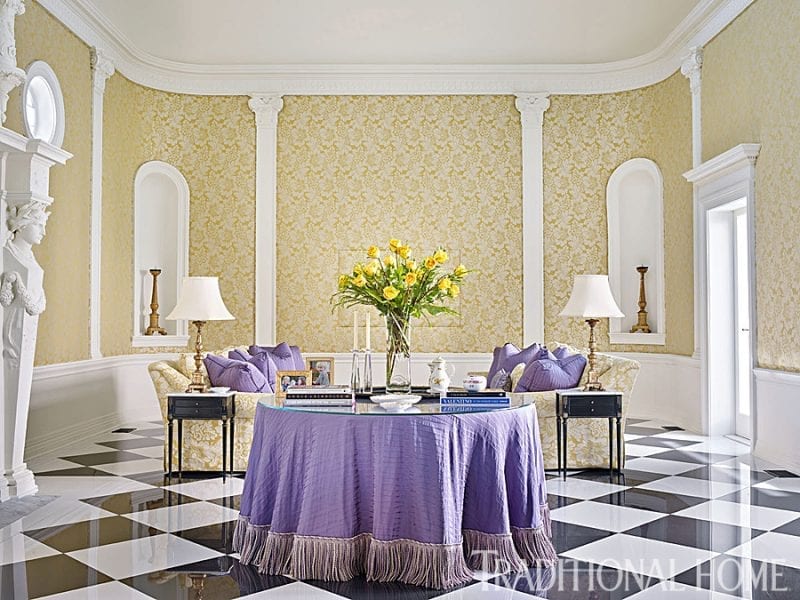 The couple wanted the ballroom more accessible to the kitchen and family room to ensure the room would actually be used. “At this stage in our lives we’re not having dances and balls every day, so we put two big couches and a TV there and made a nice sitting area that we really use,” said Mary. Stephen uses the room as his “man cave” on football Sundays, and when the Hammonds entertain large groups, the room can accommodate several large round tables. Two large sofas and a large TV concealed behind doors (upholstered to match the walls) turn the room into a family gathering spot. 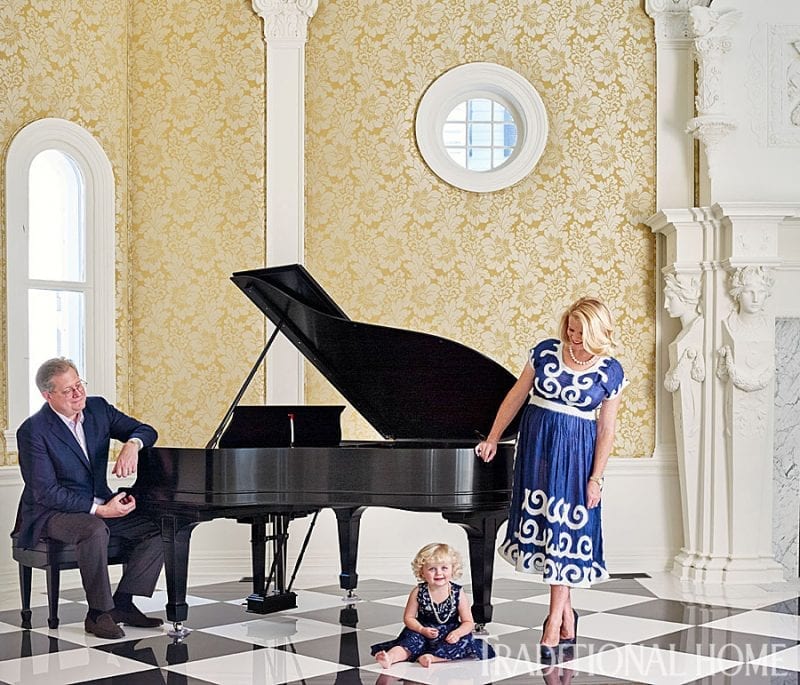 Homeowners Stephen and Mary Hammond with daughter, Marilen. The walls are upholstered in a pale yellow damask fabric from Lee Jofa. The ornate fireplace was cleaned using dental pick-like tools to remove layers of grime and paint. 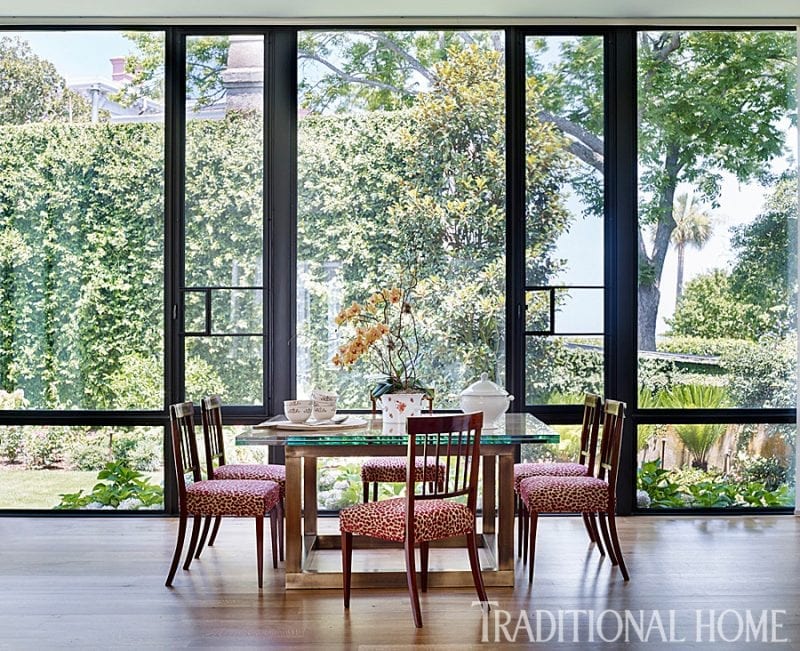 The Hammonds added two glassed-in spaces. One is a breakfast room near the kitchen with views to the side yard and harbor beyond. The other is a corridor across the back that links the kitchen with the ballroom. 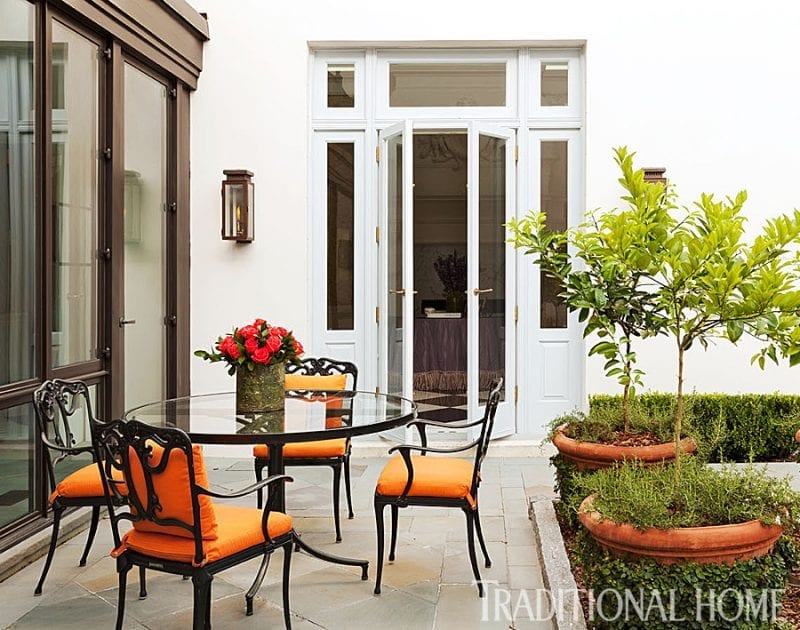 A straight shot back from the front door, and right off the breakfast room and ballroom, lies the majestic courtyard. 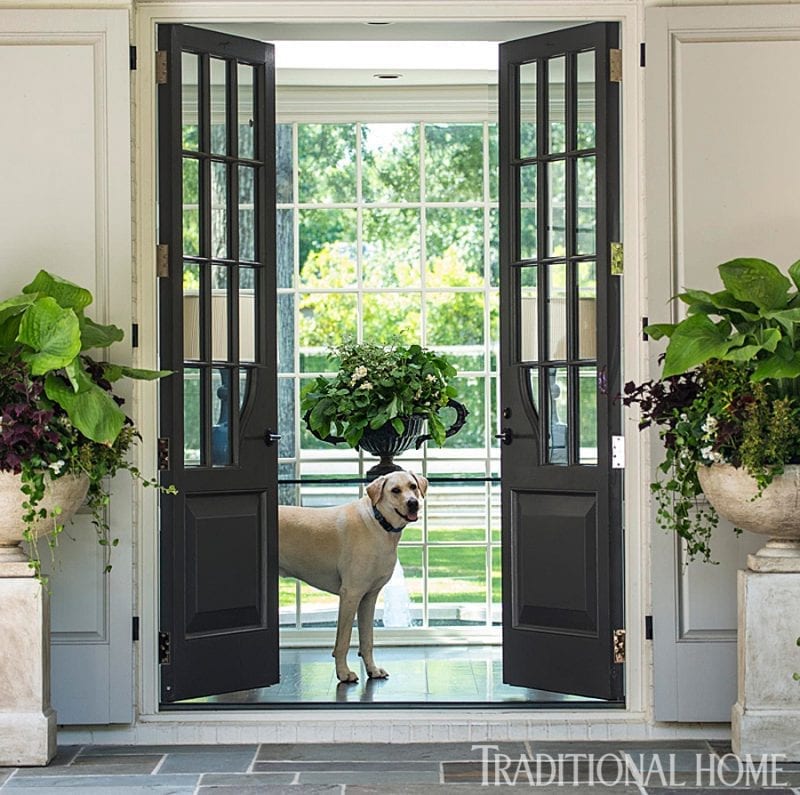 The spacious rooms, while elegant, are still family friendly, Mary says, and daughter Marilen loves playing everywhere, including riding her trike down the bluestone-paved glass corridor.

“The level to which the Hammonds allowed us to go with restoration and renovation was so important,” Fava said. “This wasn’t just a Band-Aid. They wanted to make the house right.”

To see more, please visit Traditional Home. This home was originally featured in the October 2015 issue.