The March issue of Architectural Digest includes a beautiful tribute to design legend Mario Buatta with the feature of his last project, a glamorous New York duplex he designed for beloved repeat clients.  It was written by Emily Evans Eerdmans, the exceptionally talented writer who authored Mario Buatta: Fifty Years of American Interior Decoration (aka the “Buattapedia) and became one of Mario’s dearest friends.  Emily notes the duplex contains quintessentially Buatta elements such as inviting seating, drapery with dressmaker details, a glorious rainbow of color, touches of chinoiserie fantasy, and occasional bursts of chintz. But there are surprises, too she says. “A mod planetary chandelier centers the blush-pink dining room, which is further loosened up with blue-and-white Indian batik–slipcovered chairs and paisley-embroidered curtains. The entrance hall’s silvered grass cloth and an African motif–inspired printed burlap in a dressing room both also lie outside the expected Buatta canon.”

The building was built in 1931, which inspired Mario to incorporate a touch of the jazz age within his design. A passionate historian, Mario was a scholar up until the very end. “When not able to access his own library, he would dispatch me to the New York School of Interior Design to bring back books on the Art Deco style for him to study,” said Emily.  Remarkably, much of this project was completed from his hospital room which he turned into “command central, surrounded by mini-mountains of alluring wallpaper and fabric swatches.” Via Instagram, Emily says Mario was literally making decisions while being wheeled into surgery. He never lost his masterful vision nor his uncompromising drive for creating beauty. 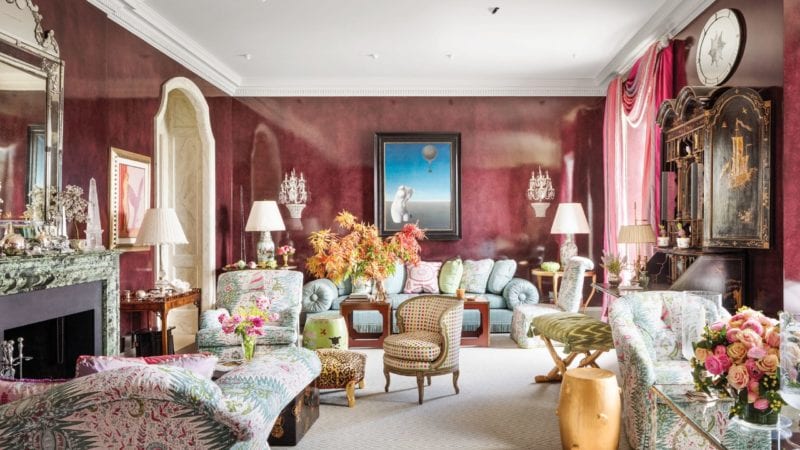 Aubergine glazed walls wrap the living room. Custom seating by De Angelis in a Quadrille print. The owners’ extensive collection of artworks by René Magritte is displayed throughout the apartment. 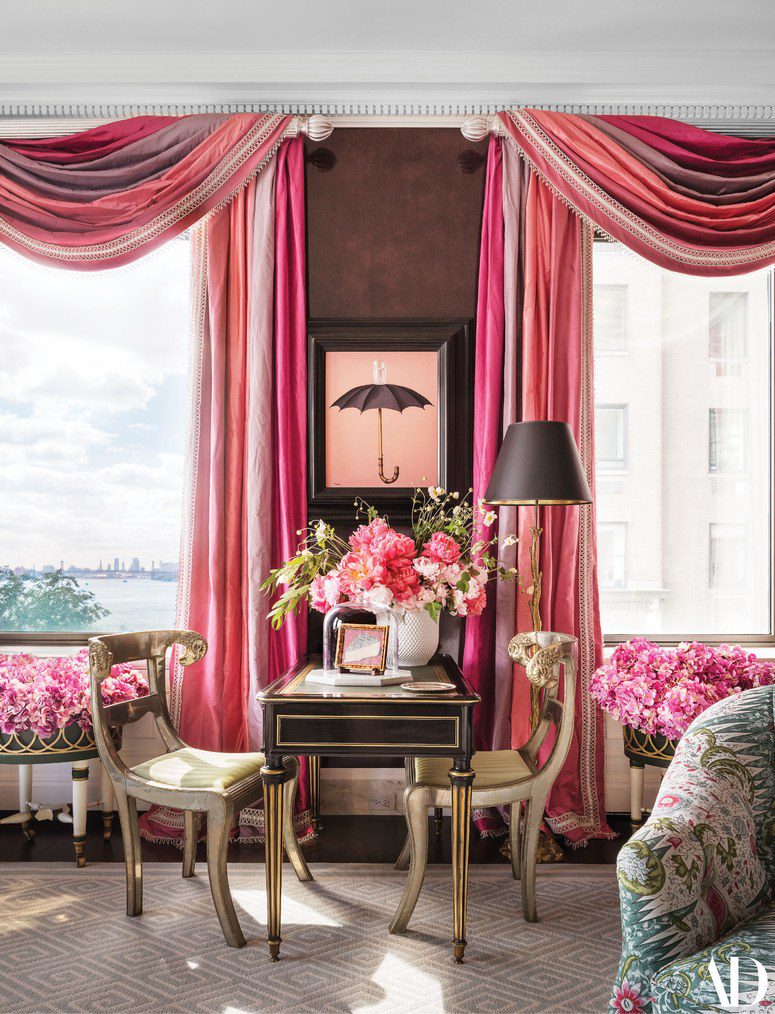 Three different silks, two by Kravet and one by Brunschwig & Fils, make up the living room curtains. 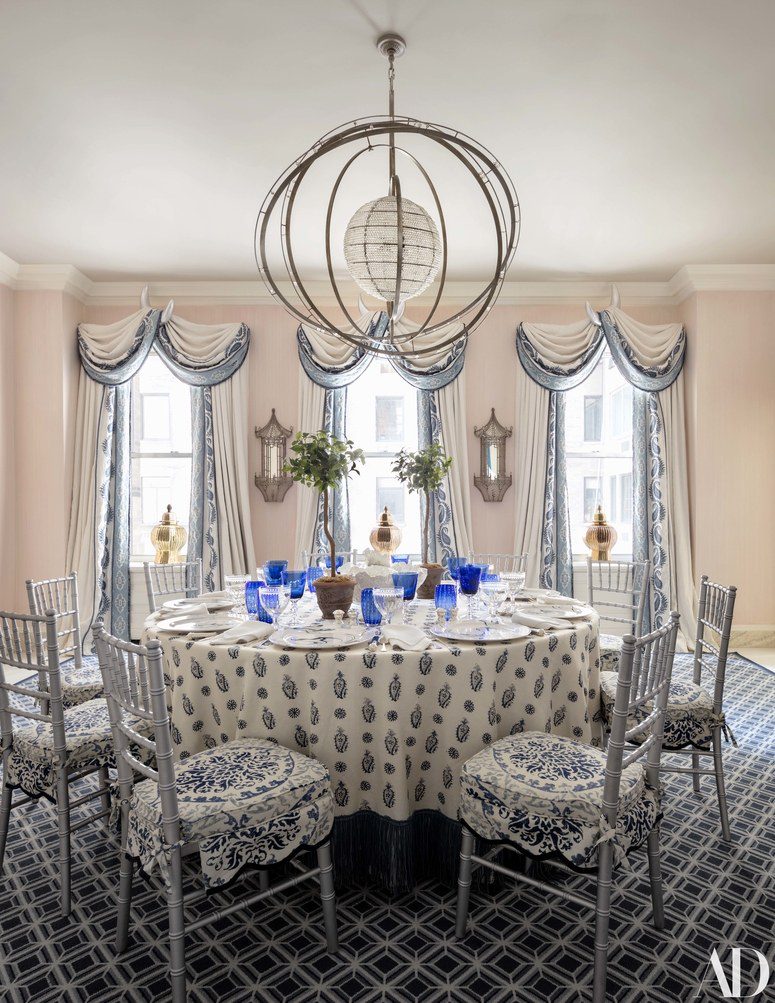 In the dining room, a hanging light from John Rosselli illuminates a table draped in a Brunschwig & Fils fabric. Curtains of a Lee Jofa linen; sconces from Liz O’Brien; rug by Stark. 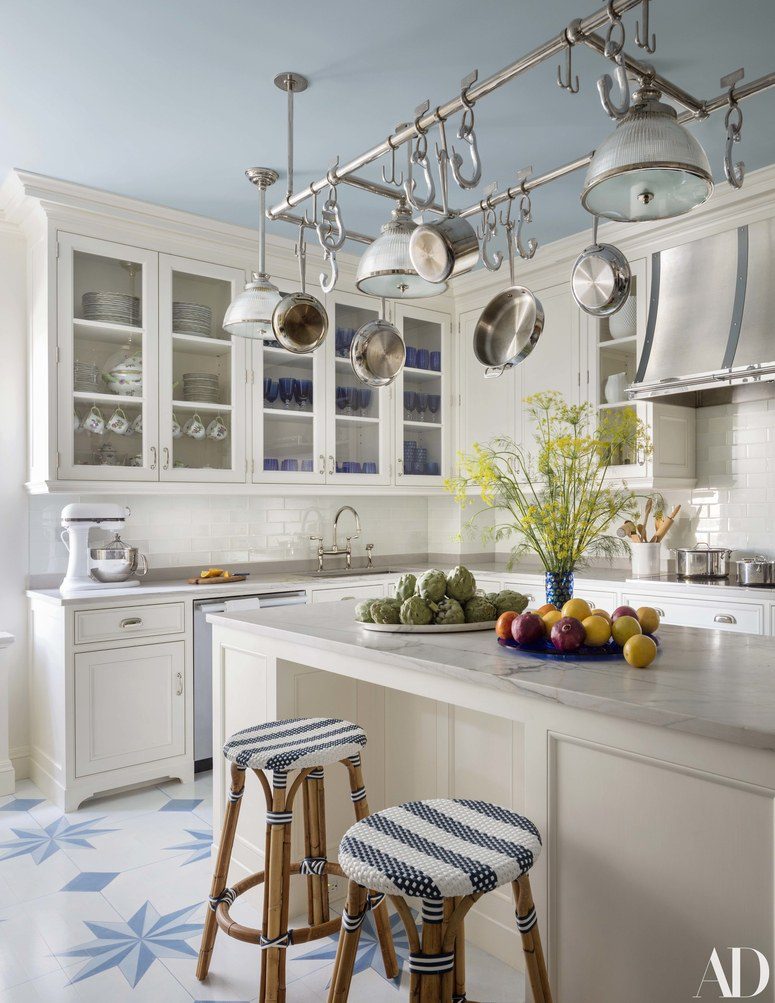 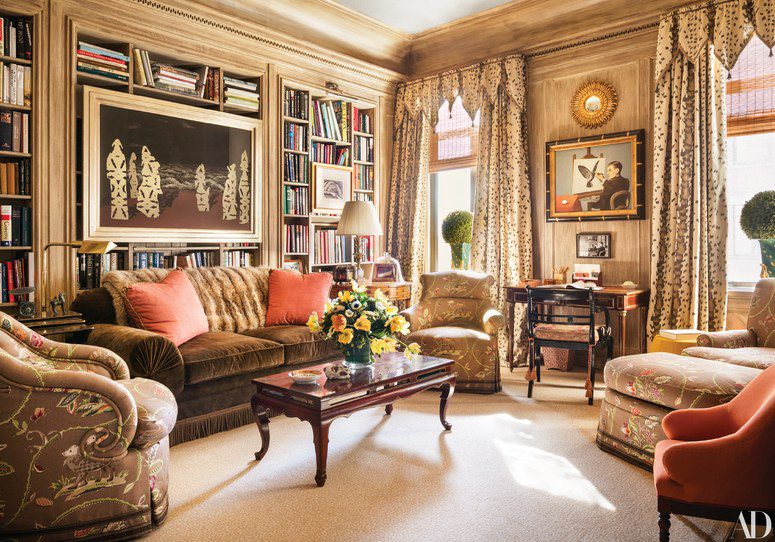 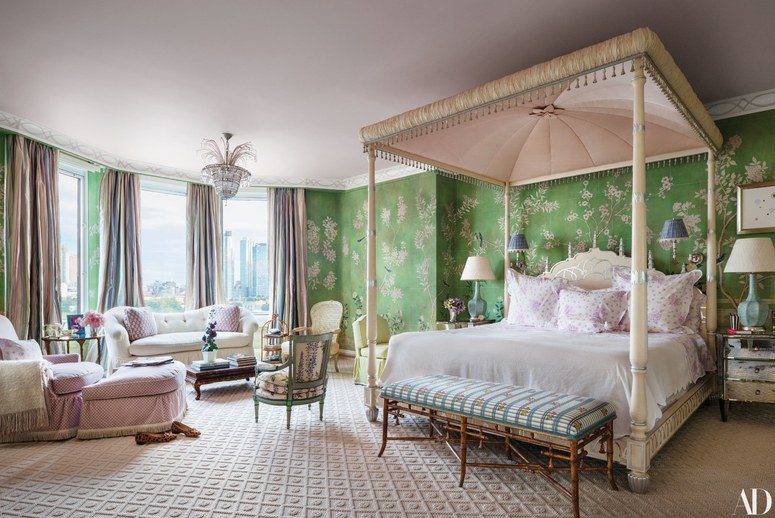 The master bedroom is swathed in a Gracie wallpaper; Buatta designed the bed. 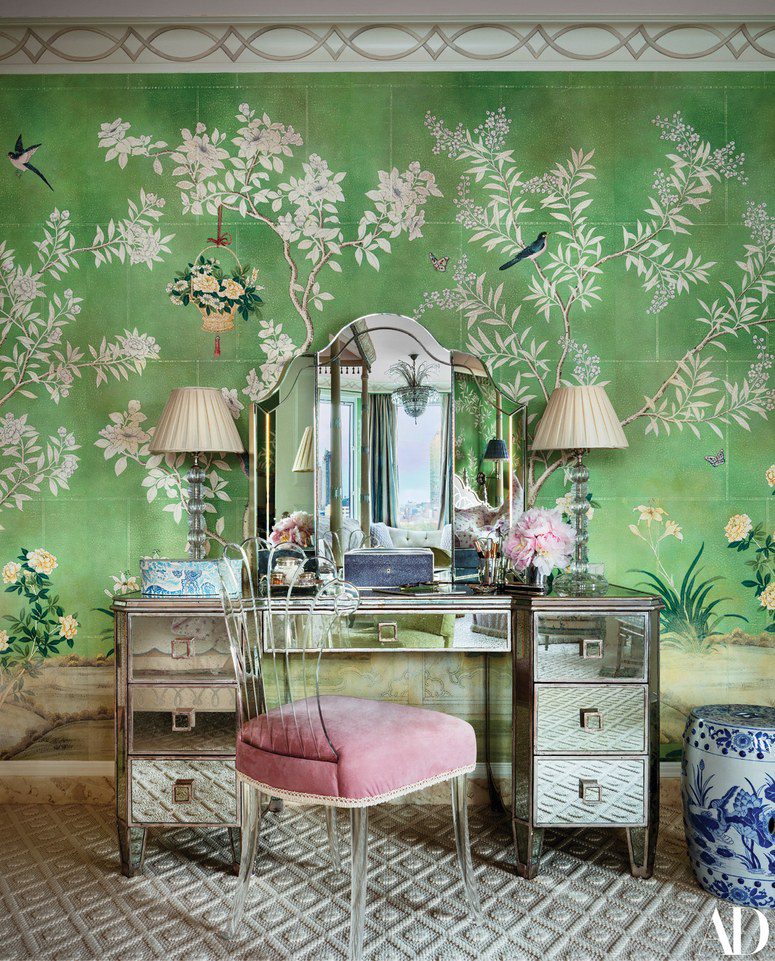 A vignette in the master bedroom. 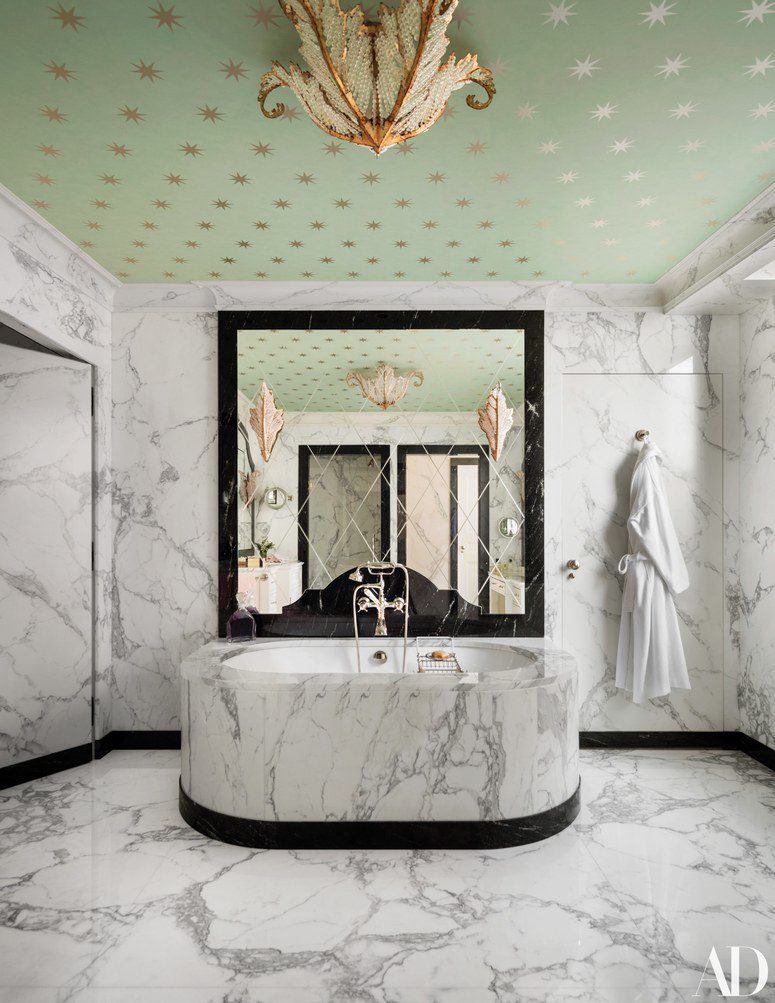 The ceiling in the marble-clad master bath is covered in an Osborne & Little wallpaper. 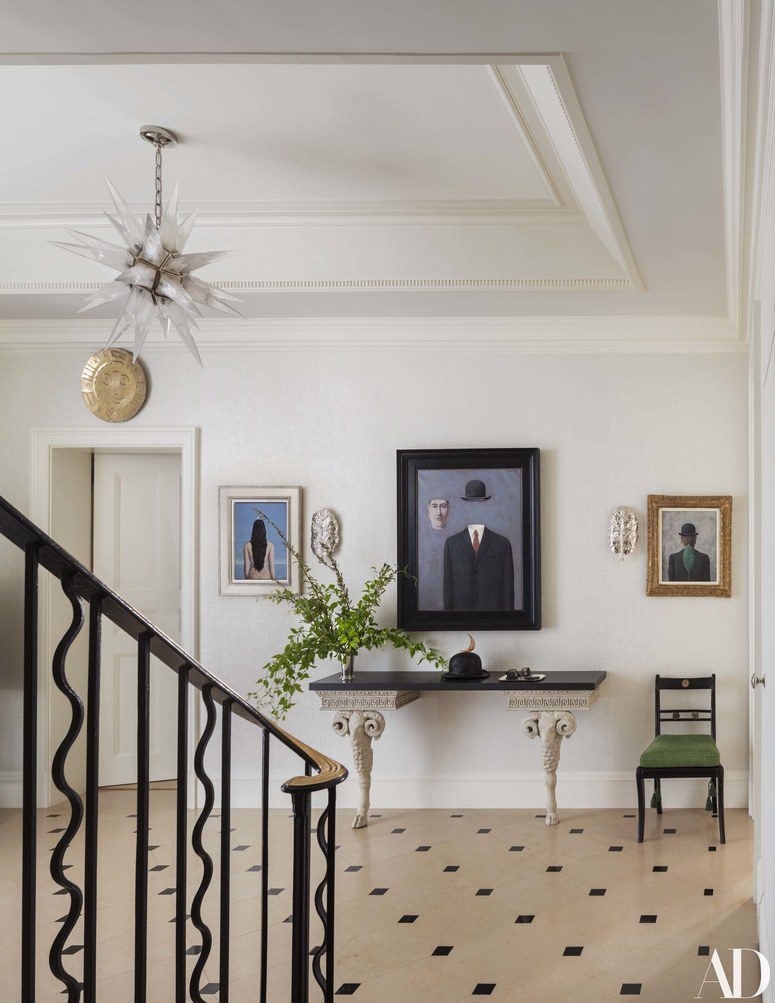 The entry features three Magritte paintings over a pair of antique consoles that Buatta joined with a new stone top.

Captions above via Architectural Digest. To read Emily’s moving feature, please visit Architectural Digest or pick up a copy of the March issue. You can also follow Emily via Instagram. And if you don’t already own Mario Buatta: Fifty Years of American Interior Decoration, it is a necessary addition to any interior designer enthusiast’s library! For more articles on Mario Buatta written by The Glam Pad, please see links below…

« The Dorothy Draper Design Weekend!
In The Pink: Dodie Thayer for Tory Burch »