Flip through Mario Buatta’s celebrated monograph (aka “The Buattapedia“), and you will see the artwork of George Oakes in nearly every one of his projects.  For enthusiasts of English interior design, the Oakes name is virtually synonymous with Colefax & Fowler, the storied firm known for originating the English Country Style that continues to inspire today.

Emily Eerdmans, author, scholar, and protégé of Mario Buatta, is pleased to present George & Lucinda Oakes: A Decorative Line, a collection of artworks by George (1927–2017) and his daughter, Lucinda. The exhibition runs from June 23 to August 20 at Eerdmans, Emily’s recently expanded Greenwich Village gallery.

A Decorative Line marks the first time the work of the father and daughter have been shown together. George’s pieces include a selection of his iconic hand-painted cushions as well as framed works. Lucinda’s work includes masterful takes on her father’s cushions, botanical sketches, a grisaille gardening trophy, and a cabinet-of-curiosities chimney board. 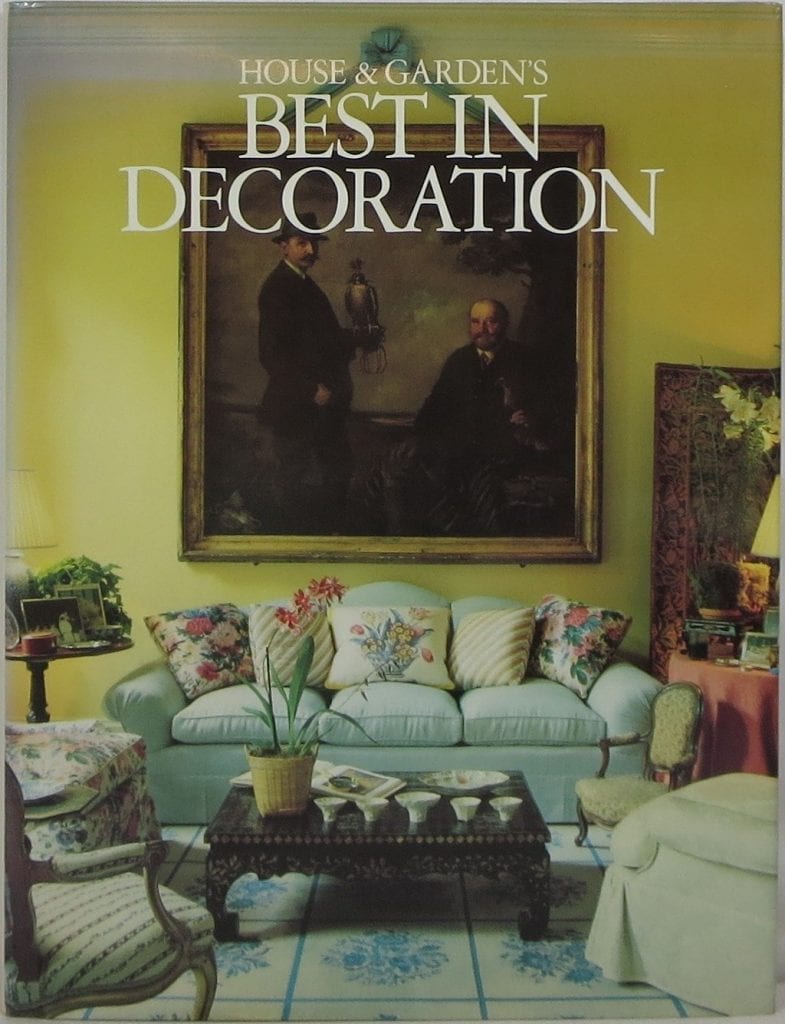 Buatta loved incorporating George Oakes’s artwork and painted cushions within his projects, and later commissioned Lucinda to make them.  Image: House and Garden’s Best in Decorating, published in 1987 with Mario Buatta’s design – and a George Oakes pillow on the cover. A hand-painted silk pillow by George Oakes in the garden room of Patricia Altschul. Photograph by Luzanne Otte. 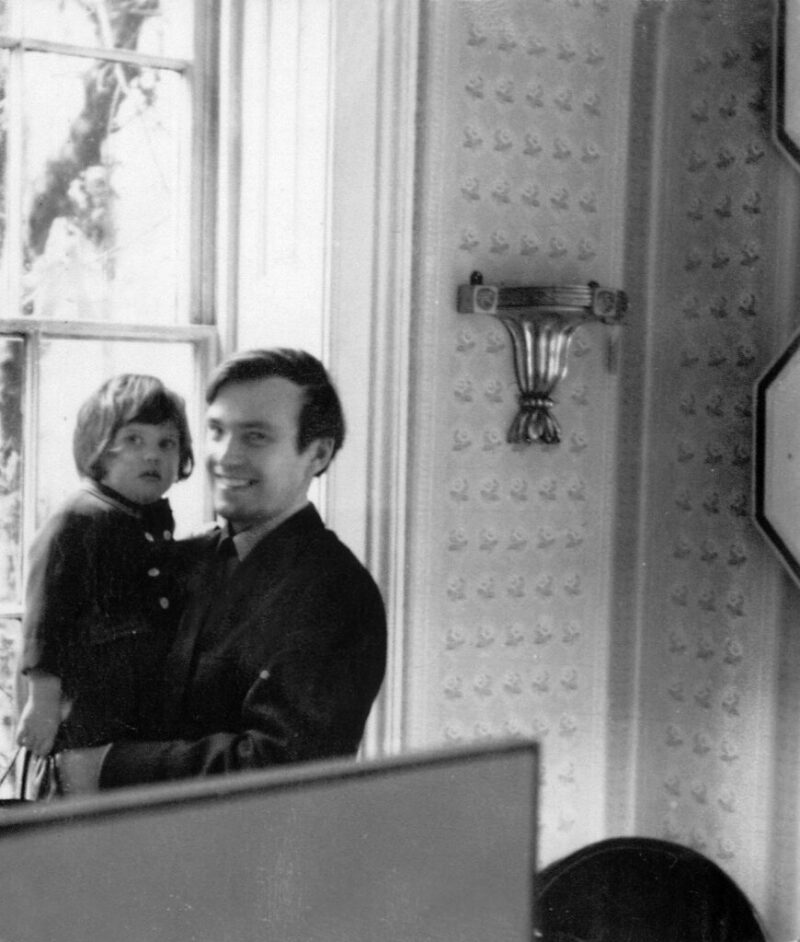 A silk cushion in progress by Lucinda Oakes. Oil on silk, 2021. George joined Colefax & Fowler in 1956 as a freelance artist. He was hired by the firm full time in 1959 where he worked for more than 30 years, eventually becoming a director. George created decorative paintings of all kinds, in addition to heading up the design studio and making designs for fabric and wallpapers. His work could be found in the finest homes in England including Nancy Lancaster‘s Haseley Court, Chiswick House, Clandon Park, Hatfield house, and Buckingham Palace. Clients included Princess Margaret, U.S. ambassador David K.E. Bruce, Lord McAlpine of West Green, and American philanthropist Bunny Mellon. 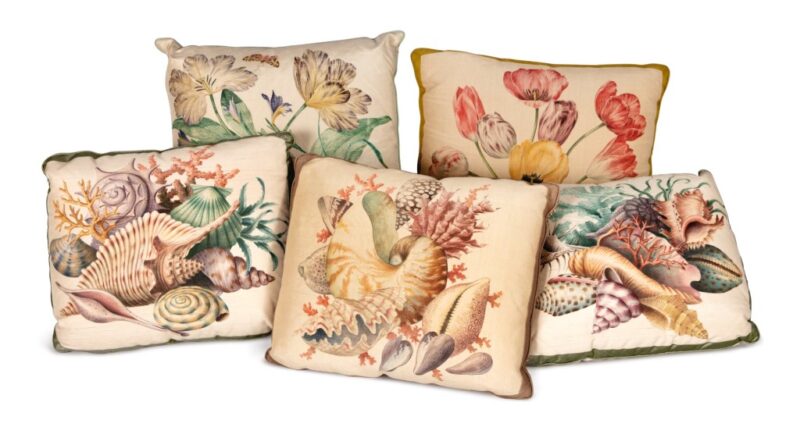 Five cushions by George Oakes from the Mario Buatta auction, Courtesy of Sotheby’s. 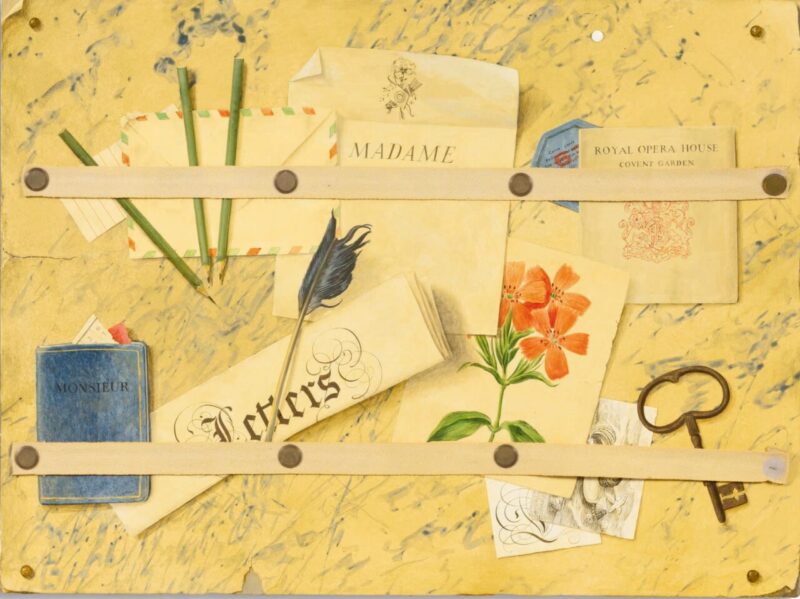 Seeing her work exhibited alongside her father’s for the first time was emotionally moving for Lucinda. “It’s a one-off, I don’t suppose it will happen again,” she said. “Emily had various pieces from Mario, but she has also bought things herself at auction of my father’s. I cannot imagine anyone else would have gathered so many bits and pieces together like that of his. I wish he could have seen it.”

Lucinda’s father continues to be her greatest source of inspiration. “My father taught me to draw really. I went to art school and received a BA and master’s of arts, but when it came to decorative painting, I learned everything from him. And I’ve got his voice his voice in my head all the time when I’m working,” she said. “He didn’t just have a great eye for composition, he had a great eye for color and originality. Even though he was working in a very traditional style, he always managed to make it slightly different… it may have been in his choice of objects for a still life or certain details that gave it a uniqueness you don’t always see in decorative painting.” Lucinda Oakes in her studio.

Lucinda grew up in the idyllic countryside of Kent surrounded by apple orchards, hop gardens, piles of Colefax & Fowler fabrics, and oodles of furniture and beautiful things from John Fowler’s personal collection that he had passed along to the family.

After earning degrees in fine art, Lucinda began her career painting on silk and selling scarves to Liberty. She was then given her first decorative painting commission in 1994 which set the course for her career.

She has worked on numerous projects around the world for private clients and interior designers including Jane Churchill Interiors, Colin Orchard Ltd, Imogen Taylor, Joanna Wood, Guy Goodfellow, William Yeoward, Goddard Littlefair, and Mario Buatta, in addition to many of the interior designers at Colefax and Fowler including Wendy Nicholls, Philip Hooper and Roger Jones.

Lucinda lives by the sea with her family in Hastings, East Sussex. She can be found most of the time in her garden, surrounded by flowers that inspire her art. A mural at Ballyfin painted by Lucinda Oakes 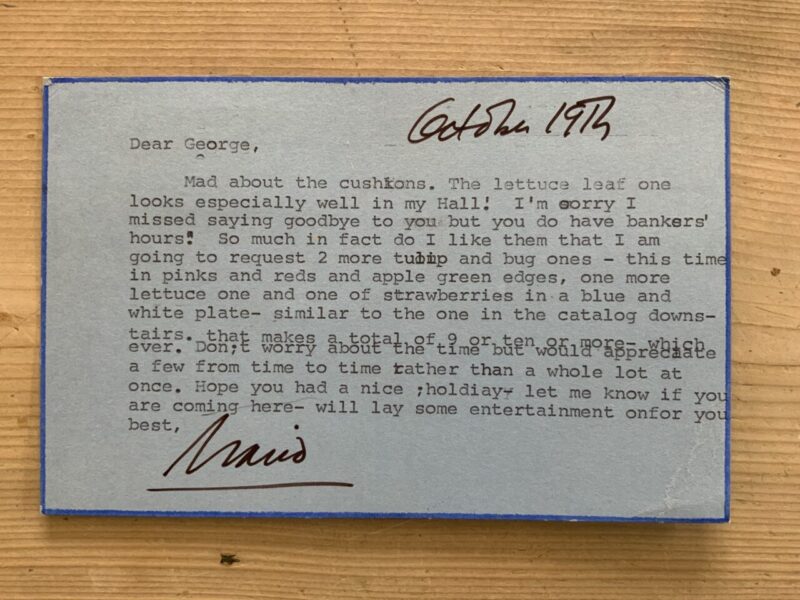 A note from Mario Buatta to George Oakes

Available Artwork from George and Lucinda Oakes | A Decorative Line Lucinda Oakes painted the silk cushions and their preparatory sketches above. The folly is based on historic designs for an Irish ice house. Image via @eerdmansnewyork

Lucinda explains the significance of her preparatory work, “I tend to get really involved with my preparatory drawings, he [George] was really keen on that, sort of quick color versions of the final piece,” she said. “You just give it the extra time and extra attention to detail, and you learn as you are going along, more and more I think, of how to get it right. If you do your preparatory work really well, then when you come to do the actual thing, you can do it with confidence and panache. Because on the final product, especially when painting on fabric, you can’t be tentative, you just have to go for it and you can’t really make a mistake.” 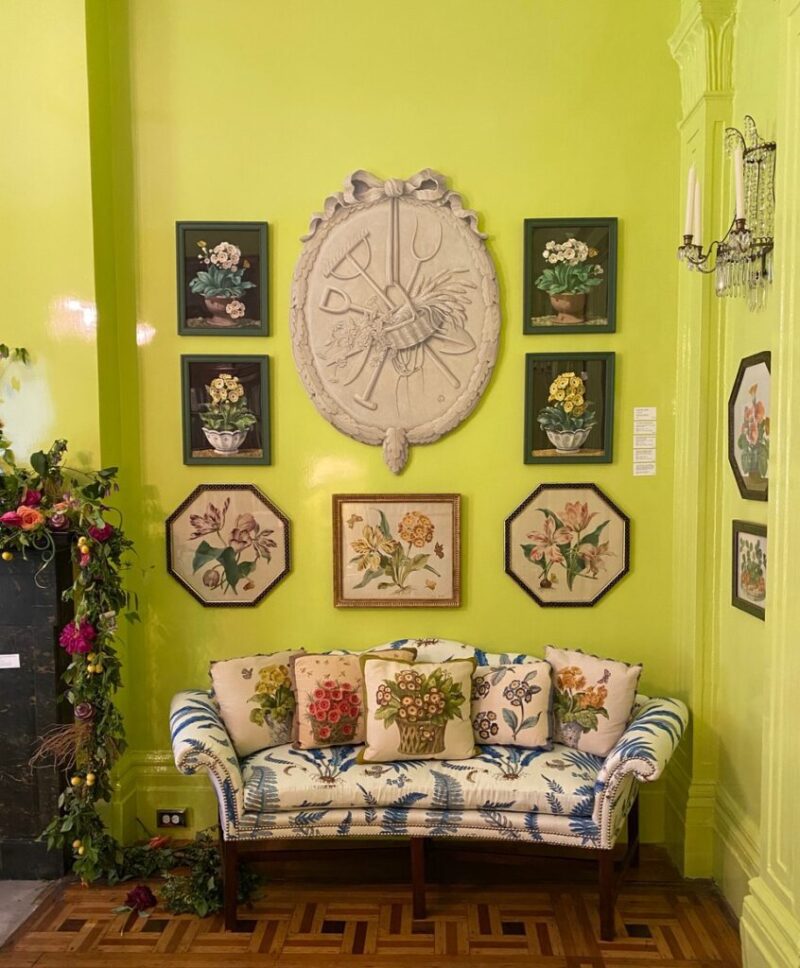 Lucinda says, “I do try to copy – particularly with the silk painting – his sort of brush strokes or his drawing because I like it so much – it is  light, kind of flowing, but really strong.  There is no weakness to the drawing and it is lifelike.” 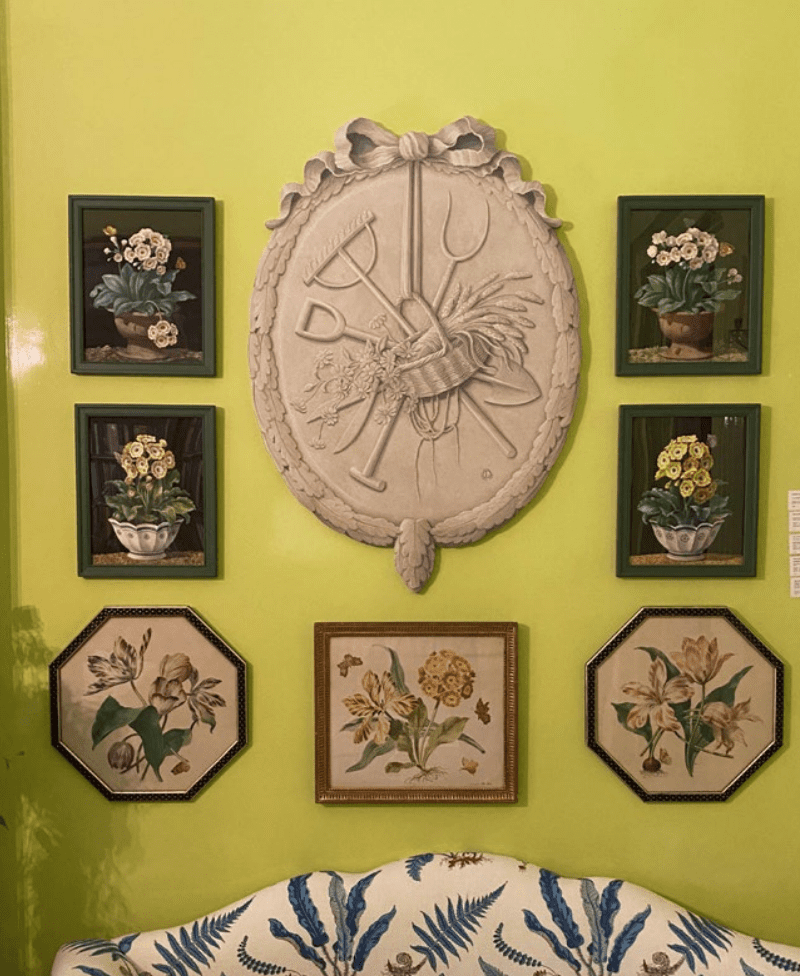 Lucinda’s oil-on-board gardening trophy, rendered in grisaille is a beautiful example of her trompe l’oeil. Her inspiration was Bunny Mellon’s garden room at her Oak Spring estate in Upperville, Virginia.

Inspired by old photographs she’d taken at the Natural History Museum in London, Lucinda worked from her collection of specimens to create a chimney board filled with curiosities. 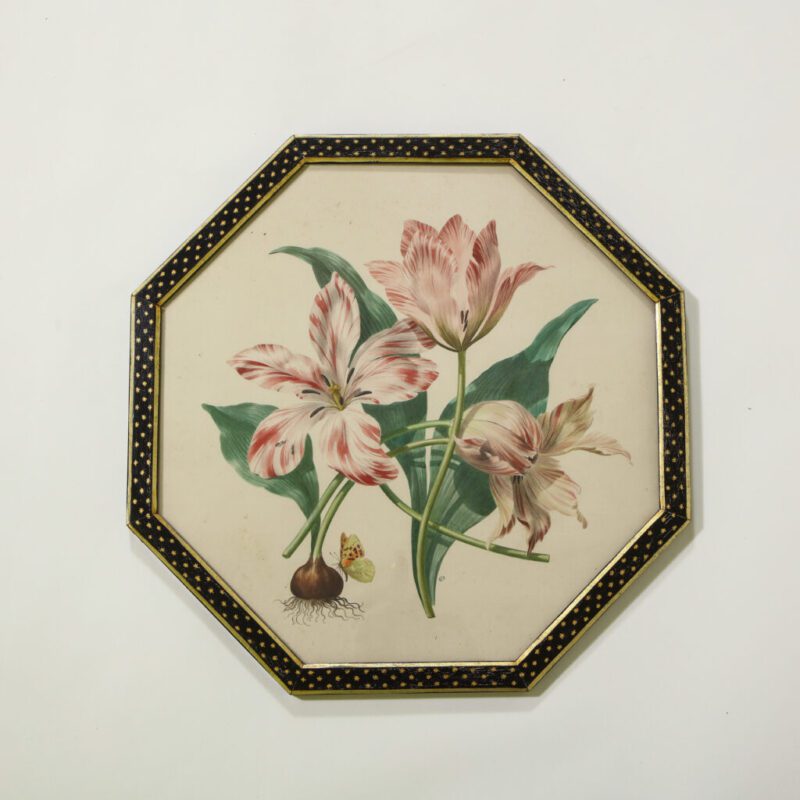 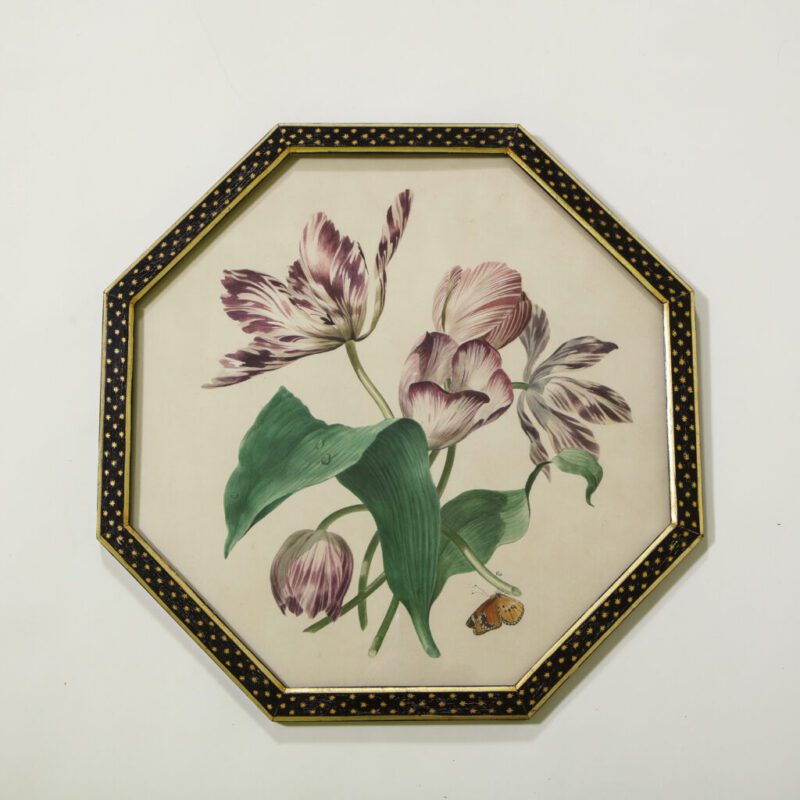