Today I am delighted to welcome Luzanne Otte as she returns for the second installment of our six-part series on Patricia Altschul‘s charmed life and home (decorated by the legendary Mario Buatta.)  As Patricia’s dear friend, Luzanne has gained intimate knowledge of the television star, author, historian, and collector’s life… And with Patricia’s approval, of course, she is guest posting her insider secrets! Last week Luzanne shared a detailed account of her experience as Patricia’s houseguest, and today she is analyzing Patricia’s substantial collection of antique silhouettes. With degrees from the University of Southern California, Harvard, and Notre Dame, Luzanne begins today’s post with a scholarly history lesson.

“This article is the most academic and substantial of the series,” she laughs. “Scholarly types will appreciate the depth, and I hope others will expand their purview to include an art form that’s perpetually at risk of falling into desuetude.  The enchanting silhouettes displayed on the stair hall piqued my interest for their simple yet versatile aesthetic, as well as my general lack of knowledge of the subject. I had always associated silhouettes exclusively with busts hand cut from black paper; a novelty I enjoyed as a child at Disneyland and the LA Country Club.  When I began researching the dynamic and often contradictory historical record, I felt emboldened to synthesize primary source material and provide readers a high-level overview of the storied art.”

I hope you enjoy the history along with Luzanne’s interview with Patricia, which includes exclusive pictures and details of her collection. Welcome, Luzanne! 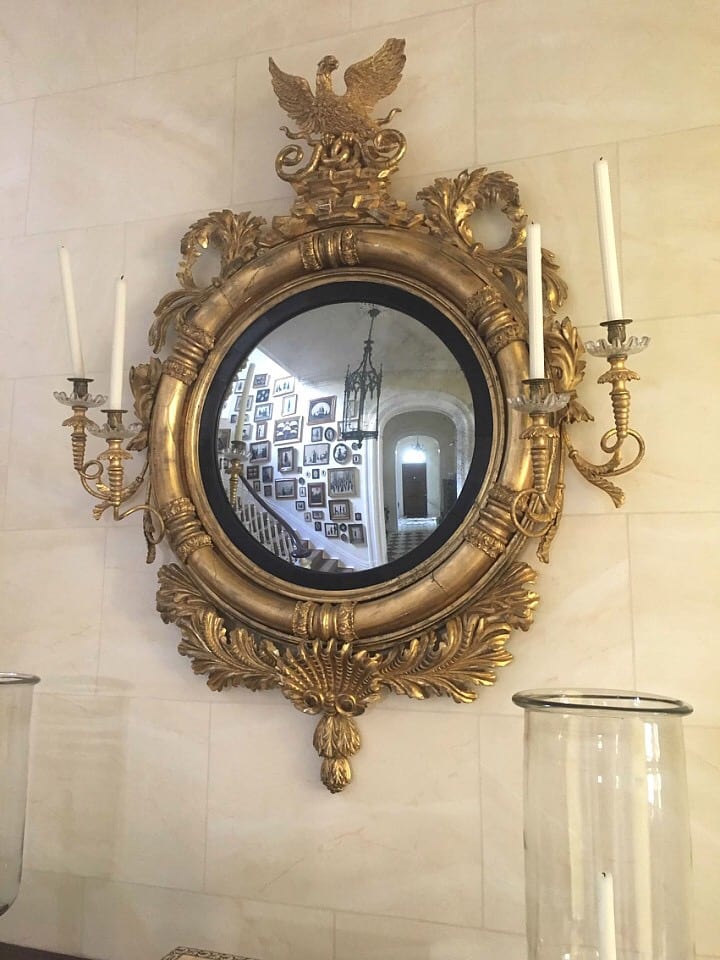 One sloping cut made forehead, nose, and chin,
A nick produced a mouth and made him grin
~ Jonathan Swift 1720

Evolution of a Shadowy Art

In pinpointing the origins of silhouette likenesses, also known as shade portraits or profile likenesses, art historians trace back to prehistoric cave drawings, Egyptian hieroglyphics, Grecian vessels, and the Chinese paper cutwork of Antiquity. In an 1806 letter to the painter Philipp Otto Runge, Johann Wolfgang von Goethe noted the relationship between black

figured Grecian vessels and the silhouettes of his contemporaries. “I like to feel that by silhouettes two irrevocably sundered ages are drawn together.” While the function of the art in Antiquity and the Modern Period varied, both forms reduced three-dimensional figures to simple contours emboldened by the interplay of light/dark and contrast of positive/negative space.

Prior to the advent of photography, silhouette likenesses offered an affordable and efficient alternative for those who could not afford a formal portrait. Profilists or silhouettists captured a subject’s likeness with physiognomic accuracy through a machine to trace the shadow cast by a profile then cut the outline, painting, drawing, cutwork, or a combination of each. Modernly, we tend to associate the term silhouette almost exclusively with a hand-cut black bust set upon white paper. However, the term silhouette is more accurately understood as describing the general form of portraiture.

By the turn of the 19th century, the advent of photographic portraits led to the decline of silhouettes as a popular art form. While silhouette portraiture was considered passé to a majority of the population, a minority continued to support the art for various reasons. The primary reason asserted is that photographs capture a dynamic range of expressions, whereas the linear nature of an individual’s profile captured in black and white transcends temporal limitations. In other words, its bold simplicity is captivating. 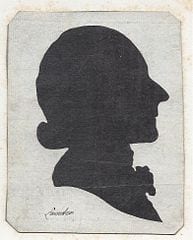 The first profile likeness in the historical record is a non-extant rendering of Monarchs William and Mary by Elizabeth Rhijberg in 1699, but the novelty’s heyday would not commence until the 1770s. It was then that Swiss philosopher-preacher-scientist, Johann Casper Lavater, catapulted profile likenesses into the international consciousness with bestseller, Essays on Physiognomy; For the Promotion of the Knowledge and the Love of Mankind (1774). 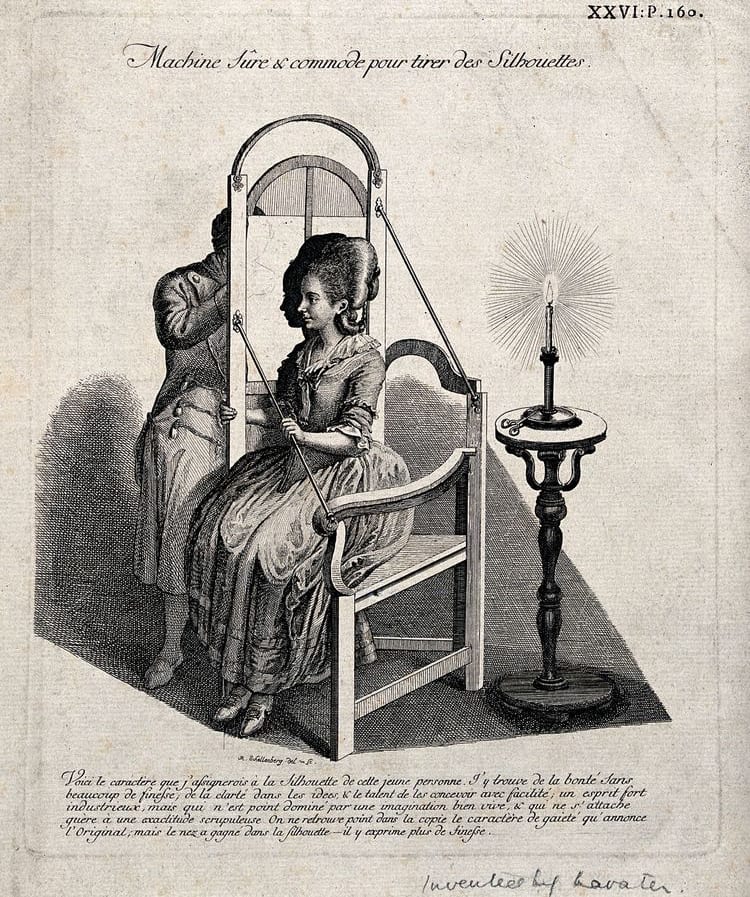 Physiognomy explores the relationship between facial features and personality traits. A machine called the physiognotrace cast a shadow on the subject’s profile and a machinist traced its outline. “To be a physiognomist, the study of silhouettes is most essential; it is by silhouettes, the physiognomist will exert and improve his tact; if he comprehends that language, he will possess an understanding of the countenance of man, he will read in it, as in an open book.” While the tenets of this pseudo-science were never fully embraced by the academy, Lavater’s publications had the unintended effect of introducing profile likenesses as an inexpensive and instantaneously generated alternative to the traditional painted portrait. 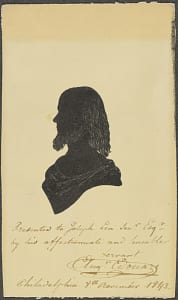 Auguste Edouart emigrated from France to England following the Napoleonic Wars and focused on hair work before identifying a need in the art market for full-length likenesses cut freehand rather than by machine. Edouart found the likenesses produced by machine to be inanimate and contemptible to his refined sensibilities. The long-suffering Edouart sought to establish a reputation as a freehand virtuoso and distinguish himself as an artist among machinists. He addressed these topics, among other grievances and vexations, in A Treatise on Silhouette Likenesses (1835).

“Why does such prejudice exist against black shades, which I call Silhouette Likenesses? Persons who have an opportunity of judging and comparing my works, which have been executed by the hands, with those executed by mechanical process, cannot help making a comparison of the prices, even while they give me the preference for the execution of the work” (pp. 97-98). 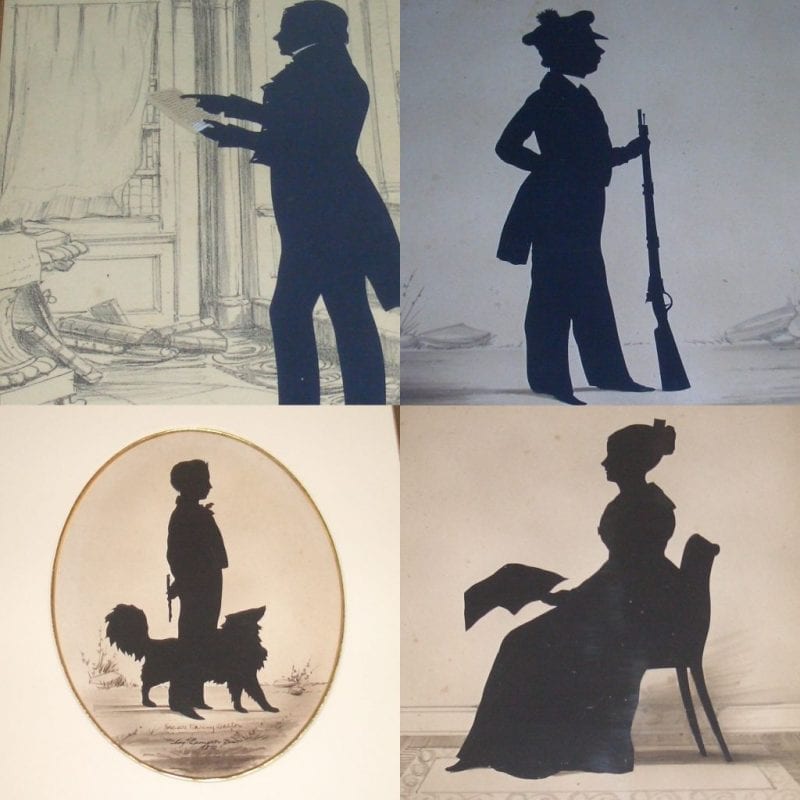 Four silhouettes of many by Edouart in the Altschul collection. In addition to expanding profiles to full-length, a distinguishing trademark of his work is the ubiquitous white collar on male subjects. Emerging artists sketched 18 backgrounds (or substrate) which were reproduced en masse. Layering two pieces of paper, Edouart brandished a pair of embroidery scissors and cut the subject’s likeness in an average of 2 minutes. One was affixed to the substrate and embellished with subtle detail work, and the other retained for his personal archive.

Edouart begins by explaining the origin of “silhouette” likenesses. The eponymous term refers to a profilist and French Minister of Finance, Ètienne de Silhouette, who served during the reign of King Louis XV. Silhouette’s parsimonious policies led to his name being associated with all things miserly. It was during his tenure that profile likenesses produced by shadows became fashionable in France. Artists derisively referred to the cheap profile likenesses as portraits a la Silhouette. By retaining the French name in the English-speaking world, Edouart infused “the poor man’s portrait” with a certain je ne sais quoi and distinguished his handmade likenesses from crude machine productions. 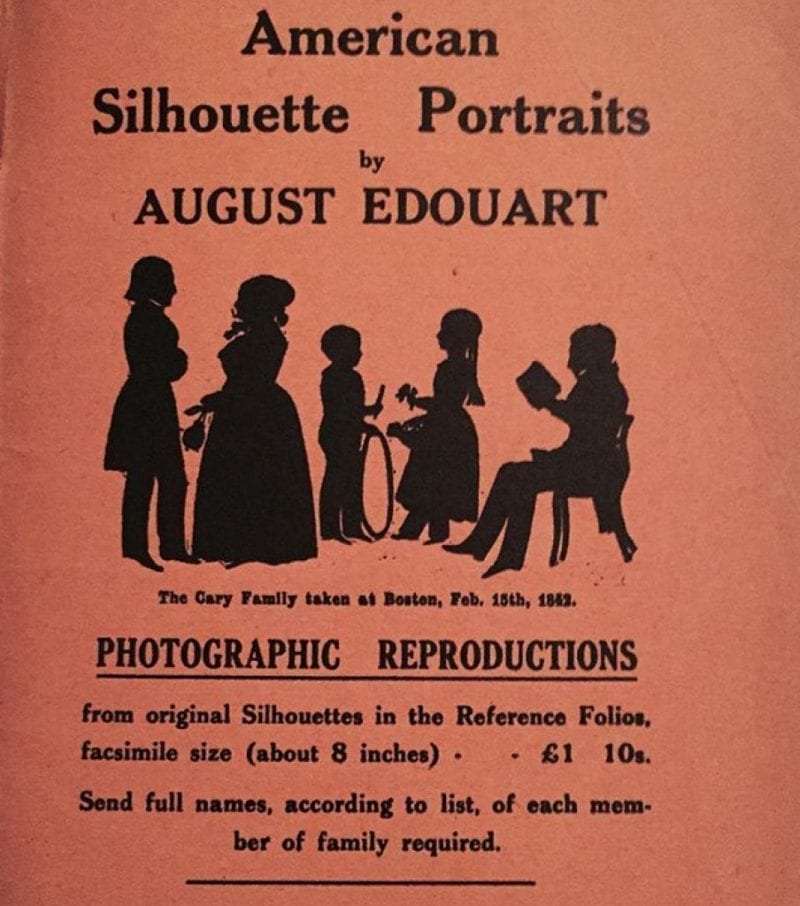 An advertisement for one of the itinerant artist’s many journeys to America. A comprehensive portfolio of his work may be seen in, Auguste Edouart’s Silhouettes of Eminent Americans, 1839-1944

A more accurate title for the Treatise might be, The Role of Idiosyncratic Trait Definitions in Self-Serving Assessments of Ability. Prejudice notwithstanding, the disquisition elevated the general prestige of the art form and firmly established Edouart as the preeminent silhouettist of the Victorian era.

Interview with Patricia Altschul about her Silhouette Collection 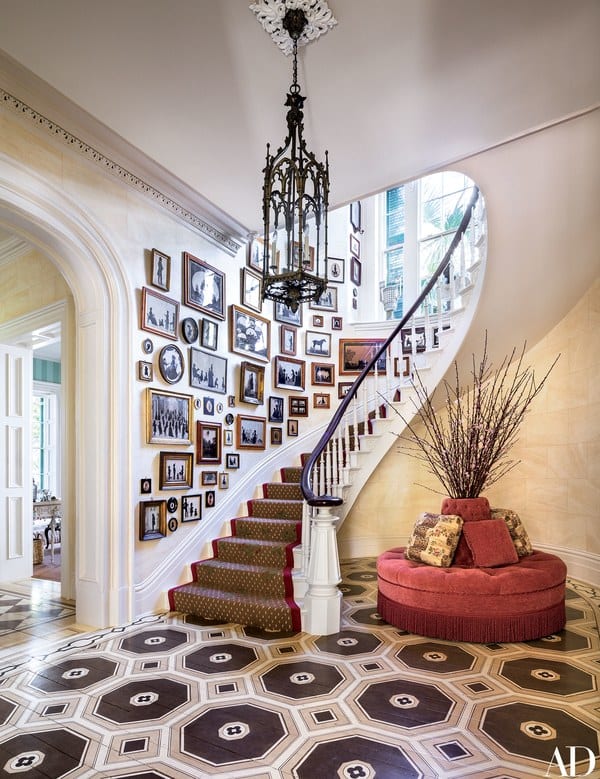 Luzanne: Do you recall your first exposure to the world of silhouettes?

Patricia: My Father was a diplomat and Medical Inspector to the Far East under President Franklin Roosevelt. The beautiful objects he gifted my Mother were formative in my development as a collector. Growing up, we had a few charming silhouettes in the house and I expanded the collection with Arthur [Altschul] to include every incarnation of the art form.

Patricia: Arthur taught me a great deal about the art of collecting. We were drawn to different types of art to be sure, but one of our favorite pastimes was scouring antique stores, flea markets, and galleries throughout the world for new art and antique acquisitions. A well-rounded collection includes the high and the low.

Luzanne: What would you say to those who associate collecting with a hobby reserved to the One Percent?

Patricia: Collecting is for everyone. Let me add that collecting doesn’t equate to hoarding – although the antique China pug figurines that threaten to overtake the first floor may suggest otherwise. There are myriad motivations for each of my collections – some evoke pride in owning exquisite objects (compounded when acquired for a bargain), others bolster a connection to my personal history, and others are simply fun. Whatever inspires me, I collect and I count anything as a collection from 18th century French clocks to animated plush toys like the iguana who sings Feliz Navidad.

Luzanne: Among your vast antique silhouette collection, do you have a favorite?

Patricia: I gravitate to the exquisite detail in British silhouettes, as their American counterpart tend to be more rudimentary. My aesthetic favorite is the conversation piece by Francis Torond. My historical favorite is the profile of George Washington by Samuel Folwell.

Luzanne: As far as I can tell, you have at least one work by every major silhouettist. Are there any gaps in your collection that you’d like to fill?

Patricia: [Looking at the hundred or so silhouettes in the stair hall] Even if I had a theoretical gap to fill, I would need a physical gap in which to fill it. 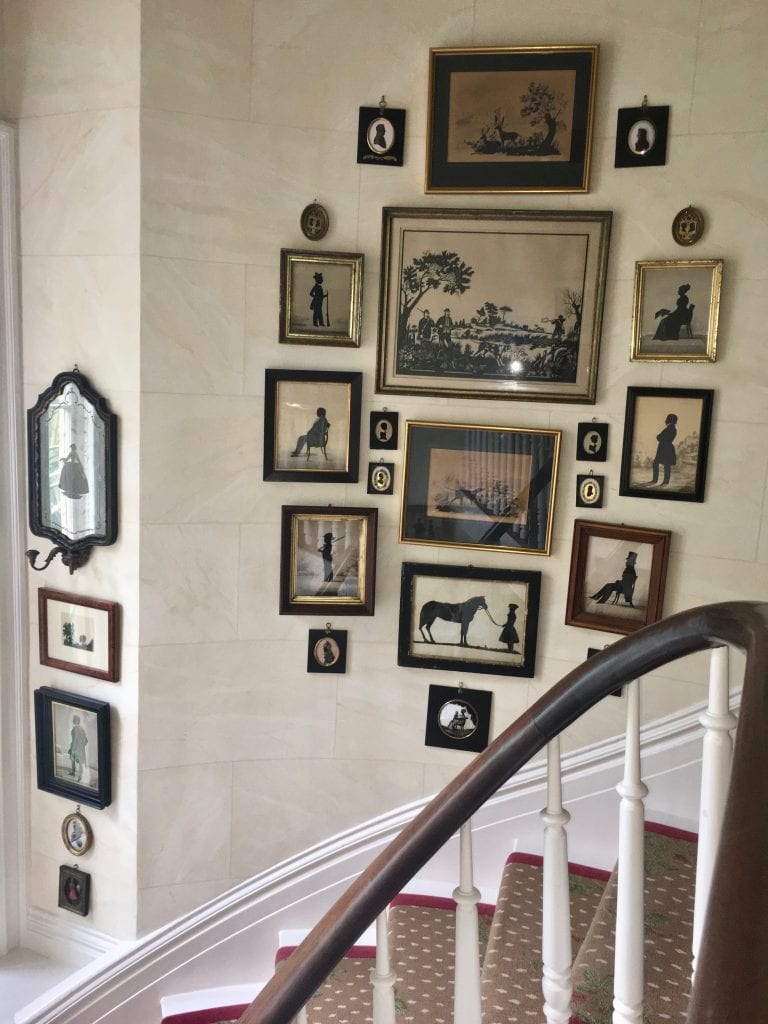 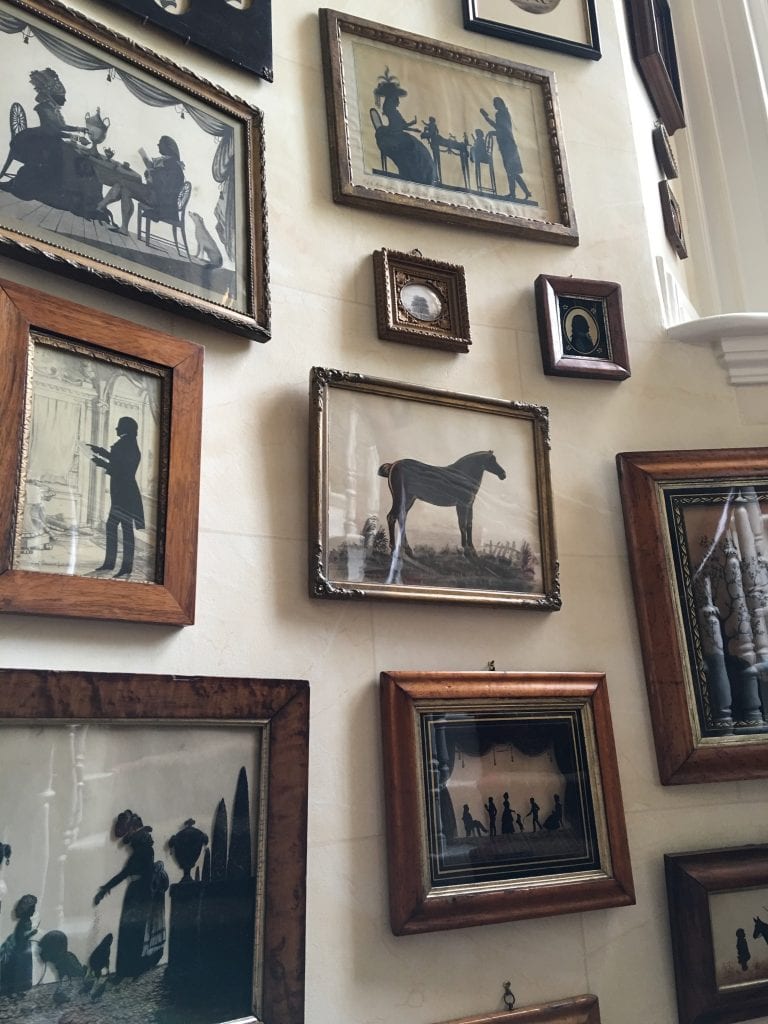 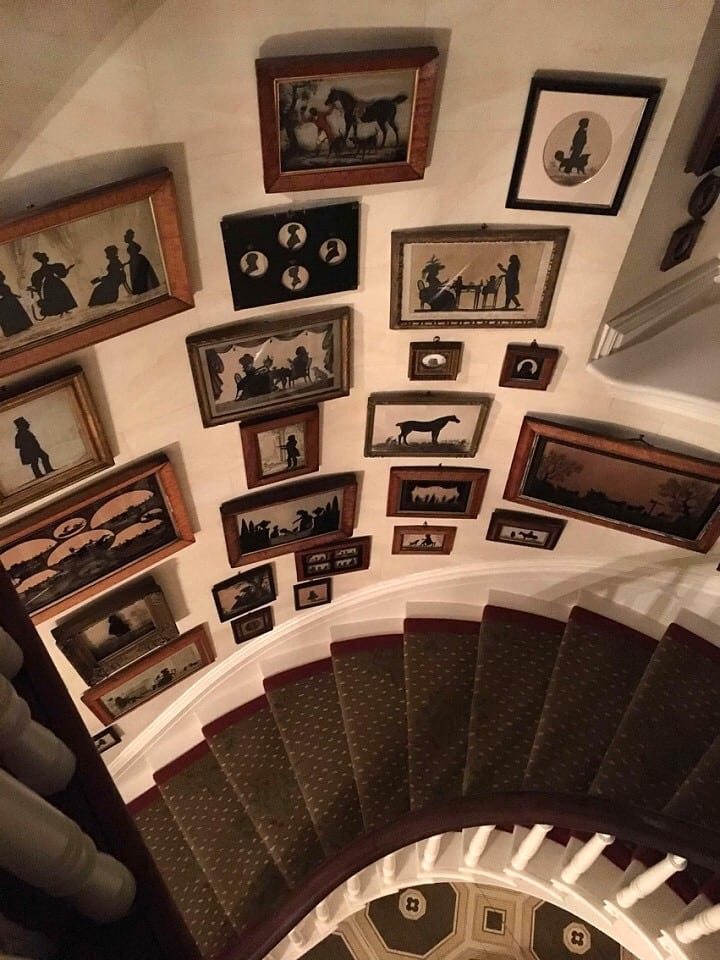 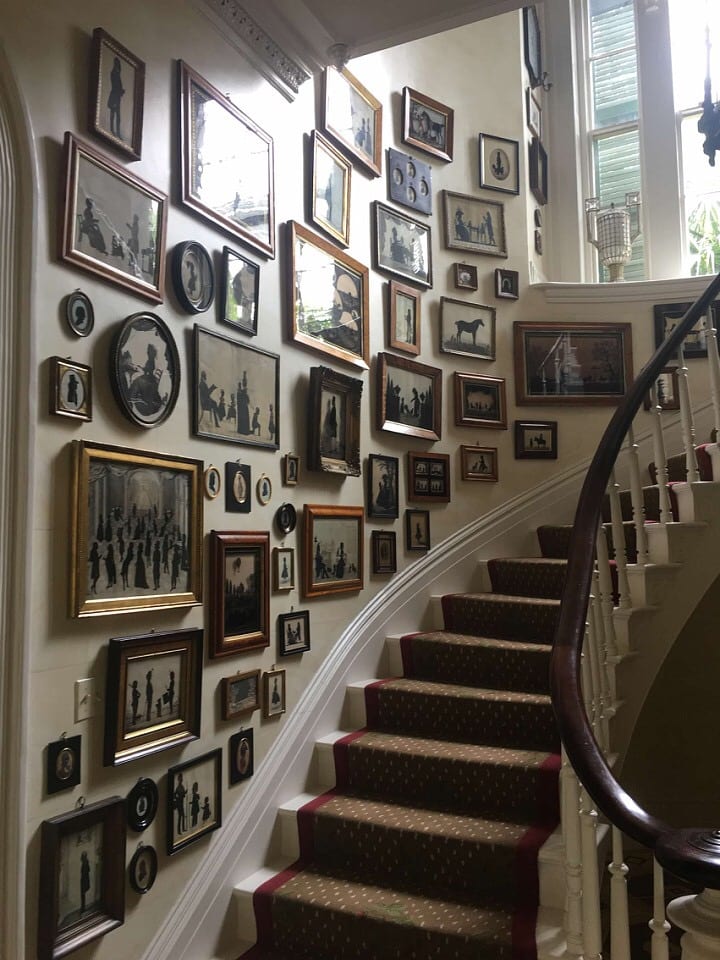 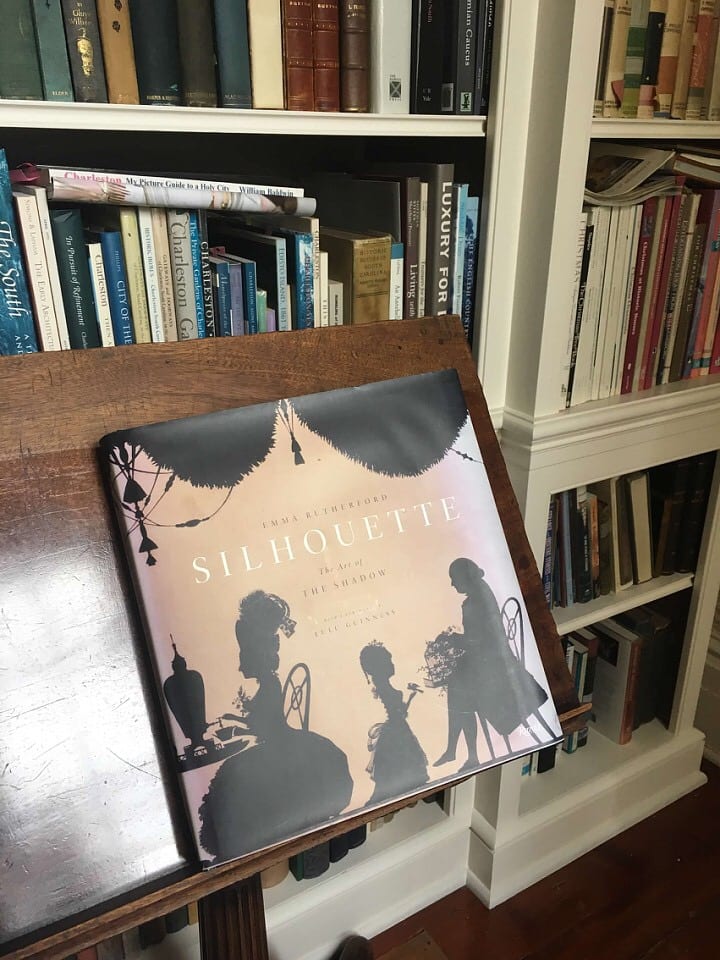 Silhouette: The Art of the Shadow 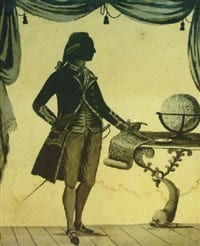 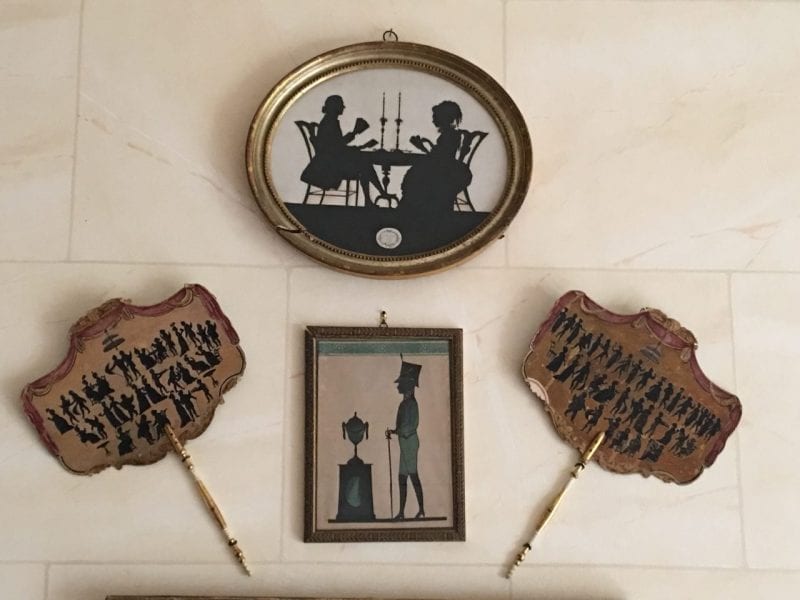 Description (for above in oval frame): A silhouette conversation piece of James and Florence Lowther seated at a table, engaged in a game of cards: he, facing right wearing a frock coat; she, facing left wearing dress and fur stole, her hair in a banging chignon, the table dressed with candlesticks, snuffer and tray (1784). It’s valuable for a variety of reasons: signed and dated by a master silhouettist who rarely comes on the market, named subjects, original frame. Size: 11.1” round; Materials and Technique: Painted on laid paper with original gilded gesso frame with beaded border. 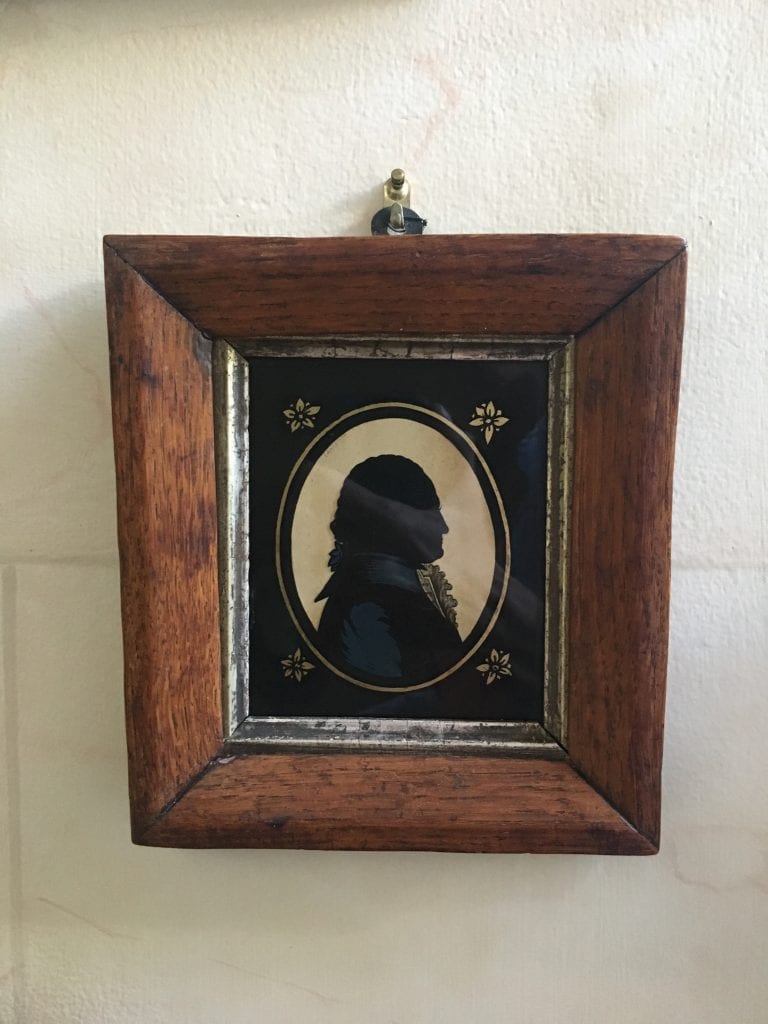 Description (for above): Bust profile of George Washingon facing right, eyelashes delineated, wearing a buttoned coat, frilled cravat, hair tied with a ribbon. This is the only silhouette of Washington painted from life. Legend has it that Washington was an unsuspecting subject while attending a church service. Folwell sought to capture a sacred moment in the new country’s history by attempting a visual statement on the condition of its leader (1791). Size: 3.25″ x 2.5”; Materials and Technique: Laid paper painted in India ink with details added in white. Early oak and gilt frame on eglomisè glass. 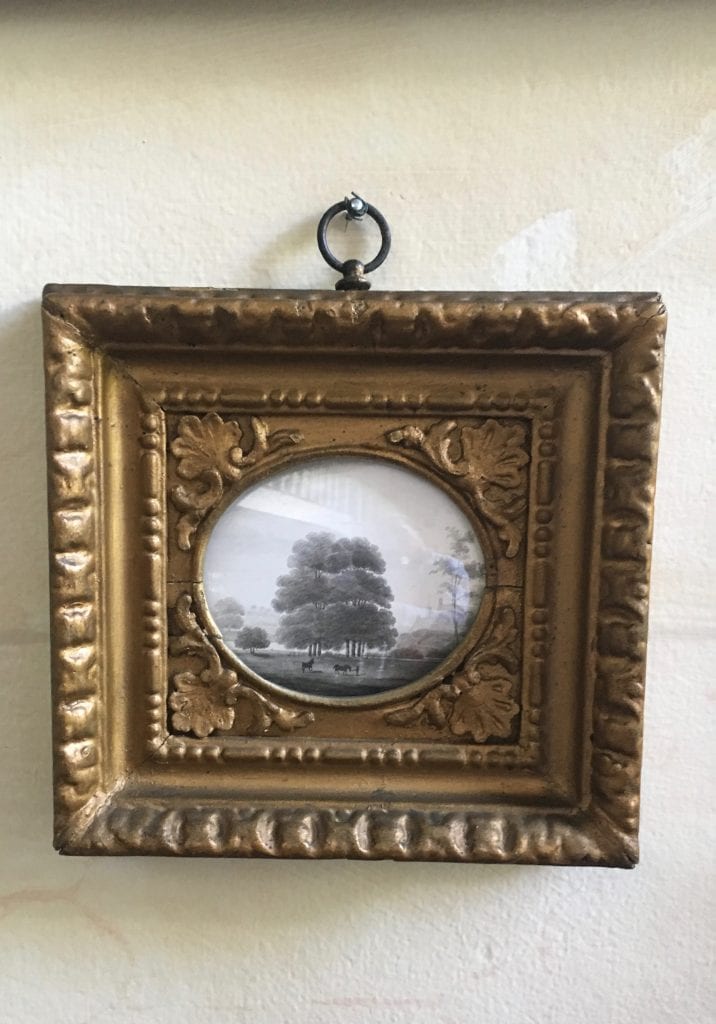 Description (for above): Part of the Lawn and Keep, Cardiff Castle. Exhibited at the Royal Academy. Despite Field producing a number of landscape at his shop on the Strand with silhouette master, John Miers, the miniatures are exceedingly rare in the marketplace (1825). Size: 2.5” x 2.5”; Materials and Technique: A miniature painted on plaster in monochrome and penciled with gold. Rectangular gilded composition frame. 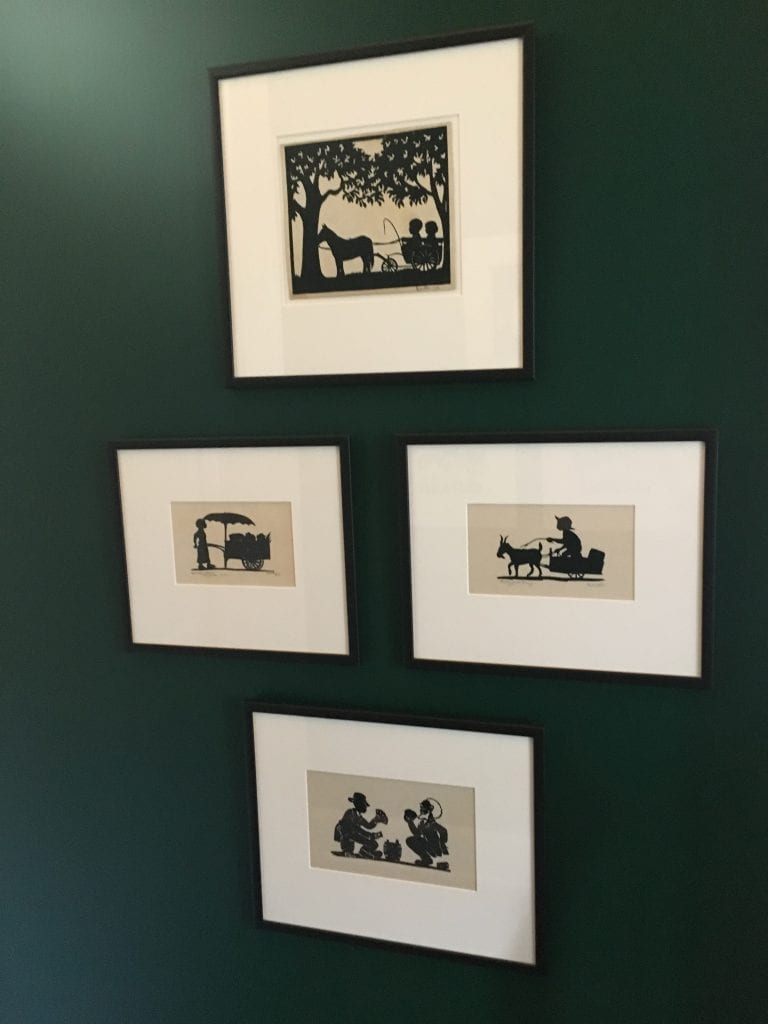 Charlestonian, Carew Rice, thought of his work as a love letter to the marginalized members of the Low Country. Although his silhouettes were inspired by principles, Rice was also a pragmatist who successfully tapped into the commercial market for Old South nostalgia: picturesque landscapes, iron gates, wildfowl. 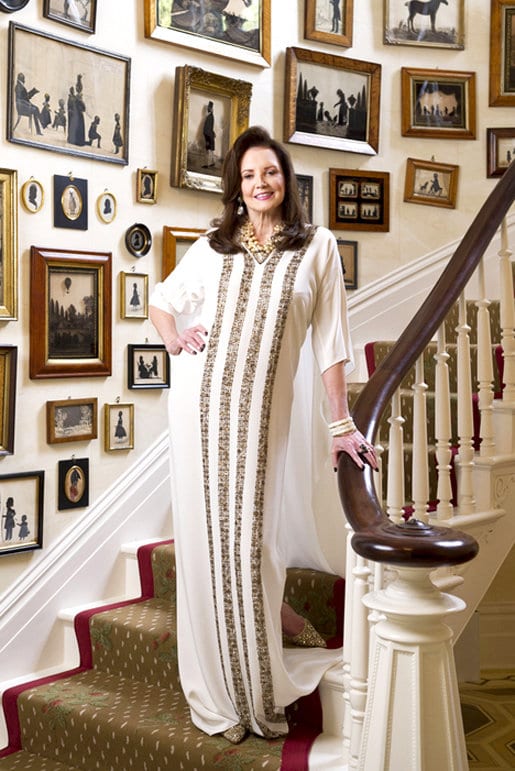 Wow, what a rich history, I am now inspired to expand my small silhouette collection! Please check back next Wednesday for Luzanne’s third guest post. Click here to read Luzanne’s detailed account of her experience as Patricia’s houseguest, and you won’t want to miss her guest post “A Day in the Life of Southern Charm’s Patricia Altschul” featured via Town & Country.  You might also enjoy my past features:

Thank you Luzanne and Patricia!